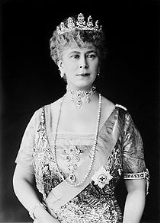 Overview
Mary of Teck was the queen consort
Queen consort
A queen consort is the wife of a reigning king. A queen consort usually shares her husband's rank and holds the feminine equivalent of the king's monarchical titles. Historically, queens consort do not share the king regnant's political and military powers. Most queens in history were queens consort...
of the United Kingdom
United Kingdom
The United Kingdom of Great Britain and Northern IrelandIn the United Kingdom and Dependencies, other languages have been officially recognised as legitimate autochthonous languages under the European Charter for Regional or Minority Languages...
and the British Dominions, and Empress of India
Emperor of India
Emperor/Empress of India was used as a title by the last Mughal emperor Bahadur Shah II, and revived by the colonial British monarchs during the British Raj in India....
, as the wife of King-Emperor George V
George V
George V was king of the United Kingdom and its dominions from 1910 to 1936.George V or similar terms may also refer to:-People:* George V of Georgia * George V of Imereti * George V of Hanover...
.

Although technically a princess of Teck
Teck
Teck was a ducal castle in the kingdom of Württemberg, immediately to the north of the Swabian Jura and south of the town of Kirchheim unter Teck , taking its name from the ridge, 2544 feet high, which it crowned. It was destroyed in the German Peasants' War...
, in the Kingdom of Württemberg
Kingdom of Württemberg
The Kingdom of Württemberg was a state that existed from 1806 to 1918, located in present-day Baden-Württemberg, Germany. It was a continuation of the Duchy of Württemberg, which came into existence in 1495...
, she was born and brought up in the United Kingdom. Her parents were Francis, Duke of Teck
Francis, Duke of Teck
Francis, Duke of Teck , was a member of the German nobility, and later of the British Royal Family. He was the father of Queen Mary, the wife of King George V...
, who was of German extraction, and Princess Mary Adelaide of Cambridge
Princess Mary Adelaide of Cambridge
Princess Mary Adelaide Wilhelmina Elizabeth of Cambridge was a member of the British Royal Family, a granddaughter of George III, and great-grandmother of Elizabeth II. She held the title of Duchess of Teck through marriage.Mary Adelaide is remembered as the mother of Queen Mary, the consort of...
, a member of the British Royal Family
British Royal Family
The British Royal Family is the group of close relatives of the monarch of the United Kingdom. The term is also commonly applied to the same group of people as the relations of the monarch in her or his role as sovereign of any of the other Commonwealth realms, thus sometimes at variance with...
. To her family, she was informally known as May, after her birth month. At the age of 24 she was betrothed to Prince Albert Victor, Duke of Clarence and Avondale, the eldest son of the Prince of Wales, but six weeks after the announcement of the engagement he died unexpectedly of pneumonia
Pneumonia
Pneumonia is an inflammatory condition of the lung—especially affecting the microscopic air sacs —associated with fever, chest symptoms, and a lack of air space on a chest X-ray. Pneumonia is typically caused by an infection but there are a number of other causes...
.