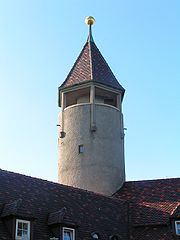 Teck was a ducal
Duke
A duke or duchess is a member of the nobility, historically of highest rank below the monarch, and historically controlling a duchy...
castle in the kingdom of Württemberg
Württemberg
Württemberg , formerly known as Wirtemberg or Wurtemberg, is an area and a former state in southwestern Germany, including parts of the regions Swabia and Franconia....
, immediately to the north of the Swabian Jura and south of the town of Kirchheim unter Teck
Kirchheim unter Teck
Kirchheim unter Teck is a town in Baden-Württemberg, Germany, in the district of Esslingen. It is located on the small river Lauter, a tributary of the Neckar. It is situated near the Teck castle, approximatively 25 km southeast of Stuttgart...
(now in the district of Esslingen
Esslingen (district)
Esslingen is a district in the centre of Baden-Württemberg, Germany. Neighboring districts are Rems-Murr, Göppingen, Reutlingen, Böblingen and the district-free city Stuttgart.-History:...
), taking its name from the ridge, 2544 feet high, which it crowned. It was destroyed in the German Peasants' War
German Peasants' War
The German Peasants' War or Great Peasants' Revolt was a widespread popular revolt in the German-speaking areas of Central Europe, 1524–1526. At its height in the spring and summer of 1525, the conflict involved an estimated 300,000 peasants: contemporary estimates put the dead at 100,000...
(1525). The castle was reconstructed during the 19th and 20th centuries.

In 1863, the title "Prince of Teck" was conferred as a courtesy title
Courtesy title
A courtesy title is a form of address in systems of nobility used for children, former wives and other close relatives of a peer. These styles are used 'by courtesy' in the sense that the relatives do not themselves hold substantive titles...
by King William I of Württemberg
William I of Württemberg
William I was the second King of Württemberg from October 30, 1816 until his death.He was born in Lüben, the son of King Frederick I of Württemberg and his wife Duchess Augusta of Brunswick-Wolfenbüttel .-First marriage:...
upon the children of his cousin Duke Alexander of Württemberg
Duke Alexander of Württemberg
Duke Alexander of Württemberg was the father of Prince Francis of Teck and the grandfather of Adolphus Cambridge, 1st Marquess of Cambridge and Queen Mary of Great Britain, wife of King George V....
(1804–85) by his morganatic marriage
Morganatic marriage
In the context of European royalty, a morganatic marriage is a marriage between people of unequal social rank, which prevents the passage of the husband's titles and privileges to the wife and any children born of the marriage...
with Claudine Rhédey von Kis-Rhéde
Claudine Rhédey von Kis-Rhéde
Countess Claudine Rhédey de Kis-Rhéde was the wife of Duke Alexander of Württemberg. Her son, Francis, Duke of Teck was the father of Mary of Teck, Queen consort to George V of the United Kingdom....
(1812–41), ennobled as countess of Hohenstein. In 1871, Prince Francis
Francis, Duke of Teck
Francis, Duke of Teck , was a member of the German nobility, and later of the British Royal Family. He was the father of Queen Mary, the wife of King George V...
, the eldest son of Duke Alexander, was created Duke of Teck
Duke of Teck
Duke of Teck was, in medieval times, a title borne by the head of a principality named Teck in the Holy Roman Empire, centered around Teck castle in Germany. That territory was held by a branch line of the Zähringen dynasty from 1187 to 1439, known historically as the first House of Teck...
. His eldest son Adolphus
Adolphus Cambridge, 1st Marquess of Cambridge
Adolphus Cambridge, 1st Marquess of Cambridge, GCB, GCVO, CMG , born Prince Adolphus of Teck and later The Duke of Teck , was a member of the British Royal Family and a younger brother of Queen Mary, the consort of King George V...
(born 1868) was the holder of the title in 1910.