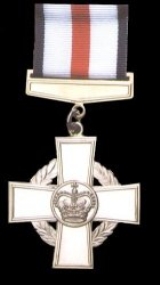 The CGC was instituted in the aftermath of the 1993 review of the honours system. As part of the drive to remove distinctions of rank in awards for bravery, the CGC replaced both the Distinguished Conduct Medal
Distinguished Conduct Medal
The Distinguished Conduct Medal was an extremely high level award for bravery. It was a second level military decoration awarded to other ranks of the British Army and formerly also to non-commissioned personnel of other Commonwealth countries.The medal was instituted in 1854, during the Crimean...
(Army) and the Conspicuous Gallantry Medal
Conspicuous Gallantry Medal
The Conspicuous Gallantry Medal was, until 1993, a military decoration awarded to personnel of the British Armed Forces and formerly also to personnel of other Commonwealth countries, below commissioned rank, for conspicuous gallantry in action against the enemy at sea...
(Air and Naval) as second level awards to Other Ranks
Other Ranks
Other Ranks in the British Army, Royal Marines and Royal Air Force are those personnel who are not commissioned officers. In the Royal Navy, these personnel are called ratings...
and ratings
Naval rating
A Naval Rating is an enlisted member of a country's Navy, subordinate to Warrant Officers and Officers hence not conferred by commission or warrant...
. The CGC also replaced the Distinguished Service Order
Distinguished Service Order
The Distinguished Service Order is a military decoration of the United Kingdom, and formerly of other parts of the British Commonwealth and Empire, awarded for meritorious or distinguished service by officers of the armed forces during wartime, typically in actual combat.Instituted on 6 September...
(DSO), in its role as an award to officers for gallantry. The DSO was retained as an award for outstanding leadership. The CGC now serves as the second level award for gallantry for all ranks across the whole armed forces.

The medal is in the shape of a cross pattée
Cross pattée
A cross pattée is a type of cross which has arms narrow at the centre, and broader at the perimeter. An early English example from the start of the age of heraldry proper A cross pattée (or "cross patty", known also as "cross formée/formy") is a type of cross which has arms narrow at the...
in silver. Arranged behind the cross, visible between the arms is a laurel wreath. On the obverse
Obverse and reverse
Obverse and its opposite, reverse, refer to the two flat faces of coins and some other two-sided objects, including paper money, flags , seals, medals, drawings, old master prints and other works of art, and printed fabrics. In this usage, obverse means the front face of the object and reverse...
of the medal, the circular medallion in the centre depicts St. Edward's crown
St. Edward's Crown
St Edward's Crown was one of the English Crown Jewels and remains one of the senior British Crown Jewels, being the official coronation crown used in the coronation of first English, then British, and finally Commonwealth realms monarchs...
. The reverse is plain which allows room for the engraving of the rank, name, and unit of its recipient. The award date is also engraved on the reverse of the medal. The medal is suspended by a white ribbon with two narrow dark blue stripes at the edge and one center stripe in crimson.

The following is a full list of recipients to date.