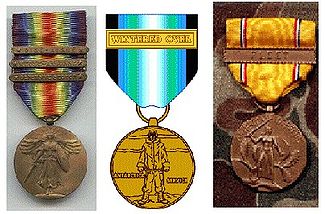 A medal bar or medal clasp is a thin metal bar attached to the ribbon of a military decoration
Military decoration
A military decoration is a decoration given to military personnel or units for heroism in battle or distinguished service. They are designed to be worn on military uniform....
, civil decoration
Civil decoration
A civil decoration is a decoration awarded to civilians for distinguished service. Military personnel might also be eligible for services of a non-military nature...
, or other medal
Medal
A medal, or medallion, is generally a circular object that has been sculpted, molded, cast, struck, stamped, or some way rendered with an insignia, portrait, or other artistic rendering. A medal may be awarded to a person or organization as a form of recognition for athletic, military, scientific,...
. It is most commonly used to indicate the campaign
Military campaign
In the military sciences, the term military campaign applies to large scale, long duration, significant military strategy plan incorporating a series of inter-related military operations or battles forming a distinct part of a larger conflict often called a war...
or operation
Military operation
Military operation is the coordinated military actions of a state in response to a developing situation. These actions are designed as a military plan to resolve the situation in the state's favor. Operations may be of combat or non-combat types, and are referred to by a code name for the purpose...
the recipient received the award for, and multiple bars on the same medal are used to indicate that the recipient has met the criteria for receiving the medal in multiple theatres
Theater (warfare)
In warfare, a theater, is defined as an area or place within which important military events occur or are progressing. The entirety of the air, land, and sea area that is or that may potentially become involved in war operations....
.

When used in conjunction with decorations for exceptional service, such as gallantry medals, the term "and bar" means that the award has been bestowed multiple times. In the example, "Group Captain Leonard Cheshire
Leonard Cheshire
Group Captain Geoffrey Leonard Cheshire, Baron Cheshire, VC, OM, DSO and Two Bars, DFC was a highly decorated British RAF pilot during the Second World War....
, VC
Victoria Cross
The Victoria Cross is the highest military decoration awarded for valour "in the face of the enemy" to members of the armed forces of various Commonwealth countries, and previous British Empire territories....
, OM
Order of Merit
The Order of Merit is a British dynastic order recognising distinguished service in the armed forces, science, art, literature, or for the promotion of culture...
, DSO and Two Bars
Distinguished Service Order
The Distinguished Service Order is a military decoration of the United Kingdom, and formerly of other parts of the British Commonwealth and Empire, awarded for meritorious or distinguished service by officers of the armed forces during wartime, typically in actual combat.Instituted on 6 September...
, DFC", "DSO and two bars" means that the Distinguished Service Order was awarded on three separate occasions. A common British convention is to indicate bars by the use of asterisks; thus, DSO** would denote a DSO and two bars.

Bars are also used on long service medals to indicate the length of service rendered.

The two terms are used because terms "bar" and "clasp" both refer to two parts of the medal; the indicator discussed in this article, and the part of the medal connected to the ribbon.

Prior to the early 19th century, medals and decorations were only awarded to ranking officers; occasions existed where medals were presented to soldiers, but these were often private efforts. One exception was the Army Gold Medal
Army Gold Medal
The Army Gold Medal , also known as the Peninsular Gold Medal, with an accompanying Gold Cross, was a British campaign medal awarded in recognition of field and general officers' successful commands in recent campaigns, predominately the Peninsular War...
issued to higher ranking participants in the Peninsular War
Peninsular War
The Peninsular War was a war between France and the allied powers of Spain, the United Kingdom, and Portugal for control of the Iberian Peninsula during the Napoleonic Wars. The war began when French and Spanish armies crossed Spain and invaded Portugal in 1807. Then, in 1808, France turned on its...
. A medal was given for service, with a clasp for each battle fought. After four clasps were earned the medal was turned in for a cross with the battle names on the arms, and additional clasps were then added. The maximum was achieved by the Duke of Wellington
Arthur Wellesley, 1st Duke of Wellington
Field Marshal Arthur Wellesley, 1st Duke of Wellington, KG, GCB, GCH, PC, FRS , was an Irish-born British soldier and statesman, and one of the leading military and political figures of the 19th century...
, with a cross and nine clasps.

Over the next 40 years, it became customary for governments to present a medal to all soldiers and officers involved in a campaign. These medals were often engraved with the names of the major battles the recipient had fought in during the campaign. The main disadvantages of this system were that new medals had to be created for each campaign or war, and that it was impossible to tell at a glance if the recipient was only a participant in the campaign overall, or if he had been involved in one or several major actions. (The first gallantry medal to be awarded to ordinary British soldiers was the Victoria Cross
Victoria Cross
The Victoria Cross is the highest military decoration awarded for valour "in the face of the enemy" to members of the armed forces of various Commonwealth countries, and previous British Empire territories....
in 1856.)

The Crimea Medal
Crimea Medal
The Crimea Medal was a campaign medal approved in 1854, for issue to officers and men of British units which fought in the Crimean War of 1854-56 against Russia....
was issued with ornate battle bars. Since then the general trend has been to have simple horizontal devices.