Most of the area west of the city is a polder
Polder
A polder is a low-lying tract of land enclosed by embankments known as dikes, that forms an artificial hydrological entity, meaning it has no connection with outside water other than through manually-operated devices...
riddled with drainage trenches. The major economical assets of the region are agriculture and farming, producing the famous butter of Diksmuide.

The 9th-century, Frankish
Franks
The Franks were a confederation of Germanic tribes first attested in the third century AD as living north and east of the Lower Rhine River. From the third to fifth centuries some Franks raided Roman territory while other Franks joined the Roman troops in Gaul. Only the Salian Franks formed a...
settlement of Dicasmutha laid at the mouth of a stream near the Yser
Yser
The Yser is a river that finds its origin in the north of France, enters Belgium and flows into the North Sea at the town of Nieuwpoort.-In France:The source of the Yser is in Buysscheure, in the Nord département of northern France...
(IJzer in Dutch
Dutch language
Dutch is a West Germanic language and the native language of the majority of the population of the Netherlands, Belgium, and Suriname, the three member states of the Dutch Language Union. Most speakers live in the European Union, where it is a first language for about 23 million and a second...
). By the 10th century, a chapel and market place were already established. The city’s charter
Charter
A charter is the grant of authority or rights, stating that the granter formally recognizes the prerogative of the recipient to exercise the rights specified...
was granted two centuries later and defensive walls built in 1270. The economy was already then based mainly on agriculture and farming, with milk products and linen driving the economy. From the 15th century to the French Revolution
French Revolution
The French Revolution , sometimes distinguished as the 'Great French Revolution' , was a period of radical social and political upheaval in France and Europe. The absolute monarchy that had ruled France for centuries collapsed in three years...
, Diksmuide was affected by the wars that confronted the Netherlands
Netherlands
The Netherlands is a constituent country of the Kingdom of the Netherlands, located mainly in North-West Europe and with several islands in the Caribbean. Mainland Netherlands borders the North Sea to the north and west, Belgium to the south, and Germany to the east, and shares maritime borders...
, France
France
The French Republic , The French Republic , The French Republic , (commonly known as France , is a unitary semi-presidential republic in Western Europe with several overseas territories and islands located on other continents and in the Indian, Pacific, and Atlantic oceans. Metropolitan France...
, Spain
Spain
Spain , officially the Kingdom of Spain languages]] under the European Charter for Regional or Minority Languages. In each of these, Spain's official name is as follows:;;;;;;), is a country and member state of the European Union located in southwestern Europe on the Iberian Peninsula...
, and Austria
Austria
Austria , officially the Republic of Austria , is a landlocked country of roughly 8.4 million people in Central Europe. It is bordered by the Czech Republic and Germany to the north, Slovakia and Hungary to the east, Slovenia and Italy to the south, and Switzerland and Liechtenstein to the...
, with a corresponding decline in activity. The 19th century was more peaceful and prosperous.


Marked by World War I

At the outset of World War I
World War I
World War I , which was predominantly called the World War or the Great War from its occurrence until 1939, and the First World War or World War I thereafter, was a major war centred in Europe that began on 28 July 1914 and lasted until 11 November 1918...
, German
Germany
Germany , officially the Federal Republic of Germany , is a federal parliamentary republic in Europe. The country consists of 16 states while the capital and largest city is Berlin. Germany covers an area of 357,021 km2 and has a largely temperate seasonal climate...
troops crossed the Belgian border near Arlon, then proceeded hurriedly towards the North Sea
North Sea
In the southwest, beyond the Straits of Dover, the North Sea becomes the English Channel connecting to the Atlantic Ocean. In the east, it connects to the Baltic Sea via the Skagerrak and Kattegat, narrow straits that separate Denmark from Norway and Sweden respectively...
to secure the French
France
The French Republic , The French Republic , The French Republic , (commonly known as France , is a unitary semi-presidential republic in Western Europe with several overseas territories and islands located on other continents and in the Indian, Pacific, and Atlantic oceans. Metropolitan France...
ports of Calais
Calais
Calais is a town in Northern France in the department of Pas-de-Calais, of which it is a sub-prefecture. Although Calais is by far the largest city in Pas-de-Calais, the department's capital is its third-largest city of Arras....
and Dunkirk. The Battle of the IJzer started in October 1914. Thanks to the water the Belgians could stop the Germans. At the end of October the Belgians had opened the gates of the Yser river and flooded the area. As a result, the river became a front line throughout the First World War. The city was first attacked on October 16, 1914 and defended by Belgian and French troops, which marked the beginning of the Battle of the Yser
Battle of the Yser
The Battle of the Yser secured part of the coastline of Belgium for the allies in the "Race to the Sea" after the first three months of World War I.-Strategic Context:As part of the execution of the Schlieffen Plan, Belgium had been invaded by Germany...
. Colonel Alphonse Jacques de Dixmude
Jules Marie Alphonse Jacques de Dixmude
Jules Marie Alphonse Jacques de Dixmude was a Belgian general.He founded Albertville in Congo in 1894. His role in The Congo Free State was questioned in the Casement report....
led the troops that prevent Diksmuide from being taken by the German Army. By the time the fighting ended, the town had been reduced to rubble. It was, however, completely rebuilt in the 1920s. 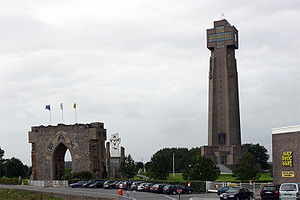 The Pax is a four-star hotel, the Polderbloem on the main square a 2 star one.

Ellesmere
Ellesmere, Shropshire
Ellesmere is a small market town near Oswestry in north Shropshire, England, notable for its proximity to a number of prominent lakes, the Meres.-History:...
, United Kingdom Ploemeur
Ploemeur
Ploemeur is a commune in the Morbihan department in the region of Brittany in north-western France.The inhabitants are called the Ploemeurois.-Breton language:...
, France Rottach-Egern
Rottach-Egern
Rottach-Egern is a municipality and town located at Lake Tegernsee in the district of Miesbach in Upper Bavaria, Germany....
, Germany Finnentrop
Finnentrop
Finnentrop is a community in Olpe district in North Rhine-Westphalia, Germany.- Geography :Finnentrop lies near the forks of the rivers Bigge and Lenne in the Sauerland and is divided into the following constituent communities:- History :...
, Germany