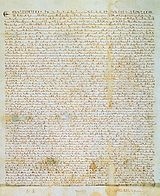 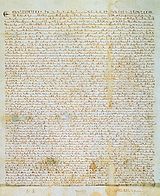 A charter is the grant of authority
Authority
The word Authority is derived mainly from the Latin word auctoritas, meaning invention, advice, opinion, influence, or command. In English, the word 'authority' can be used to mean power given by the state or by academic knowledge of an area .-Authority in Philosophy:In...
or rights
Rights
Rights are legal, social, or ethical principles of freedom or entitlement; that is, rights are the fundamental normative rules about what is allowed of people or owed to people, according to some legal system, social convention, or ethical theory...
, stating that the granter formally recognizes the prerogative of the recipient to exercise the rights specified. It is implicit that the granter retains superiority (or sovereignty
Sovereignty
Sovereignty is the quality of having supreme, independent authority over a geographic area, such as a territory. It can be found in a power to rule and make law that rests on a political fact for which no purely legal explanation can be provided...
), and that the recipient admits a limited (or inferior) status within the relationship, and it is within that sense that charters were historically granted, and that sense is retained in modern usage of the term. Also, charter can simply be a document giving royal permission to start a colony.

The word entered the English language
English language
English is a West Germanic language that arose in the Anglo-Saxon kingdoms of England and spread into what was to become south-east Scotland under the influence of the Anglian medieval kingdom of Northumbria...
from the Old French
Old French
Old French was the Romance dialect continuum spoken in territories that span roughly the northern half of modern France and parts of modern Belgium and Switzerland from the 9th century to the 14th century...
charte (ultimately from the Latin
Latin
Latin is an Italic language originally spoken in Latium and Ancient Rome. It, along with most European languages, is a descendant of the ancient Proto-Indo-European language. Although it is considered a dead language, a number of scholars and members of the Christian clergy speak it fluently, and...
word for "paper"), but the concept is universal and transcends language. It has come to be synonymous with the document that lays out the granting of rights or privileges.

The term is used for a special case (or as an exception) to an institutional charter. A charter school
Charter school
Charter schools are primary or secondary schools that receive public money but are not subject to some of the rules, regulations, and statutes that apply to other public schools in exchange for some type of accountability for producing certain results, which are set forth in each school's charter...
, for example, is one that has different rules, regulations, and statutes from a state school.

Charter is sometimes used as a synonym for 'tool' or 'lease', as in the 'charter' of a bus or boat by an organization, intended for a similar group destination.

A charter member of an organization is an original member; that is, one who became a member when the organization received its charter.

Anglo-Saxon Charters are documents from the early medieval period
History of Anglo-Saxon England
Anglo-Saxon England refers to the period of the history of that part of Britain, that became known as England, lasting from the end of Roman occupation and establishment of Anglo-Saxon kingdoms in the 5th century until the Norman conquest of England in 1066 by William the Conqueror...
in Britain
Great Britain
Great Britain or Britain is an island situated to the northwest of Continental Europe. It is the ninth largest island in the world, and the largest European island, as well as the largest of the British Isles...
which typically make a grant of land
Real estate
In general use, esp. North American, 'real estate' is taken to mean "Property consisting of land and the buildings on it, along with its natural resources such as crops, minerals, or water; immovable property of this nature; an interest vested in this; an item of real property; buildings or...
or record a privilege. They are usually written on parchment
Parchment
Parchment is a thin material made from calfskin, sheepskin or goatskin, often split. Its most common use was as a material for writing on, for documents, notes, or the pages of a book, codex or manuscript. It is distinct from leather in that parchment is limed but not tanned; therefore, it is very...
, in Latin
Latin
Latin is an Italic language originally spoken in Latium and Ancient Rome. It, along with most European languages, is a descendant of the ancient Proto-Indo-European language. Although it is considered a dead language, a number of scholars and members of the Christian clergy speak it fluently, and...
but often with sections in the vernacular, describing the bounds of estates, which often correspond closely to modern parish boundaries. The earliest surviving charters were drawn up in the 670s; the oldest surviving charters granted land to the Church
Roman Catholic Church
The Catholic Church, also known as the Roman Catholic Church, is the world's largest Christian church, with over a billion members. Led by the Pope, it defines its mission as spreading the gospel of Jesus Christ, administering the sacraments and exercising charity...
, but from the 8th century surviving charters were increasingly used to grant land to lay people.

The British Empire
British Empire
The British Empire comprised the dominions, colonies, protectorates, mandates and other territories ruled or administered by the United Kingdom. It originated with the overseas colonies and trading posts established by England in the late 16th and early 17th centuries. At its height, it was the...
used three main types of colonies as it sought to expand its territory to distant parts of the earth. These three types were royal colonies, proprietary colonies, and corporate colonies. A charter colony by definition is a "colony…chartered to an individual, trading company, etc., by the British crown." Although charter colonies were not the most prevalent of the three types of colonies in the British Empire, they were by no means insignificant.

A municipal corporation is the legal term for a local governing body
Local government
Local government refers collectively to administrative authorities over areas that are smaller than a state.The term is used to contrast with offices at nation-state level, which are referred to as the central government, national government, or federal government...
, including (but not necessarily limited to) cities
City
A city is a relatively large and permanent settlement. Although there is no agreement on how a city is distinguished from a town within general English language meanings, many cities have a particular administrative, legal, or historical status based on local law.For example, in the U.S...
, counties
County
A county is a jurisdiction of local government in certain modern nations. Historically in mainland Europe, the original French term, comté, and its equivalents in other languages denoted a jurisdiction under the sovereignty of a count A county is a jurisdiction of local government in certain...
, town
Town
A town is a human settlement larger than a village but smaller than a city. The size a settlement must be in order to be called a "town" varies considerably in different parts of the world, so that, for example, many American "small towns" seem to British people to be no more than villages, while...
s, township
Township
The word township is used to refer to different kinds of settlements in different countries. Township is generally associated with an urban area. However there are many exceptions to this rule. In Australia, the United States, and Canada, they may be settlements too small to be considered urban...
s, charter township
Charter township
A charter township is a form of local government in the U.S. state of Michigan. Townships in Michigan are organized governments. A charter township is a township that has been granted a charter, which allows it certain rights and responsibilities of home rule that are generally intermediary in...
s, village
Village
A village is a clustered human settlement or community, larger than a hamlet with the population ranging from a few hundred to a few thousand , Though often located in rural areas, the term urban village is also applied to certain urban neighbourhoods, such as the West Village in Manhattan, New...
s, and borough
Borough
A borough is an administrative division in various countries. In principle, the term borough designates a self-governing township although, in practice, official use of the term varies widely....
s. Municipal incorporation occurs when such municipalities
Municipality
A municipality is essentially an urban administrative division having corporate status and usually powers of self-government. It can also be used to mean the governing body of a municipality. A municipality is a general-purpose administrative subdivision, as opposed to a special-purpose district...
become self-governing entities under the laws of the state or province in which they are located. Often, this event is marked by the award or declaration of a municipal charter.

In project management
Project management
Project management is the discipline of planning, organizing, securing, and managing resources to achieve specific goals. A project is a temporary endeavor with a defined beginning and end , undertaken to meet unique goals and objectives, typically to bring about beneficial change or added value...
, a project charter or project definition (sometimes called the terms of reference
Terms of reference
Terms of reference describe the purpose and structure of a project, committee, meeting, negotiation, or any similar collection of people who have agreed to work together to accomplish a shared goal. The terms of reference of a project are often referred to as the project charter.- Terms of...
) is a statement of the scope, objectives and participants in a project. It provides a preliminary delineation of roles and responsibilities, outlines the project objectives, identifies the main stakeholders, and defines the authority of the project manager. It serves as a reference of authority for the future of the project.

In medieval Europe, royal charters were used to create cities (i.e., localities with recognised legal rights and privileges). The date that such a charter was granted is considered to be when a city was "founded", regardless of when the locality originally began to be settled.