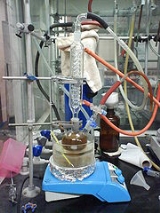 Commonly encountered pre-packaged desiccants are solids, and work through absorption or adsorption
Adsorption
Adsorption is the adhesion of atoms, ions, biomolecules or molecules of gas, liquid, or dissolved solids to a surface. This process creates a film of the adsorbate on the surface of the adsorbent. It differs from absorption, in which a fluid permeates or is dissolved by a liquid or solid...
of water
Water
Water is a chemical substance with the chemical formula H2O. A water molecule contains one oxygen and two hydrogen atoms connected by covalent bonds. Water is a liquid at ambient conditions, but it often co-exists on Earth with its solid state, ice, and gaseous state . Water also exists in a...
, or a combination of the two. Desiccants for specialized purposes may be in forms other than solid, and may work through other principles, such as chemical bonding of water molecules.

Pre-packaged desiccant is most commonly used to remove excessive humidity
Humidity
Humidity is a term for the amount of water vapor in the air, and can refer to any one of several measurements of humidity. Formally, humid air is not "moist air" but a mixture of water vapor and other constituents of air, and humidity is defined in terms of the water content of this mixture,...
that would normally degrade or even destroy products sensitive to moisture. Some commonly used desiccants are: silica gel
Silica gel
Silica gel is a granular, vitreous, porous form of silica made synthetically from sodium silicate. Despite its name, silica gel is a solid. It is a naturally occurring mineral that is purified and processed into either granular or beaded form...
, activated charcoal, calcium sulfate
Calcium sulfate
Calcium sulfate is a common laboratory and industrial chemical. In the form of γ-anhydrite , it is used as a desiccant. It is also used as a coagulant in products like tofu. In the natural state, unrefined calcium sulfate is a translucent, crystalline white rock...
, calcium chloride
Calcium chloride
Calcium chloride, CaCl2, is a salt of calcium and chlorine. It behaves as a typical ionic halide, and is solid at room temperature. Common applications include brine for refrigeration plants, ice and dust control on roads, and desiccation...
, montmorillonite clay, and molecular sieve
Molecular sieve
A molecular sieve is a material containing tiny pores of a precise and uniform size that is used as an adsorbent for gases and liquids.Molecules small enough to pass through the pores are adsorbed while larger molecules are not. It is different from a common filter in that it operates on a...
s. Silica gel is often used in musical instrument cases.

Rice
Rice
Rice is the seed of the monocot plants Oryza sativa or Oryza glaberrima . As a cereal grain, it is the most important staple food for a large part of the world's human population, especially in East Asia, Southeast Asia, South Asia, the Middle East, and the West Indies...
is a common "low-tech" alternative frequently used, for example, in salt-shakers to maintain granularity of table salt for effective pouring or shaking. Rice, however, is not a good general purpose desiccant since, unless immersed in an organism-hostile environment like pure salt, over time may be eaten by creatures that might in turn contaminate the product that is being preserved. Salt itself is another effective desiccant, used for millennia in preparation of dried food and also to mummify
Mummy
A mummy is a body, human or animal, whose skin and organs have been preserved by either intentional or incidental exposure to chemicals, extreme coldness , very low humidity, or lack of air when bodies are submerged in bogs, so that the recovered body will not decay further if kept in cool and dry...
corpses.

A specific usage of a desiccant would be in insulated windows
Insulated glazing
Insulated glazing also known as double glazing are double or triple glass window panes separated by an air or other gas filled space to reduce heat transfer across a part of the building envelope....
where it is placed inside the spacer between the air space and window edge. This prevents moisture condensation between the panes.

A desiccant may be chosen for a particular task based not only on its effectiveness at drying, but also perhaps for any natural antibiotic
Antibiotic
An antibacterial is a compound or substance that kills or slows down the growth of bacteria.The term is often used synonymously with the term antibiotic; today, however, with increased knowledge of the causative agents of various infectious diseases, antibiotic has come to denote a broader range of...
, fungicidal
Fungicide
Fungicides are chemical compounds or biological organisms used to kill or inhibit fungi or fungal spores. Fungi can cause serious damage in agriculture, resulting in critical losses of yield, quality and profit. Fungicides are used both in agriculture and to fight fungal infections in animals...
, pesticidal
Pesticide
Pesticides are substances or mixture of substances intended for preventing, destroying, repelling or mitigating any pest.A pesticide may be a chemical unicycle, biological agent , antimicrobial, disinfectant or device used against any pest...
, or virucidal effect, or for a lack of harmful effect on humans. For instance, table salt has a natural antibiotic and anti-fungal effect and is not harmful to humans when consumed in moderate quantities, and is thus commonly used as a drying agent in the preparation of dried foods.

Because of their common use in preservation, it is usually desirable for a desiccant to be substantially chemically stable or chemically inert
Inert
-Chemistry:In chemistry, the term inert is used to describe a substance that is not chemically reactive.The noble gases were previously known as inert gases because of their perceived lack of participation in any chemical reactions...
, and a number of useful desiccants with this property have been identified and are in common use, such as silica gel, chalk and clay-based desiccants.

One measure of desiccant efficiency is the ratio (or percentage
Percentage
In mathematics, a percentage is a way of expressing a number as a fraction of 100 . It is often denoted using the percent sign, “%”, or the abbreviation “pct”. For example, 45% is equal to 45/100, or 0.45.Percentages are used to express how large/small one quantity is, relative to another quantity...
) of water storable in the desiccant, relative to the mass
Mass
Mass can be defined as a quantitive measure of the resistance an object has to change in its velocity.In physics, mass commonly refers to any of the following three properties of matter, which have been shown experimentally to be equivalent:...
of desiccant.

The performance of any desiccant varies with temperature
Temperature
Temperature is a physical property of matter that quantitatively expresses the common notions of hot and cold. Objects of low temperature are cold, while various degrees of higher temperatures are referred to as warm or hot...
and both relative humidity
Relative humidity
Relative humidity is a term used to describe the amount of water vapor in a mixture of air and water vapor. It is defined as the partial pressure of water vapor in the air-water mixture, given as a percentage of the saturated vapor pressure under those conditions...
and absolute humidity. To some extent, desiccant performance can be precisely described, but most commonly, the final choice of which desiccant best suits a given situation, how much of it to use, and in what form, is made based on testing and practical experience.

Often some sort of humidity indicator
Humidity indicator
A humidity indicator is a moisture-sensitive chemical that changes color when the indicated relative humidity is exceeded.Some chemicals are:* cobalt chloride * copper chloride...
is included in the desiccant to show, by color changes, the degree of water-saturation of the desiccant. One commonly used indicator is cobalt chloride
Cobalt(II) chloride
Cobalt chloride is an inorganic compound of cobalt and chloride, with the formula CoCl2. It is usually supplied as the hexahydrate CoCl2·6H2O, which is one of the most commonly used cobalt compounds in the laboratory. The hexahydrate is deep purple in color, whereas the anhydrous form is sky blue...
(CoCl2). Anhydrous
Anhydrous
As a general term, a substance is said to be anhydrous if it contains no water. The way of achieving the anhydrous form differs from one substance to another...
cobalt chloride is blue. When it bonds with two water molecules, (CoCl2•2H2O), it turns purple. Further hydration results in the pink hexaaquacobalt(II) chloride complex [Co(H2O)6]Cl2. 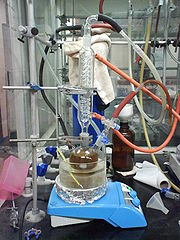 Often, the desiccant will react with moisture to form an insoluble solid that can be removed by filtration. When a very pure solvent is required, a distillation
Distillation
Distillation is a method of separating mixtures based on differences in volatilities of components in a boiling liquid mixture. Distillation is a unit operation, or a physical separation process, and not a chemical reaction....
still is used to remove moisture and other impurities simultaneously.