A desiccator
Desiccator
thumb|right|A desiccator and a vacuum desiccator - note the stopcock which allows a vacuum to be applied. The blue [[silica gel]] in the space below the platform is used as the [[desiccant]]....
is a heavy glass
Glass
Glass is an amorphous solid material. Glasses are typically brittle and optically transparent.The most familiar type of glass, used for centuries in windows and drinking vessels, is soda-lime glass, composed of about 75% silica plus Na2O, CaO, and several minor additives...
or plastic
Plastic
A plastic material is any of a wide range of synthetic or semi-synthetic organic solids used in the manufacture of industrial products. Plastics are typically polymers of high molecular mass, and may contain other substances to improve performance and/or reduce production costs...
container used in practical chemistry
Chemistry
Chemistry is the science of matter, especially its chemical reactions, but also its composition, structure and properties. Chemistry is concerned with atoms and their interactions with other atoms, and particularly with the properties of chemical bonds....
for making or keeping small amounts of material very dry. The material is placed on a shelf, and a drying agent or desiccant, such as dry silica gel
Silica gel
Silica gel is a granular, vitreous, porous form of silica made synthetically from sodium silicate. Despite its name, silica gel is a solid. It is a naturally occurring mineral that is purified and processed into either granular or beaded form...
or anhydrous sodium hydroxide, is placed below the shelf.

Often some sort of humidity
Humidity
Humidity is a term for the amount of water vapor in the air, and can refer to any one of several measurements of humidity. Formally, humid air is not "moist air" but a mixture of water vapor and other constituents of air, and humidity is defined in terms of the water content of this mixture,...
indicator is included in the desiccator to show, by color changes, the level of humidity. These indicators are in the form of indicator plugs or indicator cards. The active chemical is cobalt chloride
Cobalt(II) chloride
Cobalt chloride is an inorganic compound of cobalt and chloride, with the formula CoCl2. It is usually supplied as the hexahydrate CoCl2·6H2O, which is one of the most commonly used cobalt compounds in the laboratory. The hexahydrate is deep purple in color, whereas the anhydrous form is sky blue...
(CoCl2). Anhydrous
Anhydrous
As a general term, a substance is said to be anhydrous if it contains no water. The way of achieving the anhydrous form differs from one substance to another...
cobalt chloride is blue. When it bonds with two water molecules, (CoCl2•2H2O), it turns purple. Further hydration results in the pink hexaaquacobalt(II) chloride complex [Co(H2O)6]2+.

In biology
Biology
Biology is a natural science concerned with the study of life and living organisms, including their structure, function, growth, origin, evolution, distribution, and taxonomy. Biology is a vast subject containing many subdivisions, topics, and disciplines...
and ecology
Ecology
Ecology is the scientific study of the relations that living organisms have with respect to each other and their natural environment. Variables of interest to ecologists include the composition, distribution, amount , number, and changing states of organisms within and among ecosystems...
, desiccation refers to the drying out of a living organism, such as when aquatic animals are taken out of water, or when plants are exposed to sunlight or drought. Ecologists frequently study and assess various organisms' susceptibility to desiccation.

In broadcast engineering
Broadcast engineering
Broadcast engineering is the field of electrical engineering, and now to some extent computer engineering and information technology, which deals with radio and television broadcasting...
, a desiccator may be used to pressurize the feedline of a high-power transmitter. Because it carries very high electrical power
Electric power
Electric power is the rate at which electric energy is transferred by an electric circuit. The SI unit of power is the watt.-Circuits:Electric power, like mechanical power, is represented by the letter P in electrical equations...
levels from the transmitter
Transmitter
In electronics and telecommunications a transmitter or radio transmitter is an electronic device which, with the aid of an antenna, produces radio waves. The transmitter itself generates a radio frequency alternating current, which is applied to the antenna. When excited by this alternating...
to the antenna
Antenna (radio)
An antenna is an electrical device which converts electric currents into radio waves, and vice versa. It is usually used with a radio transmitter or radio receiver...
, the feedline must have a good dielectric
Dielectric
A dielectric is an electrical insulator that can be polarized by an applied electric field. When a dielectric is placed in an electric field, electric charges do not flow through the material, as in a conductor, but only slightly shift from their average equilibrium positions causing dielectric...
. Because it must also be lightweight so as not to overload the radio tower
Radio masts and towers
Radio masts and towers are, typically, tall structures designed to support antennas for telecommunications and broadcasting, including television. They are among the tallest man-made structures...
, air is often used as the dielectric. Since moisture
Moisture
Humidity is the amount of moisture the air can hold before it rains. Moisture refers to the presence of a liquid, especially water, often in trace amounts...
can condense in these lines, desiccated air or nitrogen
Nitrogen
Nitrogen is a chemical element that has the symbol N, atomic number of 7 and atomic mass 14.00674 u. Elemental nitrogen is a colorless, odorless, tasteless, and mostly inert diatomic gas at standard conditions, constituting 78.08% by volume of Earth's atmosphere...
gas
Gas
Gas is one of the three classical states of matter . Near absolute zero, a substance exists as a solid. As heat is added to this substance it melts into a liquid at its melting point , boils into a gas at its boiling point, and if heated high enough would enter a plasma state in which the electrons...
is pumped in. This pressure
Pressure
Pressure is the force per unit area applied in a direction perpendicular to the surface of an object. Gauge pressure is the pressure relative to the local atmospheric or ambient pressure.- Definition :...
also keeps water
Water
Water is a chemical substance with the chemical formula H2O. A water molecule contains one oxygen and two hydrogen atoms connected by covalent bonds. Water is a liquid at ambient conditions, but it often co-exists on Earth with its solid state, ice, and gaseous state . Water also exists in a...
or other damp
Moisture
Humidity is the amount of moisture the air can hold before it rains. Moisture refers to the presence of a liquid, especially water, often in trace amounts...
ness from coming in the line at any point along its length. 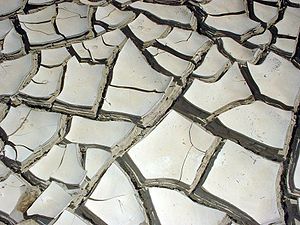