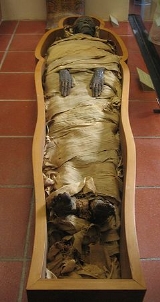 Overview
A mummy is a body, human or animal, whose skin
Human skin
The human skin is the outer covering of the body. In humans, it is the largest organ of the integumentary system. The skin has multiple layers of ectodermal tissue and guards the underlying muscles, bones, ligaments and internal organs. Human skin is similar to that of most other mammals,...
and organs have been preserved by either intentional or incidental exposure to chemicals, extreme coldness (ice mummies), very low humidity
Humidity
Humidity is a term for the amount of water vapor in the air, and can refer to any one of several measurements of humidity. Formally, humid air is not "moist air" but a mixture of water vapor and other constituents of air, and humidity is defined in terms of the water content of this mixture,...
, or lack of air when bodies are submerged in bog
Bog
A bog, quagmire or mire is a wetland that accumulates acidic peat, a deposit of dead plant material—often mosses or, in Arctic climates, lichens....
s, so that the recovered body will not decay further if kept in cool and dry conditions. Some authorities restrict the use of the term to bodies deliberately embalmed with chemicals, but the use of the word to cover accidentally desiccated bodies goes back at least to the 1730s.

Mummies of humans and other animals have been found throughout the world, both as a result of natural preservation through unusual conditions, and as cultural artifacts to preserve the dead.

Hey there! How are desert mummies formed? WHAT ARE THEY??!! What is needed to make them? Thx! Kassie
More

Is it only humans that are mummified or animals also?

What circumstances have led to mummies bieng preserved?

How old is the oldest mummy?

Would you or someone you know donate their body to science after they die... to be mummified? Documentary in progress.

Are mummies only naturally preserved or are they intentionally opreserved?

What is the key to mummification?
More
x