The Descent from the Cross , or Deposition of Christ, is the scene, as depicted in art, from the Gospels' accounts of Joseph of Arimathea
Joseph of Arimathea
Joseph of Arimathea was, according to the Gospels, the man who donated his own prepared tomb for the burial of Jesus after Jesus' Crucifixion. He is mentioned in all four Gospels.-Gospel references:...
and Nicodemus
Nicodemus
Saint Nicodemus was a Pharisee and a member of the Sanhedrin, who, according to the Gospel of John, showed favour to Jesus...
taking Christ down from the cross after his crucifixion
Crucifixion of Jesus
The crucifixion of Jesus and his ensuing death is an event that occurred during the 1st century AD. Jesus, who Christians believe is the Son of God as well as the Messiah, was arrested, tried, and sentenced by Pontius Pilate to be scourged, and finally executed on a cross...
. In Byzantine art
Byzantine art
Byzantine art is the term commonly used to describe the artistic products of the Byzantine Empire from about the 5th century until the Fall of Constantinople in 1453....
the topic became popular in the 9th century, and in the West from the 10th century. The Descent from the Cross is the 13th Station of the Cross.

Other figures not mentioned in the Gospels who are often included in depictions of this subject include St. John the Evangelist, who is sometimes depicted supporting a fainting Mary (as in the work below by Rogier van der Weyden), and Mary Magdalene
Mary Magdalene
Mary Magdalene was one of Jesus' most celebrated disciples, and the most important woman disciple in the movement of Jesus. Jesus cleansed her of "seven demons", conventionally interpreted as referring to complex illnesses...
. The Gospels mention an undefined number of women as watching the crucifixion, including the Three Marys, (Mary Salome
Salome (disciple)
Salome , sometimes venerated as Mary Salome, was a follower of Jesus who appears briefly in the canonical gospels and in more detail in apocryphal writings...
being mentioned in ), and also that the Virgin Mary and Mary Magdalene saw the burial . These and further women and unnamed male helpers are often shown.


Development of the image

Even in early depictions the details and posing of the composition, and especially the position of Christ's body, are varied. The scene was usually included in medieval cycles of the Life or the Passion of Christ, between the Crucifixion
Crucifixion
Crucifixion is an ancient method of painful execution in which the condemned person is tied or nailed to a large wooden cross and left to hang until dead...
and the Entombment of Christ. The Lamentation of Christ
Lamentation of Christ
350px|thumb|Lamentation by [[Giotto di Bondone]] in the [[Scrovegni Chapel]]The Lamentation of Christ is a very common subject in Christian art from the High Middle Ages to the Baroque. After Jesus was crucified, his body was removed from the cross and his friends and family mourned over his body...
, or Pietà
Pietà
The Pietà is a subject in Christian art depicting the Virgin Mary cradling the dead body of Jesus, most often found in sculpture. As such, it is a particular form of the Lamentation of Christ, a scene from the Passion of Christ found in cycles of the Life of Christ...
, showing the body of Christ held by Mary, may intervene between these two, and is common as an individual image, especially in sculpture
Sculpture
Sculpture is three-dimensional artwork created by shaping or combining hard materials—typically stone such as marble—or metal, glass, or wood. Softer materials can also be used, such as clay, textiles, plastics, polymers and softer metals...
. The Bearing of the body, showing Christ's body being carried to his tomb, and the Anointing of Christ's body, showing the body laid flat on the top of the tomb or a similarly-shaped "anointing-stone" are other scenes that may be shown. This last is especially important in Orthodox art, where it is shown on the Epitaphios
Epitaphios
Epitaphios may refer to:* Funeral oration or epitaphios logos* Epitaphios or epitaphion, a cloth icon used during Holy Week in churches that follow the Byzantine rite...
. 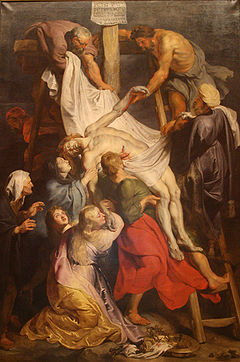