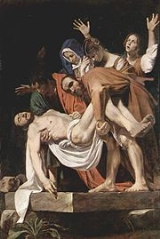 While there is much in this representation that was revolutionary for Caravaggio's time, it is not clear that the highly naturalistic reconstruction of a gospel event in this painting would have been antithetical to the vividly faithful Oratorians, who sought to relive experiences through prayer.