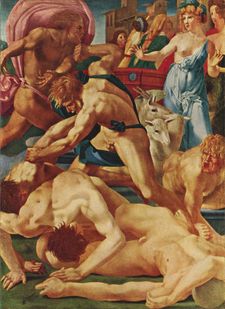 Giovanni Battista di Jacopo (1494–1540), known as Rosso Fiorentino (meaning "the Red Florentine" in Italian), or Il Rosso, was an Italian
Italy
Italy , officially the Italian Republic languages]] under the European Charter for Regional or Minority Languages. In each of these, Italy's official name is as follows:;;;;;;;;), is a unitary parliamentary republic in South-Central Europe. To the north it borders France, Switzerland, Austria and...
Mannerist
Mannerism
Mannerism is a period of European art that emerged from the later years of the Italian High Renaissance around 1520. It lasted until about 1580 in Italy, when a more Baroque style began to replace it, but Northern Mannerism continued into the early 17th century throughout much of Europe...
painter
Painting
Painting is the practice of applying paint, pigment, color or other medium to a surface . The application of the medium is commonly applied to the base with a brush but other objects can be used. In art, the term painting describes both the act and the result of the action. However, painting is...
, in oil and fresco
Fresco
Fresco is any of several related mural painting types, executed on plaster on walls or ceilings. The word fresco comes from the Greek word affresca which derives from the Latin word for "fresh". Frescoes first developed in the ancient world and continued to be popular through the Renaissance...
, belonging to the Florentine school
Florentine School
The Florentine School refers to artists in, from or influenced by the naturalistic style developed in the 14th century, largely through the efforts of Giotto di Bondone, and in the 15th century the leading school of the world...
.

Born in Florence
Florence
Florence is the capital city of the Italian region of Tuscany and of the province of Florence. It is the most populous city in Tuscany, with approximately 370,000 inhabitants, expanding to over 1.5 million in the metropolitan area....
Italy with the red hair that gave him his nickname, Rosso first trained in the studio of Andrea del Sarto
Andrea del Sarto
Andrea del Sarto was an Italian painter from Florence, whose career flourished during the High Renaissance and early Mannerism. Though highly regarded during his lifetime as an artist senza errori , his renown was eclipsed after his death by that of his contemporaries, Leonardo da Vinci,...
alongside his contemporary, Pontormo
Pontormo
Jacopo Carucci , usually known as Jacopo da Pontormo, Jacopo Pontormo or simply Pontormo, was an Italian Mannerist painter and portraitist from the Florentine school. His work represents a profound stylistic shift from the calm perspectival regularity that characterized the art of the Florentine...
. In late 1523, Rosso moved to Rome, where he was exposed to the works of Michelangelo
Michelangelo
Michelangelo di Lodovico Buonarroti Simoni , commonly known as Michelangelo, was an Italian Renaissance painter, sculptor, architect, poet, and engineer who exerted an unparalleled influence on the development of Western art...
, Raphael
Raphael
Raffaello Sanzio da Urbino , better known simply as Raphael, was an Italian painter and architect of the High Renaissance. His work is admired for its clarity of form and ease of composition and for its visual achievement of the Neoplatonic ideal of human grandeur...
, and other Renaissance artists, resulting in the realignment of his artistic style.

Rosso's reputation, along those of other stylized late Renaissance Florentines, was long out of favour in comparison to other more naturalistic and graceful contemporaries, but has revived considerably in recent decades. That his masterpiece is in a small city, away from the tourist track, was a factor in this, especially before the arrival of photography. His poses are certainly contorted, and his figures often appear haggard and thin, but his work has considerable power.

His masterpiece is generally considered to be the Deposition or Descent from the Cross
Descent from the Cross
The Descent from the Cross , or Deposition of Christ, is the scene, as depicted in art, from the Gospels' accounts of Joseph of Arimathea and Nicodemus taking Christ down from the cross after his crucifixion . In Byzantine art the topic became popular in the 9th century, and in the West from the...
altarpiece
Altarpiece
An altarpiece is a picture or relief representing a religious subject and suspended in a frame behind the altar of a church. The altarpiece is often made up of two or more separate panels created using a technique known as panel painting. It is then called a diptych, triptych or polyptych for two,...
in the Pinacoteca Comunale di Volterra
Volterra
Volterra, known to the ancient Etruscans as Velathri, to the Romans as Volaterrae, is a town and comune in the Tuscany region of Italy.-History:...
(initially painted for the Duomo). In contrast to the frozen grief of other depositions, this one appears as a hurried and complicated operation, while the figures below have simple and forceful expressions of quiet grief, with powerful expressions hinted at by hidden faces. The sky is somber. The three ladders and those carrying down Christ appear precarious. Christ himself is sallow. Contrast this frenetic, windswept scene with the equally complex, but more restrained composition on the same theme by the near contemporary Florentine Mannerist Pontormo
Pontormo
Jacopo Carucci , usually known as Jacopo da Pontormo, Jacopo Pontormo or simply Pontormo, was an Italian Mannerist painter and portraitist from the Florentine school. His work represents a profound stylistic shift from the calm perspectival regularity that characterized the art of the Florentine...
.