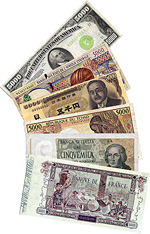 Denomination is a proper description of a currency
Currency
In economics, currency refers to a generally accepted medium of exchange. These are usually the coins and banknotes of a particular government, which comprise the physical aspects of a nation's money supply...
amount, usually for coin
Coin
A coin is a piece of hard material that is standardized in weight, is produced in large quantities in order to facilitate trade, and primarily can be used as a legal tender token for commerce in the designated country, region, or territory....
s or banknote
Banknote
A banknote is a kind of negotiable instrument, a promissory note made by a bank payable to the bearer on demand, used as money, and in many jurisdictions is legal tender. In addition to coins, banknotes make up the cash or bearer forms of all modern fiat money...
s. Denominations may also be used with other means of payment like gift card
Scrip
Scrip is an American term for any substitute for currency which is not legal tender and is often a form of credit. Scrips were created as company payment of employees and also as a means of payment in times where regular money is unavailable, such as remote coal towns, military bases, ships on long...
s. See also Redenomination
Redenomination
Redenomination is the process of changing the face value of banknotes or coins used in circulating currency.When redenomination occurs, financial data that spans the change must be correctly accounted for. For example, the GDP is properly documented....
.

In a currency, there is usually a main unit (base), and a subunit that is a fraction
Fraction (mathematics)
A fraction represents a part of a whole or, more generally, any number of equal parts. When spoken in everyday English, we specify how many parts of a certain size there are, for example, one-half, five-eighths and three-quarters.A common or "vulgar" fraction, such as 1/2, 5/8, 3/4, etc., consists...
of the main unit. In some countries, there are multiple levels of subunits. In the former Ottoman Empire
Ottoman Empire
The Ottoman EmpireIt was usually referred to as the "Ottoman Empire", the "Turkish Empire", the "Ottoman Caliphate" or more commonly "Turkey" by its contemporaries...
, 1 lira = 100 kuruş
Kurus
Kuruş is a Turkish currency subunit. Since 2005, one new Turkish lira is equal to 100 kuruş. The kuruş was also the standard unit of currency in the Ottoman Empire until 1844, and from that date until the late 1970s was a subdivision of the former lira. It was subdivided into 40 para , each of...
= 4000 para = 12000 akçe
Akçe
thumb|250px|AkçeA silver coin, the akçe was the chief monetary unit of the Ottoman Empire. The word "akçe" is derived from the Greek "" , the name of a Byzantine silver or billon coin, current in the region that eventually became the Ottoman Empire. The akçe is hence often called asper in English...
. Today, only a few places have more than one subunit, notably Chinese
Chinese language
The Chinese language is a language or language family consisting of varieties which are mutually intelligible to varying degrees. Originally the indigenous languages spoken by the Han Chinese in China, it forms one of the branches of Sino-Tibetan family of languages...
speaking regions: the mainland China
Mainland China
Mainland China, the Chinese mainland or simply the mainland, is a geopolitical term that refers to the area under the jurisdiction of the People's Republic of China . According to the Taipei-based Mainland Affairs Council, the term excludes the PRC Special Administrative Regions of Hong Kong and...
(renminbi
Renminbi
The Renminbi is the official currency of the People's Republic of China . Renminbi is legal tender in mainland China, but not in Hong Kong or Macau. It is issued by the People's Bank of China, the monetary authority of the PRC...
), the Hong Kong
Hong Kong
Hong Kong is one of two Special Administrative Regions of the People's Republic of China , the other being Macau. A city-state situated on China's south coast and enclosed by the Pearl River Delta and South China Sea, it is renowned for its expansive skyline and deep natural harbour...
(dollar
Hong Kong dollar
The Hong Kong dollar is the currency of the jurisdiction. It is the eighth most traded currency in the world. In English, it is normally abbreviated with the dollar sign $, or alternatively HK$ to distinguish it from other dollar-denominated currencies...
), and Republic of China
Republic of China
The Republic of China , commonly known as Taiwan , is a unitary sovereign state located in East Asia. Originally based in mainland China, the Republic of China currently governs the island of Taiwan , which forms over 99% of its current territory, as well as Penghu, Kinmen, Matsu and other minor...
's (New Taiwan dollar
New Taiwan dollar
The New Taiwan dollar , or simply Taiwan dollar, is the official currency of the Taiwan Area of the Republic of China since 1949, when it replaced the Old Taiwan dollar...
). In addition, the Jordanian dinar
Jordanian dinar
The dinar is the currency of Jordan. The dinar is divided into 10 dirham, 100 qirsh or 1000 fils....
is divided into 10 dirham, 100 qirsh/piastres, or 1000 fils. Many countries where Western Europe
Western Europe
Western Europe is a loose term for the collection of countries in the western most region of the European continents, though this definition is context-dependent and carries cultural and political connotations. One definition describes Western Europe as a geographic entity—the region lying in the...
an languages are spoken currently have their main units divided into 100 subunits. Some currencies that previously had subunits no longer do, because inflation has rendered the subunit useless. A prominent example is the Japanese yen
Japanese yen
The is the official currency of Japan. It is the third most traded currency in the foreign exchange market after the United States dollar and the euro. It is also widely used as a reserve currency after the U.S. dollar, the euro and the pound sterling...
, which was formerly divided into 100 sen or 1000 rin. Both subunits were demonetized at the end of 1953.

Occasionally, a super unit is used as a multiple of the main unit. Examples include Korea
Korea
Korea ) is an East Asian geographic region that is currently divided into two separate sovereign states — North Korea and South Korea. Located on the Korean Peninsula, Korea is bordered by the People's Republic of China to the northwest, Russia to the northeast, and is separated from Japan to the...
n won = 5 yang
Korean yang
The yang was the currency of Korea between 1892 and 1902. It was subdivided into 10 jeon , 100 bun and 5 yang = 1 hwan .-Etymology:The word yang is a cognate of the Chinese "tael"...
in 1893, Iranian toman
Iranian toman
The toman , is a superunit of the official currency of Iran, the rial. Toman, derived from a Mongolian word meaning ten thousand , was the currency of Iran until 1932. It was divided into 10,000 dinar. Between 1798 and 1825, the toman was also subdivided into 8 rial, each of 1250 dinar...
10 rials
Iranian rial
The rial is the currency of Iran. It is subdivided into 100 dinar but, because of the very low current value of the rial, no fraction of the rial is used in accounting....
(used informally today). In the Ottoman Empire
Ottoman Empire
The Ottoman EmpireIt was usually referred to as the "Ottoman Empire", the "Turkish Empire", the "Ottoman Caliphate" or more commonly "Turkey" by its contemporaries...
, lira and kuruş were super units at some point before becoming the main unit.

A decimal currency is a currency where the ratio between the main unit and the subunit is an integral power
Exponentiation
Exponentiation is a mathematical operation, written as an, involving two numbers, the base a and the exponent n...
of 10. Non-decimal currencies
Non-decimal currencies
A non-decimal currency is a currency which has sub-units that are a non-decimal fraction of the main unit, i.e. the number of sub-units in a main unit is not a power of 10.- Contemporary non-decimal currencies :...
are now rare but had some advantages in daily life transactions. For example, 1 South German Gulden
South German gulden
The Gulden was the currency of the states of southern Germany between 1754 and 1873. These states included Bavaria, Baden, Württemberg, Frankfurt and Hohenzollern....
= 60 Kreuzer
Kreuzer
The Kreuzer, in English usually kreutzer, was a silver coin and unit of currency existing in the southern German states prior to the unification of Germany, and in Austria.-Early history:...
. 60 can be divided into 2, 3, 4, 5, 6, 10, 12, 15, 20 or 30 parts that are still integer
Integer
The integers are formed by the natural numbers together with the negatives of the non-zero natural numbers .They are known as Positive and Negative Integers respectively...
s, making pricing easy. This advantage (in an age without mechanical or electronic calculators) and the lack of widespread accurate weighing apparatus (meaning an item might sometimes simply be divided in 2,4,6 etc.) coupled with tradition were the reasons why non-decimal currencies were used.

In theory, two countries currently use non-decimal currency: Mauritania (1 ouguiya = 5 khoums) and Madagascar (1 ariary
Malagasy ariary
The ariary is the currency of Madagascar. It is subdivided into 5 iraimbilanja and is one of only two non-decimal currencies currently circulating . The names ariary and iraimbilanja derive from the pre-colonial currency, with ariary being the name for a silver dollar...
= 5 iraimbilanja). In practice, however, the value of the main unit in each case is so low (less than 1/1000 of a United States dollar) that the sub-unit is not of any practical use and is rarely seen in circulation. In the case of the iraimbilanja, this is a carryover of the Madagascar's previous currency, the Malagasy franc, which had the ariary as a super unit worth 5 francs, and iraimbilanja was an alternate term for the franc. The last major countries to use non-decimal currencies in practice were the United Kingdom (until 1971), Ireland (1971), Malta (1972) and Nigeria (1973).

It is common to name a unit with a unit of weight
Units of measurement
A unit of measurement is a definite magnitude of a physical quantity, defined and adopted by convention and/or by law, that is used as a standard for measurement of the same physical quantity. Any other value of the physical quantity can be expressed as a simple multiple of the unit of...
, such as pound
Pound (currency)
The pound is a unit of currency in some nations. The term originated in England as the value of a pound of silver.The word pound is the English translation of the Latin word libra, which was the unit of account of the Roman Empire...
, lira
Lira
Lira is the name of the monetary unit of a number of countries, as well as the former currency of Italy, Malta, San Marino and the Vatican City and Israel. The term originates from the value of a Troy pound of high purity silver. The libra was the basis of the monetary system of the Roman Empire...
, and baht
Thai baht
The baht is the currency of Thailand. It is subdivided into 100 satang . The issuance of currency is the responsibility of the Bank of Thailand.-History:The baht, like the pound, originated from a traditional unit of mass...
. In most cases, these currencies were originally defined as that amount of some precious metal
Precious metal
A precious metal is a rare, naturally occurring metallic chemical element of high economic value.Chemically, the precious metals are less reactive than most elements, have high lustre, are softer or more ductile, and have higher melting points than other metals...
. Another choice of name is some form of derivative of the political entity. The Afghan afghani
Afghan afghani
The Afghani is the currency of Afghanistan. It is notionally subdivided into 100 pul , although there are no pul coins in circulation.-Original Afghani :...
and European euro
Euro
The euro is the official currency of the eurozone: 17 of the 27 member states of the European Union. It is also the currency used by the Institutions of the European Union. The eurozone consists of Austria, Belgium, Cyprus, Estonia, Finland, France, Germany, Greece, Ireland, Italy, Luxembourg,...
fall into this category. Sometimes the name is simply the name of the metal, of which the coins are made, such as Polish złoty and Vietnamese đồng.