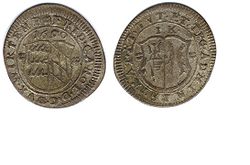 The Kreuzer, in English usually kreutzer, was a silver coin and unit of currency existing in the southern German states prior to the unification of Germany
German Empire
The German Empire refers to Germany during the "Second Reich" period from the unification of Germany and proclamation of Wilhelm I as German Emperor on 18 January 1871, to 1918, when it became a federal republic after defeat in World War I and the abdication of the Emperor, Wilhelm II.The German...
, and in Austria
Austria
Austria , officially the Republic of Austria , is a landlocked country of roughly 8.4 million people in Central Europe. It is bordered by the Czech Republic and Germany to the north, Slovakia and Hungary to the east, Slovenia and Italy to the south, and Switzerland and Liechtenstein to the...
.

In 1559 a value of 60 Kreuzer to 1 gulden
Guilder
Guilder is the English translation of the Dutch gulden — from Old Dutch for 'golden'. The guilder originated as a gold coin but has been a common name for a silver or base metal coin for some centuries...
had been adopted throughout the Southern states of the Holy Roman Empire
Holy Roman Empire
The Holy Roman Empire was a realm that existed from 962 to 1806 in Central Europe.It was ruled by the Holy Roman Emperor. Its character changed during the Middle Ages and the Early Modern period, when the power of the emperor gradually weakened in favour of the princes...
, but the northern German states declined to join, and used Groschen
Groschen
Groschen was the name for a coin used in various German-speaking states as well as some non-German-speaking countries of Central Europe , the Danubian principalities...
instead of Kreuzer. The Kreuzer in turn was worth about 4.2 Pfennig
Pfennig
The Pfennig , plural Pfennige, is an old German coin or note, which existed from the 9th century until the introduction of the euro in 2002....
, or pennies. Thus one (golden) Gulden was worth 60 Kreuzer, or 252 Pfennig. Later currencies adopted a standard relationship of 240 Pfennig = 60 Kreuzer = 1 Gulden.

The South German Currency Union of 1837 used a system of 60 Kreuzer = 1 Gulden
South German gulden
The Gulden was the currency of the states of southern Germany between 1754 and 1873. These states included Bavaria, Baden, Württemberg, Frankfurt and Hohenzollern....
and 1¾ Gulden = 1 Thaler, with the Kreuzer equal to the old Kreuzer Landmünze. These Kreuzer continued in circulation until decimalization, following German unification.

Austria–Hungary decimalized in 1857, adopting a system of 100 Kreuzer = 1 Gulden, Austrian Florin
Austro-Hungarian gulden
The Gulden or forint was the currency of the Austrian Empire and later the Austro-Hungarian Empire between 1754 and 1892 when it was replaced by the Krone/korona as part of the introduction of the gold standard. In Austria, the Gulden was initially divided into 60 Kreuzer, and in Hungary, the...
or Hungarian forint
Hungarian forint
The forint is the currency of Hungary. It is divided into 100 fillér, although fillér coins are no longer in circulation. The introduction of the forint on 1 August 1946 was a crucial step of the post-WWII stabilization of the Hungarian economy, and the currency remained relatively stable until...
, 1½ gulden = 1 Vereinsthaler
Vereinsthaler
The Vereinsthaler was a standard silver coin used in most German states and the Austrian Empire in the years prior to German unification.- Introduction :...
. It was known in Hungarian
Hungarian language
Hungarian is a Uralic language, part of the Ugric group. With some 14 million speakers, it is one of the most widely spoken non-Indo-European languages in Europe....
as krajczár (in contemporary Hungarian orthography: krajcár), in Czech
Czech language
Czech is a West Slavic language with about 12 million native speakers; it is the majority language in the Czech Republic and spoken by Czechs worldwide. The language was known as Bohemian in English until the late 19th century...
as krejcar, in Slovak
Slovak language
Slovak , is an Indo-European language that belongs to the West Slavic languages .Slovak is the official language of Slovakia, where it is spoken by 5 million people...
as grajciar, and in Romanian
Romanian language
Romanian Romanian Romanian (or Daco-Romanian; obsolete spellings Rumanian, Roumanian; self-designation: română, limba română ("the Romanian language") or românește (lit. "in Romanian") is a Romance language spoken by around 24 to 28 million people, primarily in Romania and Moldova...
as creiţar or crăiţar.