Encyclopedia
The demographics of Guatemala are diverse, constituting primarily of Mestizos, Amerindians and Europeans. About 60% of the population speak Spanish, with nearly all of the rest speaking Amerindian languages.

According to the CIA World Fact Book, Mestizo (mixed Amerindian-Spanish - in local Spanish called Ladino
Ladino
Ladino may refer to:*Ladino is the name used primarily in Israel for Judaeo-Spanish, a Sephardic language, primarily spoken among Sephardic Jews, or for the written form used in religious texts and translations; compare to Ashkenazic Jews' language, Yiddish*Ladino is also used for the variety of...
) and European made 59.4% of the population, and K'iche 9.1%, Kaqchikel 8.4%, Mam 7.9%, Q'eqchi 6.3%, other Mayan 8.6%, indigenous non-Mayan 0.2%, other 0.1%. Therefore, 40% of the population is Amerindian. Pure European population is not known because the country combines mestizos with whites.

Most of Guatemala
Guatemala
Guatemala is a country in Central America bordered by Mexico to the north and west, the Pacific Ocean to the southwest, Belize to the northeast, the Caribbean to the east, and Honduras and El Salvador to the southeast...
's population is rural, though urbanization
Urbanization
Urbanization, urbanisation or urban drift is the physical growth of urban areas as a result of global change. The United Nations projected that half of the world's population would live in urban areas at the end of 2008....
is accelerating. The predominant religion is Roman Catholicism, once the main faith of the population, into which many indigenous Guatemalans have incorporated traditional forms of worship. Protestantism
Protestantism
Protestantism is one of the three major groupings within Christianity. It is a movement that began in Germany in the early 16th century as a reaction against medieval Roman Catholic doctrines and practices, especially in regards to salvation, justification, and ecclesiology.The doctrines of the...
and traditional Maya religions
Maya mythology
Mayan mythology is part of Mesoamerican mythology and comprises all of the Mayan tales in which personified forces of nature, deities, and the heroes interacting with these play the main roles...
are practiced by an estimated 40% and 1% of the population, respectively.

Though the official language is Spanish
Spanish language
Spanish , also known as Castilian , is a Romance language in the Ibero-Romance group that evolved from several languages and dialects in central-northern Iberia around the 9th century and gradually spread with the expansion of the Kingdom of Castile into central and southern Iberia during the...
, it is often the second language among the indigenous population. However, the Peace Accords signed in December 1996 provide for the translation of some official documents and voting materials into several indigenous languages (see summary of main substantive accords).

Other racial groups include small numbers of Afro-Guatemalan
Afro-Guatemalan
Afro-Guatemalan are Guatemalans of African descent. Afro-Guatemalans comprise 1-2% of the population. They are of mainly English speaking West Indian and Garifuna population. They are found in the Caribbean coast, in Livingston , Puerto Barrios and Santa Tomas...
s and Garifuna of mixed African and indigenous Caribbean origins who live in the country's Eastern end. Asians, mostly of Chinese descent are descendants of farm workers and railroad laborers in the early 20th century. And thousands who are Middle Easterner descendants: Arabs
Arab diaspora
Arab diaspora refers to Arab immigrants, and their descendants who, voluntarily or as refugees, emigrated from their native lands and now reside in non-Arab countries, primarily in Latin America, and Europe, as well as North America and South Asia, parts of Southeast Asia, the Caribbean, and West...
, Lebanese
Lebanese people
The Lebanese people are a nation and ethnic group of Levantine people originating in what is today the country of Lebanon, including those who had inhabited Mount Lebanon prior to the creation of the modern Lebanese state....
, Palestinians, Syrians
Demographics of Syria
Syrians today are an overall indigenous Levantine people. While modern-day Syrians are commonly described as Arabs by virtue of their modern-day language and bonds to Arab culture and history...
and Turks
Turkish people
Turkish people, also known as the "Turks" , are an ethnic group primarily living in Turkey and in the former lands of the Ottoman Empire where Turkish minorities had been established in Bulgaria, Cyprus, Bosnia and Herzegovina, Georgia, Greece, Kosovo, Macedonia, and Romania...
came to Guatemala after World War I.

In 1900, Guatemala had a population of just 885,000. http://www.library.uu.nl/wesp/populstat/Americas/guatemac.htm Over the course of the twentieth century, the population of the country grew by a factor of fourteen. No other western hemisphere country saw such rapid growth. This has brought on difficulties for Guatemala as more people puts pressure in the nation's economic progress in a country where 70% live in dire poverty, and political stability was weakened by an inability to have effective population growth programs.

Over a million Guatemalan emigrants went to the US
United States
The United States of America is a federal constitutional republic comprising fifty states and a federal district...
in the 1980s and 1990s for a better life mostly because of the Civil War. Guatemalans are the 2nd largest national subgroup of Central Americans in the USA numbering 1,081,858 in 2009(after the El Salvadorans).

The largest population of Guatemalans is in Los Angeles
Los Ángeles
Los Ángeles is the capital of the province of Biobío, in the commune of the same name, in Region VIII , in the center-south of Chile. It is located between the Laja and Biobío rivers. The population is 123,445 inhabitants...
, but there are also established Guatemalan communities in Dallas, Houston, Miami, New York City
New York City
New York is the most populous city in the United States and the center of the New York Metropolitan Area, one of the most populous metropolitan areas in the world. New York exerts a significant impact upon global commerce, finance, media, art, fashion, research, technology, education, and...
, San Diego, San Francisco area, and Washington, DC. There are also Guatemalan immigrants living abroad in Canada
Canada
Canada is a North American country consisting of ten provinces and three territories. Located in the northern part of the continent, it extends from the Atlantic Ocean in the east to the Pacific Ocean in the west, and northward into the Arctic Ocean...
, Mexico
Mexico
The United Mexican States , commonly known as Mexico , is a federal constitutional republic in North America. It is bordered on the north by the United States; on the south and west by the Pacific Ocean; on the southeast by Guatemala, Belize, and the Caribbean Sea; and on the east by the Gulf of...
, Venezuela
Venezuela
Venezuela , officially called the Bolivarian Republic of Venezuela , is a tropical country on the northern coast of South America. It borders Colombia to the west, Guyana to the east, and Brazil to the south...
, Argentina
Argentina
Argentina , officially the Argentine Republic , is the second largest country in South America by land area, after Brazil. It is constituted as a federation of 23 provinces and an autonomous city, Buenos Aires...
, Europe, Palestine
Palestine
Palestine is a conventional name, among others, used to describe the geographic region between the Mediterranean Sea and the Jordan River, and various adjoining lands....
, Saudi Arabia
Saudi Arabia
The Kingdom of Saudi Arabia , commonly known in British English as Saudi Arabia and in Arabic as as-Sa‘ūdiyyah , is the largest state in Western Asia by land area, constituting the bulk of the Arabian Peninsula, and the second-largest in the Arab World...
, Egypt
Egypt
Egypt , officially the Arab Republic of Egypt, Arabic: , is a country mainly in North Africa, with the Sinai Peninsula forming a land bridge in Southwest Asia. Egypt is thus a transcontinental country, and a major power in Africa, the Mediterranean Basin, the Middle East and the Muslim world...
, Japan
Japan
Japan is an island nation in East Asia. Located in the Pacific Ocean, it lies to the east of the Sea of Japan, China, North Korea, South Korea and Russia, stretching from the Sea of Okhotsk in the north to the East China Sea and Taiwan in the south...
, South Korea
South Korea
The Republic of Korea , , is a sovereign state in East Asia, located on the southern portion of the Korean Peninsula. It is neighbored by the People's Republic of China to the west, Japan to the east, North Korea to the north, and the East China Sea and Republic of China to the south...
and Australia
Australia
Australia , officially the Commonwealth of Australia, is a country in the Southern Hemisphere comprising the mainland of the Australian continent, the island of Tasmania, and numerous smaller islands in the Indian and Pacific Oceans. It is the world's sixth-largest country by total area...
as well. 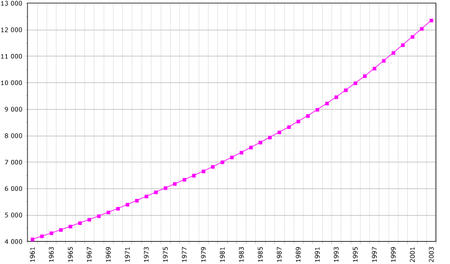 definition:
age 15 and over can read and write