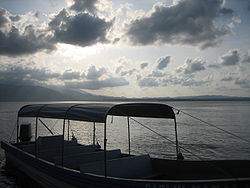 Puerto Barrios is a city in Guatemala
Guatemala
Guatemala is a country in Central America bordered by Mexico to the north and west, the Pacific Ocean to the southwest, Belize to the northeast, the Caribbean to the east, and Honduras and El Salvador to the southeast...
, located within the Gulf of Honduras
Gulf of Honduras
The Gulf or Bay of Honduras is a large inlet of the Caribbean Sea, indenting the coasts of Belize, Guatemala, and Honduras. From north to south, it runs for approximately 200 km from Dangriga, Belize, to La Ceiba, Honduras....
at
15°43′N 88°35′W. The bay in which the harbour is located is called Bahia de Amatique. Puerto Barrios is the departmental seat of Izabal department
Departments of Guatemala
||Guatemala is divided into 22 departments :#Alta Verapaz#Baja Verapaz#Chimaltenango#Chiquimula#Petén#El Progreso#El Quiché#Escuintla#Guatemala#Huehuetenango#Izabal#Jalapa#Jutiapa#Quetzaltenango#Retalhuleu#Sacatepéquez...
and the administrative seat of Puerto Barrios municipality.

Puerto Barrios was named after President Justo Rufino Barrios
Justo Rufino Barrios
Justo Rufino Barrios was a President of Guatemala known for his liberal reforms and his attempts to reunite Central America....
in 1884. It is Guatemala's main Caribbean Sea
Caribbean Sea
The Caribbean Sea is a sea of the Atlantic Ocean located in the tropics of the Western hemisphere. It is bounded by Mexico and Central America to the west and southwest, to the north by the Greater Antilles, and to the east by the Lesser Antilles....
port, together with its more modern twin port town just to the southwest, Santo Tomás de Castilla
Santo Tomás de Castilla
Santo Tomás de Castilla, also known as Matías de Gálvez is a port city in the Izabal Department, Guatemala. It is located at around . It lies at Amatique Bay off the Gulf of Honduras and is administratively a part of Puerto Barrios.-Belgian colony:...
. In 2003 the estimated population of Puerto Barrios was 40,900 people.

Puerto Barrios is located 297 kilometres (185 mi) northeast of Guatemala City. It is the terminus of Highway CA9 which begins at the Pacific port city of Puerto San José
Puerto San José
Puerto San José is a city on Guatemala's Pacific Ocean coast, in the department of Escuintla. It contains about 20,000 people, making it the largest place along the Pacific coast of Guatemala. It was the Pacific port for Guatemala, but this was superseded in the 20th century by Puerto Quetzal, a...
and traverses the country through Guatemala City
Guatemala City
Guatemala City , is the capital and largest city of the Republic of Guatemala and Central America...
. The earthquake on February 4 of 1976
1976 Guatemala earthquake
The 1976 Guatemala earthquake struck on February 4, 1976 at 03:01:43 local time . It was a 7.5 Mw earthquake, centered in the Motagua Fault, about 160 km northeast of Guatemala City, Guatemala...
, one of the worst in the history of the country, destroyed most of the port facilities of Puerto Barrios, and most modern cargo traffic moved to its twin port in Santo Tomás de Castilla
Santo Tomás de Castilla
Santo Tomás de Castilla, also known as Matías de Gálvez is a port city in the Izabal Department, Guatemala. It is located at around . It lies at Amatique Bay off the Gulf of Honduras and is administratively a part of Puerto Barrios.-Belgian colony:...
. Today, Puerto Barrios remains an important hub for Dole
Dole Food Company
Dole Food Company, Inc. is an American-based agricultural multinational corporation headquartered in Westlake Village, California. The company is the largest producer of fruits and vegetables in the world, operating with 74,300 full-time and seasonal employees who are responsible for over 300...
and Fresh Del Monte Produce
Fresh Del Monte Produce
Fresh Del Monte Produce is a global producer, marketer and distributor of fresh and fresh-cut fruit and vegetables. Fresh Del Monte Produce is also a producer and distributor of prepared fruit and vegetables, juices, beverages, snacks and desserts in Europe, the Middle East and Africa...
industries.

Puerto Barrios is a mix of mostly Afro-Guatemalans, Maya
Maya peoples
The Maya people constitute a diverse range of the Native American people of southern Mexico and northern Central America. The overarching term "Maya" is a collective designation to include the peoples of the region who share some degree of cultural and linguistic heritage; however, the term...
, Afro-Caribbean (such as Afro-Jamaicans), and other West Indian groups. Its heyday was in the latter 19th and early 20th centuries, following the construction of a railroad connecting large banana
Banana
Banana is the common name for herbaceous plants of the genus Musa and for the fruit they produce. Bananas come in a variety of sizes and colors when ripe, including yellow, purple, and red....
plantations with the shipping docks.

In a strange twist of history, the harbor was partly built by Theodore Roosevelt's Corps of Engineers in 1906-1908. Puerto Barrios is also the terminus for the United Fruit Company
United Fruit Company
It had a deep and long-lasting impact on the economic and political development of several Latin American countries. Critics often accused it of exploitative neocolonialism and described it as the archetypal example of the influence of a multinational corporation on the internal politics of the...
's railway, UFCO. UFCO still operates out of these two harbors.

Puerto Barrios is divided by many neighborhoods or Barrios such as El rastro, las champas, los tanques, la veinte, la veintedos, la catorce, la trece, el estrecho, etc. Although the town is small, due to its harbor nature, many of its visitors are ship workers who frequent the night entertainment centers throughout the town.

Among the many nearby tourist attractions are: The Mayan
Maya civilization
The Maya is a Mesoamerican civilization, noted for the only known fully developed written language of the pre-Columbian Americas, as well as for its art, architecture, and mathematical and astronomical systems. Initially established during the Pre-Classic period The Maya is a Mesoamerican...
ruins of Quirigua
Quiriguá
Quiriguá is an ancient Maya archaeological site in the department of Izabal in south-eastern Guatemala. It is a medium-sized site covering approximately along the lower Motagua River, with the ceremonial center about from the north bank. During the Maya Classic Period , Quiriguá was situated at...
. The Castillo de San Felipe
Castillo de San Felipe
The Castillo de San Felipe de Lara is a Spanish colonial fort located at the entrance to Lake Izabal in eastern Guatemala. Lake Izabal is connected with the Caribbean Sea via the Dulce River and El Golfete lake...
, an old Spanish fort in Río Dulce, guards the entrance to Lake Izabal
Lake Izabal
Lago de Izabal, also known as the Golfo Dulce, is the largest lake in Guatemala with a surface area of 589.6 km² and a maximum depth is 18 meters . The Polochic River is the largest river that drains into the lake...
. Another popular attraction is the lively town of Livingston
Livingston, Guatemala
Livingston is the name of a town in Izabal Department, eastern Guatemala, at the mouth of theRío Dulce at the Gulf of Honduras. The town serves as the municipal seat of the municipality of the same name.It was Guatemala's main port on the Caribbean Sea before the construction of nearby Puerto...
where Garifuna culture can be experienced first hand with its Punta
Punta
Punta is a Garifuna music and dance style performed at celebrations and festive occasions. Contemporary punta, including Belizean punta rock, arose in the last thirty years of the twentieth century in Belize, Honduras and Guatemala. It also has a following in Nicaragua, El Salvador, Southern Mexico...
and Yankunu dances.