Encyclopedia
Cyclopentadiene is an organic compound
Organic compound
An organic compound is any member of a large class of gaseous, liquid, or solid chemical compounds whose molecules contain carbon. For historical reasons discussed below, a few types of carbon-containing compounds such as carbides, carbonates, simple oxides of carbon, and cyanides, as well as the...
with the formula
Chemical formula
A chemical formula or molecular formula is a way of expressing information about the atoms that constitute a particular chemical compound....
C5H6. This colorless liquid has a strong and unpleasant odor. At room temperature, this cyclic diene
Diene
In organic chemistry a diene or diolefin is a hydrocarbon that contains two carbon double bonds.Conjugated dienes are functional groups, with a general formula of CnH2n-2. Dienes and alkynes are functional isomers...
dimerizes over the course of hours to give dicyclopentadiene
Dicyclopentadiene
Dicyclopentadiene, abbreviated DCPD, is a chemical compound with formula C10H12. At room temperature, it is a white crystalline solid with a camphor-like odor. Its energy density is 10,975 Wh/l....
via a Diels–Alder reaction. This dimer can be restored by heating to give the monomer.

Cyclopentadiene production is usually not distinguished from dicyclopentadiene since they are interconverted. They are obtained from coal tar (about 10 – 20 g/ton) and steam cracking from naphtha
Naphtha
Naphtha normally refers to a number of different flammable liquid mixtures of hydrocarbons, i.e., a component of natural gas condensate or a distillation product from petroleum, coal tar or peat boiling in a certain range and containing certain hydrocarbons. It is a broad term covering among the...
(about 14 kg/ton). To obtain cyclopentadiene monomer, commercial dicyclopentadiene is "cracked" by heating to ~ 180 °C. The monomer is collected by distillation, and used soon thereafter.

The hydrogen atoms in cyclopentadiene undergo rapid [1,5]-sigmatropic shifts
Sigmatropic reaction
A sigmatropic reaction in organic chemistry is a pericyclic reaction wherein the net result is one σ-bond is changed to another σ-bond in an uncatalyzed intramolecular process. The name sigmatropic is the result of a compounding of the long-established sigma designation from single carbon-carbon...
as indicated by 1H NMR spectra
Nuclear magnetic resonance
Nuclear magnetic resonance is a physical phenomenon in which magnetic nuclei in a magnetic field absorb and re-emit electromagnetic radiation...
recorded at various temperatures.

Famously, cyclopentadiene dimerizes via a reversible Diels–Alder reaction. The conversion occurs in hours at room temperature, but the monomer can be stored for days at −20 °C. Cyclopentadiene readily undergoes other Diels–Alder reactions with dienophiles such as 1,4-benzoquinone
1,4-Benzoquinone
1,4-Benzoquinone, commonly known as para-quinone, is a chemical compound with the formula C6H4O2. In a pure state, it forms bright-yellow crystals with a characteristic irritating odor, resembling that of chlorine, bleach, and hot plastic. Impure samples are often dark-colored due to the presence...
. Cycloaddition of O2 gives the bicyclic peroxide.

The compound is unusually acid
Acid
An acid is a substance which reacts with a base. Commonly, acids can be identified as tasting sour, reacting with metals such as calcium, and bases like sodium carbonate. Aqueous acids have a pH of less than 7, where an acid of lower pH is typically stronger, and turn blue litmus paper red...
ic (pKa 16) for a hydrocarbon
Hydrocarbon
In organic chemistry, a hydrocarbon is an organic compound consisting entirely of hydrogen and carbon. Hydrocarbons from which one hydrogen atom has been removed are functional groups, called hydrocarbyls....
, a fact explained by the high stability of the aromatic cyclopentadienyl anion, C
Carbon
Carbon is the chemical element with symbol C and atomic number 6. As a member of group 14 on the periodic table, it is nonmetallic and tetravalent—making four electrons available to form covalent chemical bonds...
5H
Hydrogen
Hydrogen is the chemical element with atomic number 1. It is represented by the symbol H. With an average atomic weight of , hydrogen is the lightest and most abundant chemical element, constituting roughly 75% of the Universe's chemical elemental mass. Stars in the main sequence are mainly...
5−. Simple compounds of this anion (such as the commercially available sodium cyclopentadienide
Sodium cyclopentadienide
Sodium cyclopentadienide is an organosodium compound with the formula C5H5Na. The compound is often abbreviated as NaCp or CpNa, where Cp− is the cyclopentadienide anion. Cp is also used as an abbreviation for the cyclopentadienyl ligand in coordination chemistry.-Preparation:Sodium...
) are often depicted as salts, although the free anion is not present in appreciable quantities in solution. Deprotonation
Deprotonation
Deprotonation is the removal of a proton from a molecule, forming the conjugate base.The relative ability of a molecule to give up a proton is measured by its pKa value. A low pKa value indicates that the compound is acidic and will easily give up its proton to a base...
can be achieved with a variety of bases, typically sodium hydride or even sodium metal. The anion serves as a nucleophile in organic synthesis
Organic synthesis
Organic synthesis is a special branch of chemical synthesis and is concerned with the construction of organic compounds via organic reactions. Organic molecules can often contain a higher level of complexity compared to purely inorganic compounds, so the synthesis of organic compounds has...
, the preparation of modified cyclopentadienyl ligands, and metallocenes, described in the next section.

Metallocenes and related cyclopentadienyl derivatives have been heavily investigated and represent a cornerstone of organometallic chemistry
Organometallic chemistry
Organometallic chemistry is the study of chemical compounds containing bonds between carbon and a metal. Since many compounds without such bonds are chemically similar, an alternative may be compounds containing metal-element bonds of a largely covalent character...
owing to their high stability. Indeed, the first metallocene characterised, ferrocene
Ferrocene
Ferrocene is an organometallic compound with the formula Fe2. It is the prototypical metallocene, a type of organometallic chemical compound consisting of two cyclopentadienyl rings bound on opposite sides of a central metal atom. Such organometallic compounds are also known as sandwich compounds...
, was prepared the way many other metallocenes are prepared: by combining alkali metal derivatives of the form MC5H5 with dihalides of the transition metal
Transition metal
The term transition metal has two possible meanings:*The IUPAC definition states that a transition metal is "an element whose atom has an incomplete d sub-shell, or which can give rise to cations with an incomplete d sub-shell." Group 12 elements are not transition metals in this definition.*Some...
s: As typical example, nickelocene
Nickelocene
Nickelocene is the organonickel compound with the formula Ni2. Also known as bisnickel or NiCp2, this bright green paramagnetic solid is of enduring academic interest, although it yet has no practical applications....
forms upon treating nickel(II) chloride
Nickel(II) chloride
Nickel chloride , is the chemical compound NiCl2. The anhydrous salt is yellow, but the more familiar hydrate NiCl2·6H2O is green. It is very rarely found in nature as mineral nickelbischofite. A dihydrate is also known. In general nickel chloride, in various forms, is the most important source of...
with sodium cyclopentadiene in THF
ThF
Follicular B helper T cells , are antigen-experienced CD4+ T cells found in the B cell follicles of secondary lymphoid organs such as lymph nodes, spleens and Peyer's patches, and are identified by their constitutive expression of the B cell follicle homing receptor CXCR5...
.

Organometallic complexes that include both the cyclopentadienyl anion and cyclopentadiene itself are known, one example of which is the rhodocene
Rhodocene
Rhodocene, formally known as bisrhodium, is a chemical compound with the formula [Rh2]. Each molecule contains an atom of rhodium bound between two planar systems of five carbon atoms known as cyclopentadienyl rings in a sandwich arrangement. It is an organometallic compound as it has covalent...
derivative produced from the rhodocene monomer in protic solvent
Protic solvent
In chemistry a protic solvent is a solvent that has a hydrogen atom bound to an oxygen or a nitrogen . In general terms, any molecular solvent that contains dissociable H+ is called a protic solvent. The molecules of such solvents can donate an H+...
s.

Cyclopentadiene is mainly useful as a precursor to cyclopentene
Cyclopentene
Cyclopentene is a chemical compound with the formula 58. It is a colorless liquid with a petrol-like odor. It is one of the cycloalkenes.Cyclopentene is produced industrially in large amounts...
and related monomers such as ethylidenenorbornene. Such species are used in the production of specialty polymers. Cyclopentadienyl complexes serve as reagents in organic synthesis. It was also used as the starting material in Leo Paquette
Leo Paquette
Leo Armand Paquette is an American organic chemist. He received his Ph.D. in 1959 from the Massachusetts Institute of Technology and has been a Professor of Chemistry at the Ohio State University since 1969. He is the author of over 1000 papers and has also edited works such as the Encyclopedia...
's 1982 dodecahedrane
Dodecahedrane
Dodecahedrane is a chemical compound first synthesised by Leo Paquette of Ohio State University in 1982, primarily for the "aesthetically pleasing symmetry of the dodecahedral framework"....
synthesis. The first step involved reductive
Redox
Redox reactions describe all chemical reactions in which atoms have their oxidation state changed....
dimerization of the molecule to give dihydrofulvalene
Fulvalene
A fulvalene is a hydrocarbon obtained by formally cross-conjugating two rings through a common exocyclic double bond. The name is derived from the similarly structured fulvenes which lack one ring...
, not simple addition to give dicyclopentadiene. 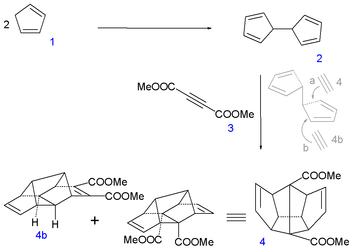 The commonly used abbreviation of the cyclopentadienyl anion is Cp. The abbreviation played a part in the naming of copernicium: the original proposal for the element's symbol was also Cp, but because of the abbreviation for this anion and the fact that lutetium was originally named cassiopeium
Cassiopeia (constellation)
Cassiopeia is a constellation in the northern sky, named after the vain queen Cassiopeia in Greek mythology, who boasted about her unrivalled beauty. Cassiopea was one of the 48 constellations listed by the 2nd century Greek astronomer Ptolemy, and it remains one of the 88 modern constellations today...
and had Cp for the symbol as well, the symbol for copernicium was changed to Cn.