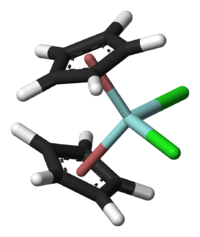 The alkali-metal cyclopentadienyl complexes react with various transition metal compounds to form a variety of complexes that are throughout chemistry
Chemistry
Chemistry is the science of matter, especially its chemical reactions, but also its composition, structure and properties. Chemistry is concerned with atoms and their interactions with other atoms, and particularly with the properties of chemical bonds....
. The Cp ligand typically bonds to metals through all five carbon atoms, like in ferrocene
Ferrocene
Ferrocene is an organometallic compound with the formula Fe2. It is the prototypical metallocene, a type of organometallic chemical compound consisting of two cyclopentadienyl rings bound on opposite sides of a central metal atom. Such organometallic compounds are also known as sandwich compounds...
, [FeCp2]; chromocene
Chromocene
Chromocene is an organochromium compound with the formula Cr2, often abbreviated Cp2Cr. This sandwich compound is structurally similar to ferrocene but does not follow the 18-electron rule because it only has 16 electrons. It also paramagnetic and highly reducing...
, [CrCp2]; cobaltocene
Cobaltocene
Cobaltocene, known also as biscobalt or even "bis Cp cobalt", is an organocobalt compound with the formula Co2. It is a dark purple solid that sublimes readily slightly above room temperature. Cobaltocene was discovered shortly after ferrocene, the first metallocene...
, [CoCp2]; and nickelocene
Nickelocene
Nickelocene is the organonickel compound with the formula Ni2. Also known as bisnickel or NiCp2, this bright green paramagnetic solid is of enduring academic interest, although it yet has no practical applications....
, [NiCp2]. When the Cp rings are mutually parallel the compound is known as a sandwich
Sandwich compound
In organometallic chemistry, a sandwich compound is a chemical compound featuring a metal bound by haptic covalent bonds to two arene ligands. The arenes have the formula CnHn, substituted derivatives and heterocyclic derivatives...
complex. This area of organometallic chemistry
Organometallic chemistry
Organometallic chemistry is the study of chemical compounds containing bonds between carbon and a metal. Since many compounds without such bonds are chemically similar, an alternative may be compounds containing metal-element bonds of a largely covalent character...
was first discovered in 1954 with the realization of the structure of ferrocene. Some metallocene
Metallocene
A metallocene is a compound typically consisting of two cyclopentadienyl anions bound to a metal center in the oxidation state II, with the resulting general formula 2M. Closely related to the metallocenes are the metallocene derivatives, e.g. titanocene dichloride, vanadocene dichloride...
s, notably rhodocene
Rhodocene
Rhodocene, formally known as bisrhodium, is a chemical compound with the formula [Rh2]. Each molecule contains an atom of rhodium bound between two planar systems of five carbon atoms known as cyclopentadienyl rings in a sandwich arrangement. It is an organometallic compound as it has covalent...
, [RhCp2], and nickelocene, do exist in some forms where the metal-to-ring binding does not include all five ring atoms.

Other metals form bent structures, such as zirconocene dichloride
Zirconocene dichloride
Zirconocene dichloride is an organozirconium compound composed of a zirconium central atom, with two cyclopentadienyl and two chloro ligands. It is a colourless diamagnetic solid that is somewhat stable in air.-Preparation:...
, [ZrCp2Cl2], which is a catalyst for ethylene
Ethylene
Ethylene is a gaseous organic compound with the formula . It is the simplest alkene . Because it contains a carbon-carbon double bond, ethylene is classified as an unsaturated hydrocarbon. Ethylene is widely used in industry and is also a plant hormone...
polymerization
Polymerization
In polymer chemistry, polymerization is a process of reacting monomer molecules together in a chemical reaction to form three-dimensional networks or polymer chains...
.

Metals and cyclopentadienyl moieties connected by π-bonds
Pi bond
In chemistry, pi bonds are covalent chemical bonds where two lobes of one involved atomic orbital overlap two lobes of the other involved atomic orbital...
are called π-complexes. π-Complexes, especially in the η5-type coordination mode, are the most typical of the three types of complexes. Almost all of the transition metal
Transition metal
The term transition metal has two possible meanings:*The IUPAC definition states that a transition metal is "an element whose atom has an incomplete d sub-shell, or which can give rise to cations with an incomplete d sub-shell." Group 12 elements are not transition metals in this definition.*Some...
s, that is, group 4 to 10 metals, employ this coordination mode. η3-type π-complexes are also seen, depending on the electronic configuration of the metal centre. In this mode, three atoms are bonded to the metal as an allyl
Allyl
An allyl group is a substituent with the structural formula H2C=CH-CH2R, where R is the connection to the rest of the molecule. It is made up of a methylene , attached to a vinyl group . The name is derived from the Latin word for garlic, Allium sativum. Theodor Wertheim isolated an allyl...
-anion ligand, and the remaining two of the Cp are more like a simple alkene.

σ-Complexes have a direct σ-bond
Sigma bond
In chemistry, sigma bonds are the strongest type of covalent chemical bond. They are formed by head-on overlapping between atomic orbitals. Sigma bonding is most clearly defined for diatomic molecules using the language and tools of symmetry groups. In this formal approach, a σ-bond is...
between the metal and one of the carbons of the cyclopentadienyl group. Typical examples of this type of complex are group 14 metal complexes such as CpSiMe3, Cp2Sn, and CpPb. CpSiMe3 is commonly used as the starting material for the synthesis of group 4 metal cyclopentadienyl complexes.

Most cyclopentadienyl complexes are prepared by treating a metal halide with sodium cyclopentadienide
Sodium cyclopentadienide
Sodium cyclopentadienide is an organosodium compound with the formula C5H5Na. The compound is often abbreviated as NaCp or CpNa, where Cp− is the cyclopentadienide anion. Cp is also used as an abbreviation for the cyclopentadienyl ligand in coordination chemistry.-Preparation:Sodium...
(NaCp). For the preparation of some particularly robust complexes, cyclopentadiene
Cyclopentadiene
Cyclopentadiene is an organic compound with the formula C5H6. This colorless liquid has a strong and unpleasant odor. At room temperature, this cyclic diene dimerizes over the course of hours to give dicyclopentadiene via a Diels–Alder reaction...
is employed in the presence of a conventional base
Base (chemistry)
For the term in genetics, see base A base in chemistry is a substance that can accept hydrogen ions or more generally, donate electron pairs. A soluble base is referred to as an alkali if it contains and releases hydroxide ions quantitatively...
such as NaOH. Specialized alternatives to NaCp include trimethylsilyl
Trimethylsilyl
A trimethylsilyl group is a functional group in organic chemistry. This group consists of three methyl groups bonded to a silicon atom [−Si3], which is in turn bonded to the rest of a molecule...
cyclopentadiene (CpSi
Si
Si, si, or SI may refer to :- Measurement, mathematics and science :* International System of Units , the modern international standard version of the metric system...
Me3) and thallium
Thallium
Thallium is a chemical element with the symbol Tl and atomic number 81. This soft gray poor metal resembles tin but discolors when exposed to air. The two chemists William Crookes and Claude-Auguste Lamy discovered thallium independently in 1861 by the newly developed method of flame spectroscopy...
cyclopentadienide (CpTl) in an ether
Ether
Ethers are a class of organic compounds that contain an ether group — an oxygen atom connected to two alkyl or aryl groups — of general formula R–O–R'. A typical example is the solvent and anesthetic diethyl ether, commonly referred to simply as "ether"...
eal solvent
Solvent
A solvent is a liquid, solid, or gas that dissolves another solid, liquid, or gaseous solute, resulting in a solution that is soluble in a certain volume of solvent at a specified temperature...
. Most Cp complexes have various other ligand
Ligand
In coordination chemistry, a ligand is an ion or molecule that binds to a central metal atom to form a coordination complex. The bonding between metal and ligand generally involves formal donation of one or more of the ligand's electron pairs. The nature of metal-ligand bonding can range from...
s besides a cyclopentadienyl ligand, such as carbonyl, halogen, alkyl, and so on. Biscyclopentadienyl complexes are called metallocene
Metallocene
A metallocene is a compound typically consisting of two cyclopentadienyl anions bound to a metal center in the oxidation state II, with the resulting general formula 2M. Closely related to the metallocenes are the metallocene derivatives, e.g. titanocene dichloride, vanadocene dichloride...
s. It is often the case that these complexes are thermally stable, and they are used for various catalysts. For example, some of the early transition metal complexes, such as Cp2TiCl2
Titanocene dichloride
Titanocene dichloride is the organotitanium compound with the formula 2TiCl2, commonly abbreviated as Cp2TiCl2. This metallocene is a common reagent in organometallic and organic synthesis. It exists as a bright red solid that slowly hydrolyzes in air...
and Cp2ZrCl2 with aluminoxane
Aluminoxane
Aluminoxanes refer to compounds that are obtained by the partial hydrolysis of trialkylaluminium compounds. Aluminoxanes serve as activators for catalytic olefin polymerisation, such as the Ziegler-Natta catalyst. They also serve a function as scavenger for impurities Aluminoxanes refer to...
as a co-catalyst, can catalyze olefin polymerization. Such species are called Kaminsky-type catalysts
Kaminsky catalyst
A Kaminsky catalyst is a catalytic system for alkene polymerization discovered in 1980. Kaminsky catalysts are based on metallocenes of group 4 transition metals with methylaluminoxane . These catalysts are a type of Ziegler-Natta catalyst, but they are homogeneous and show extremely high activity...
.

Some representative reactions leading to such Cp*-metal complexes include

Some Cp* complexes are prepared using hexamethyl Dewar benzene as the precursor. This method was traditionally used for [Rh(C5Me5)Cl2]2.
The source of this article is wikipedia, the free encyclopedia.  The text of this article is licensed under the GFDL.