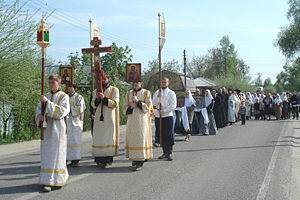 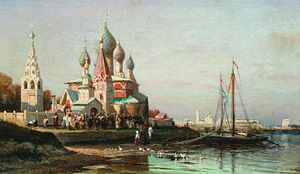 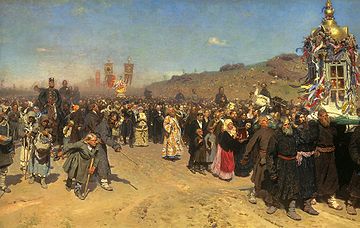 A Crucession, or Cross Procession , is a procession that takes place in the Eastern Orthodox
Eastern Orthodox Church
The Orthodox Church, officially called the Orthodox Catholic Church and commonly referred to as the Eastern Orthodox Church, is the second largest Christian denomination in the world, with an estimated 300 million adherents mainly in the countries of Belarus, Bulgaria, Cyprus, Georgia, Greece,...
and Eastern Catholic liturgical traditions. The name derives from the fact that the procession is headed by a cross
Cross
A cross is a geometrical figure consisting of two lines or bars perpendicular to each other, dividing one or two of the lines in half. The lines usually run vertically and horizontally; if they run obliquely, the design is technically termed a saltire, although the arms of a saltire need not meet...
.

Normally, the Crucession is preceded by a lantern. Then comes the cross, flanked by processional banners
Khorugv
Khorúgv , is a religious banner used liturgically in the Eastern Catholic and Eastern Orthodox Churches.The khorugv or banner consists of an icon of Christ, the Theotokos or a saint, either painted or embroidered on a rectangular piece of cloth. The cloth will often be pointed, swallow-tailed, or...
and icons. The Choir and Clergy will come next, followed by the faithful. If there are altar server
Altar server
An altar server is a lay assistant to a member of the clergy during a Christian religious service. An altar server attends to supporting tasks at the altar such as fetching and carrying, ringing the altar bell and so on....
s, the Crucession will be accompanied by incense and candles. During the Crucession, the choir sings hymns that are particular to the event the Crucession celebrates. Crucessions will often circle around the outside of the Temple
Temple
A temple is a structure reserved for religious or spiritual activities, such as prayer and sacrifice, or analogous rites. A templum constituted a sacred precinct as defined by a priest, or augur. It has the same root as the word "template," a plan in preparation of the building that was marked out...
(church building) three times, then come to stop on the front steps of the building, where the next portion of the service will take place. Other Crucessions will be in the form of a procession from the Temple to a particular location where the next portion of the service will take place.

The most well-known Crucessions are: 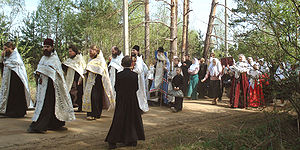 In 1991, the relics of St. Seraphim of Sarov
Seraphim of Sarov
Saint Seraphim of Sarov , born Prokhor Moshnin , is one of the most renowned Russian monks and mystics in the Orthodox Church. He is generally considered the greatest of the 19th century startsy and, arguably, the first...
were rediscovered after being hidden in a Soviet anti-religious
Religion in the Soviet Union
The Soviet Union was the first state to have as an ideological objective the elimination of religion and its replacement with atheism. To that end, the communist regime confiscated religious property, ridiculed religion, harassed believers, and propagated atheism in schools...
museum for seventy years. This caused a sensation in post-Soviet Russia, and indeed throughout the Orthodox world. A crucession was formed to escort the relics, on foot, all the way from Moscow to St. Seraphim-Diveyevo Convent
Serafimo-Diveevsky Monastery
Serafimo-Diveevsky Monastery, or Saint Seraphim-Diveyevo Monastery, or Holy Trinity-Saint Seraphim-Diveyevo Monastery near Sarov , and near the city of Nizhny Novgorod , in the Nizhny Novgorod Oblast, Russia. It is situated in a region considered to have immense spiritual significance...
, where they remain to this day. The Patriarch of Moscow himself took part in a portion of this crucession.

During April 2, 2006 — July 18, 2006 an international Crucession was carried out across Transnistria
Transnistria
Transnistria is a breakaway territory located mostly on a strip of land between the Dniester River and the eastern Moldovan border to Ukraine...
, Ukraine
Ukraine
Ukraine is a country in Eastern Europe. It has an area of 603,628 km², making it the second largest contiguous country on the European continent, after Russia...
, Belarus
Belarus
Belarus , officially the Republic of Belarus, is a landlocked country in Eastern Europe, bordered clockwise by Russia to the northeast, Ukraine to the south, Poland to the west, and Lithuania and Latvia to the northwest. Its capital is Minsk; other major cities include Brest, Grodno , Gomel ,...
, and Russia
Russia
Russia or , officially known as both Russia and the Russian Federation , is a country in northern Eurasia. It is a federal semi-presidential republic, comprising 83 federal subjects...
.

On May 20, 2007 probably the longest krestny khod was started in the city of Vladivostok
Vladivostok
The city is located in the southern extremity of Muravyov-Amursky Peninsula, which is about 30 km long and approximately 12 km wide.The highest point is Mount Kholodilnik, the height of which is 257 m...
on Russia's Pacific coast that will go all the way to Moscow
Moscow
Moscow is the capital, the most populous city, and the most populous federal subject of Russia. The city is a major political, economic, cultural, scientific, religious, financial, educational, and transportation centre of Russia and the continent...
.