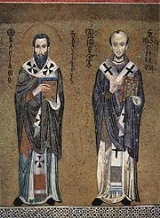 Encyclopedia
Divine Liturgy refers to the appearance of a deity to a human or other being, or to a divine disclosure....
, and on Holy Thursday and Holy Saturday
Holy Saturday
Holy Saturday , sometimes known as Easter Eve or Black Saturday, is the day after Good Friday. It is the day before Easter and the last day of Holy Week in which Christians prepare for Easter...
, it is celebrated as a vesperal
Vespers
Vespers is the evening prayer service in the Western Catholic, Eastern Catholic, and Eastern Orthodox, Anglican, and Lutheran liturgies of the canonical hours...
liturgy. In some traditions, Saint Basil's Liturgy is also celebrated on the Exaltation of the Life-giving Cross
Feast of the Cross
In the Christian liturgical calendar, there are several different Feasts of the Cross, all of which commemorate the cross used in the crucifixion of Jesus....
on September 14. All together, St. Basil's liturgy is celebrated 10 times out of the liturgical year.

Additionally, the Liturgy of the Presanctified Gifts
Liturgy of the Presanctified Gifts
The Liturgy of the Presanctified Gifts, informally Presanctified Liturgy, is an Eastern Christian liturgical service for the distribution of communion on the weekdays of Great Lent....
(6th century A.D.
Christianity in the 6th century
In 533 Roman Emperor Justinian in Constantinople launched a military campaign to reclaim the western provinces from the Arian Germans, starting with North Africa and proceeding to Italy. Though he was temporarily successful in recapturing much of the western Mediterranean he destroyed the urban...
), is used on Wednesdays and Fridays during Great Lent
Great Lent
Great Lent, or the Great Fast, is the most important fasting season in the church year in Eastern Christianity, which prepares Christians for the greatest feast of the church year, Pascha . In many ways Great Lent is similar to Lent in Western Christianity...
and on the first three days of Holy Week
Holy Week
Holy Week in Christianity is the last week of Lent and the week before Easter...
. It is essentially the office of vespers
Vespers
Vespers is the evening prayer service in the Western Catholic, Eastern Catholic, and Eastern Orthodox, Anglican, and Lutheran liturgies of the canonical hours...
with a communion service added, the Holy Gifts having been consecrated and reserved the previous Sunday. It is traditionally attributed to St. Gregory the Dialogist
Pope Gregory I
Pope Gregory I , better known in English as Gregory the Great, was pope from 3 September 590 until his death...
. The Divine Liturgy of St. Mark was also observed in the Orthodox (Chalcedonian) Patriarchate of Alexandria on at least that Saint's day until fairly recent times.

Note: Psalms are numbered according to the Greek Septuagint. For the Hebrew Masoretic numbering that is more familiar in the West, usually add '1'. (See the main Psalms article for an exact correspondence table.)

The format of Divine Liturgy is fixed, although the specific readings and hymn
Hymn
A hymn is a type of song, usually religious, specifically written for the purpose of praise, adoration or prayer, and typically addressed to a deity or deities, or to a prominent figure or personification...
s vary with season and feast.

While arrangements may vary from liturgy to liturgy, the Divine Liturgy always consists of three interrelated parts:

A typical celebration of the Byzantine Liturgy consists of:

This part of the Liturgy is private, said only by the priest and deacon. It symbolizes the hidden years of Christ's earthly life.


Liturgy of the Catechumens


Liturgy of the Faithful

In the early Church, only Baptised members in good standing were allowed to attend this portion of the Liturgy. Today, catechumens are still dismissed but visitors are usually permitted to stay. Some jurisdictions also permit the catechumens to remain.

Parts marked ° indicate portions that can change according to the day or liturgical season of the year. Some parts change at every Divine Liturgy, some parts only change at Pascha
Easter
Easter is the central feast in the Christian liturgical year. According to the Canonical gospels, Jesus rose from the dead on the third day after his crucifixion. His resurrection is celebrated on Easter Day or Easter Sunday...
(Easter).

Note that almost all texts are chanted throughout the Divine Liturgy, not only hymns but litanies, prayers, creed confession and even readings from the Bible. The sole exception is the sermon.


The Liturgy of St. Basil is celebrated on most Sundays and contains the shortest anaphora. The Liturgy of St. Gregory is usually used during the feasts of the Church but not exclusively. In addition the clergy performing the Liturgy can combine extracts of The Liturgies of St. Cyril and St. Gregory to the more frequently used St. Basil at the discretion of the Priest or Bishop.