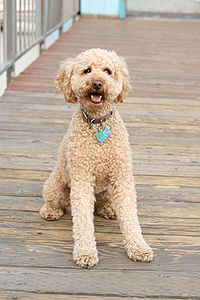 The term is also used at times to refer to a domestic animal of unknown ancestry where the breed status of only one parent or grandparent is known, though the term "mixed breeding" is technically more accurate. The term outcross is used to describe a type of crossbreeding used within a purebred breed to increase the genetic diversity within the breed, particularly when there is a need to avoid inbreeding
Inbreeding
Inbreeding is the reproduction from the mating of two genetically related parents. Inbreeding results in increased homozygosity, which can increase the chances of offspring being affected by recessive or deleterious traits. This generally leads to a decreased fitness of a population, which is...
.

In general use, the term hybrid is commonly used to refer to plant breeding, such as that of maize
Maize
Maize known in many English-speaking countries as corn or mielie/mealie, is a grain domesticated by indigenous peoples in Mesoamerica in prehistoric times. The leafy stalk produces ears which contain seeds called kernels. Though technically a grain, maize kernels are used in cooking as a vegetable...
, though "hybrid" is also used to describe crosses between animals of the same genus but different species, such as the mule
Mule
A mule is the offspring of a male donkey and a female horse. Horses and donkeys are different species, with different numbers of chromosomes. Of the two F1 hybrids between these two species, a mule is easier to obtain than a hinny...
. "Crossbred" is more often used to refer to animal breeding within a single species.

In cattle, there are systems of crossbreeding. One is used when the purebred females are particularly adapted to a specific environment, and are crossed with purebred bulls from another environment to produce a generation having traits of both parents.

The large number of breeds of sheep, which vary greatly, creates an opportunity for cross breeding to be used to tailor production of lambs to the goal of the individual stockman.

A crossbred or hybrid dog is a cross between two (sometimes more) known breeds, and is usually distinguished from a mixed-breed dog
Mixed-breed dog
A mixed-breed dog, also known as a mutt or mongrel, is a dog whose ancestry is generally unknown and that has characteristics of two or more types of breeds. A mixed-breed may be a cross-breed dog, a random-bred dog, or a descendant of feral or pariah dog populations...
, which has ancestry from many sources, some of which may not be known. Crossbreeds are popular, due to the belief that they have increased hybrid vigor without loss of attractiveness of the dog. Certain planned cross-breeding between purebred dogs of different breeds can produce puppies worth more than their purebred parents, due to a high demand. 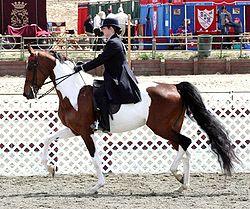 Crossbreeding in horses is often done with the intent of ultimately creating a new breed of horse. One type of modern crossbreeding in horses is used to create many of the warmblood
Warmblood
Warmbloods are a group of middle-weight horse types and breeds, primarily originating in Europe, registered with organizations that are characterized by open studbook policy, studbook selection, and the aim of breeding for equestrian sport...
breeds. Warmbloods are a type of horse used in the sport horse
Sport horse
Sport horse, or Sporthorse, is a term used to describe a type of horse, rather than any particular breed. The term generally refers to horses bred for the traditional Olympic equestrian sporting events of dressage, eventing, show jumping, and combined driving. The precise definition varies...
disciplines, usually registered in an open stud book by a studbook selection
Studbook selection
Studbook selection is a process used in certain breeds of horses to select breeding stock. It allows a breed registry to direct the evolution of the breed towards the ideal by eliminating unhealthy or undesirable animals from the population. The removal of individuals from a population is called...
procedure that evaluates conformation, pedigree and, in some animals, a training or performance standard. Most warmblood breeds began as a cross of draft horse
Draft horse
A draft horse , draught horse or dray horse , less often called a work horse or heavy horse, is a large horse bred for hard, heavy tasks such as ploughing and farm labour...
breeds on Thoroughbred
Thoroughbred
The Thoroughbred is a horse breed best known for its use in horse racing. Although the word thoroughbred is sometimes used to refer to any breed of purebred horse, it technically refers only to the Thoroughbred breed...
s, but have, in some cases, developed over the past century to the point where they are considered to be a true-breeding population and have a closed stud book. Other types of recognized crossbreeding include that within the American Quarter Horse
American Quarter Horse
The American Quarter Horse is an American breed of horse that excels at sprinting short distances. Its name came from its ability to outdistance other breeds of horses in races of a quarter mile or less; some individuals have been clocked at speeds up to 55 mph...
, which will register horses with one Thoroughbred parent and one registered Quarter Horse parent in the "Appendix" registry, and allow such animals full breed registration status as Quarter Horses if they meet a certain performance standard. Another well-known crossbred horse is the Anglo-Arabian
Anglo-Arabian
The Anglo-Arabian or Anglo-Arab is a crossbred horse that now also has its own status as a horse breed. It is a Thoroughbred crossed with an Arabian. The cross can be made between a Thoroughbred stallion and an Arabian mare, or vice-versa...
, which may be produced by a purebred Arabian horse
Arabian horse
The Arabian or Arab horse is a breed of horse that originated on the Arabian Peninsula. With a distinctive head shape and high tail carriage, the Arabian is one of the most easily recognizable horse breeds in the world. It is also one of the oldest breeds, with archaeological evidence of horses...
crossed on a Thoroughbred, or by various crosses of Anglo-Arabians with other Anglo-Arabians, as long as the ensuing animal never has more than 75% or less than 25% of each breed represented in its pedigree.

A hybrid animal is one with parentage of two separate species, differentiating it from crossbred animals, which have parentage of the same species. Hybrids are usually, but not always, sterile.

One of the most ancient types of hybrid animal is the mule
Mule
A mule is the offspring of a male donkey and a female horse. Horses and donkeys are different species, with different numbers of chromosomes. Of the two F1 hybrids between these two species, a mule is easier to obtain than a hinny...
, a cross between a female horse
Horse
The horse is one of two extant subspecies of Equus ferus, or the wild horse. It is a single-hooved mammal belonging to the taxonomic family Equidae. The horse has evolved over the past 45 to 55 million years from a small multi-toed creature into the large, single-toed animal of today...
and a male donkey
Donkey
The donkey or ass, Equus africanus asinus, is a domesticated member of the Equidae or horse family. The wild ancestor of the donkey is the African Wild Ass, E...
or ass. The liger
Liger
The liger is a hybrid cross between a male lion and a tigress . Thus, it has parents with the same genus but of different species. It is distinct from the similar hybrid tiglon. It is the largest of all known cats and extant felines.Ligers enjoy swimming, which is a characteristic of tigers, and...
is a hybrid cross between a male lion
Lion
The lion is one of the four big cats in the genus Panthera, and a member of the family Felidae. With some males exceeding 250 kg in weight, it is the second-largest living cat after the tiger...
and female tiger
Tiger
The tiger is the largest cat species, reaching a total body length of up to and weighing up to . Their most recognizable feature is a pattern of dark vertical stripes on reddish-orange fur with lighter underparts...
. The yattle is a cross between a cow and a yak
Yak
The yak, Bos grunniens or Bos mutus, is a long-haired bovine found throughout the Himalayan region of south Central Asia, the Tibetan Plateau and as far north as Mongolia and Russia. In addition to a large domestic population, there is a small, vulnerable wild yak population...
. Other crosses include the tigon
Tigon
Tigon may refer to:*Tiglon, a hybrid between a tiger and a lioness*Tigon British Film Productions, a British film production and distribution company*Tigon Studios, a video game production company...
(between a female lion and male tiger) and yakalo
Yakalo
The yakalo is a cross of the yak and the American bison . It was produced by hybridisation experiments in the 1920s, when crosses were made between yak bulls and both pure bison cows and bison-cattle hybrid cows...
(between a yak and buffalo). The Incas recognized that hybrids of Lama glama (llama) and Lama pacos (alpaca) resulted in a hybrid with none of the advantages of either parent.

A mixed breed animal is defined as having undocumented or unknown parentage, while a crossbreed, as a rule has known, usually purebred
Purebred
Purebreds, also called purebreeds, are cultivated varieties or cultivars of an animal species, achieved through the process of selective breeding...
parents of two distinct breeds or varieties. A dog of unknown parentage is often called a mixed-breed dog
Mixed-breed dog
A mixed-breed dog, also known as a mutt or mongrel, is a dog whose ancestry is generally unknown and that has characteristics of two or more types of breeds. A mixed-breed may be a cross-breed dog, a random-bred dog, or a descendant of feral or pariah dog populations...
, "mutt" or "mongrel." A cat of unknown parentage is often referred to as a moggy. A horse of unknown bloodlines is a grade horse
Grade horse
A Grade horse is a horse whose parentage is unknown, unidentifiable, or of significantly mixed breeding. This differs from purebred animals of known bloodlines and also differs from deliberately crossbred animals that are produced with an intent of either creating a new breed of horse or an animal...
.