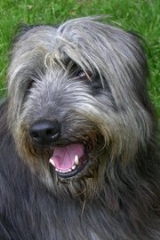 Overview
A mixed-breed dog, also known as a mutt or mongrel, is a dog whose ancestry is generally unknown and that has characteristics of two or more types of breeds. A mixed-breed may be a cross-breed dog, a random-bred
Landrace
A landrace is a local variety of a domesticated animal or plant species which has developed largely by natural processes, by adaptation to the natural and cultural environment in which it lives. It differs from a formal breed which has been bred deliberately to conform to a particular standard...
dog, or a descendant of feral
Free-ranging dog
A free-ranging dog is any dog that is not contained. The term encompasses various loose categories relating to the ownership, behavior, and descent of such dogs, including wild dogs, feral dogs, stray dogs, street dogs, and village dogs, as well as dogs allowed to come and go freely by their owners...
or pariah dog
Pariah dog
The term pariah dog originally referred to Chinese/Indian feral dogs of a particular type, but it is now used by the United Kennel Club to refer to a purebred dog category.- Feral dogs of India :...
populations. "Random-bred" is a genetic term meaning an animal, population, or breed that was bred or developed without planned intervention of humans; and whose ancestry and genetic makeup is generally not known.
When the term mixed-breed is used for populations of dogs that have not been intentionally bred, it is technically a misnomer.

Hi, i'm considering buying a puppy who is a mix of samoyed and rough collie/ border collie. Does anyone have experience with this mix (or one somewhat...
More
x