The town of Corfu stands on the broad part of a peninsula, whose termination in the Venetian citadel
Citadel
A citadel is a fortress for protecting a town, sometimes incorporating a castle. The term derives from the same Latin root as the word "city", civis, meaning citizen....
is cut off from it by an artificial fosse
Moat
A moat is a deep, broad ditch, either dry or filled with water, that surrounds a castle, other building or town, historically to provide it with a preliminary line of defence. In some places moats evolved into more extensive water defences, including natural or artificial lakes, dams and sluices...
formed in a natural gully, with a salt-water ditch at the bottom, that serves also as a kind of marina known as Contra-Fossa. The old city having grown up within fortifications, where every metre of ground was precious, is a labyrinth of narrow streets paved with cobblestones, sometimes tortuous but mostly pleasant, colourful and sparkling clean. These streets are called "kantounia" and the older ones sometimes follow the gentle irregularities of the ground while many of them are too narrow for vehicular traffic. There is promenade by the seashore towards the bay of Garitsa , and also a handsome esplanade between the town and the citadel called where upscale restaurants and European style bistros abound. The origin of the name Liston has several explanations: many former Venetian cities have a square of that name, coming from a Venetian
Venetian language
Venetian or Venetan is a Romance language spoken as a native language by over two million people, mostly in the Veneto region of Italy, where of five million inhabitants almost all can understand it. It is sometimes spoken and often well understood outside Veneto, in Trentino, Friuli, Venezia...
word meaning evening promenade, but it can also refer to the closed-list aspect of an up-scale area reserved to the nobility registered in the Libro d'Oro
Libro d'Oro
The Libro d'Oro , once the formal directory of nobles in the Republic of Venice, is now a respected, privately-published directory of the nobility of Italy ....
.

The citadel was depicted on the reverse
Obverse and reverse
Obverse and its opposite, reverse, refer to the two flat faces of coins and some other two-sided objects, including paper money, flags , seals, medals, drawings, old master prints and other works of art, and printed fabrics. In this usage, obverse means the front face of the object and reverse...
of the Greek 500 drachmas
Greek drachma
Drachma, pl. drachmas or drachmae was the currency used in Greece during several periods in its history:...
banknote of 1983-2001.

The old fortifications of the town, formerly so extensive as to require a force of from 10,000 to 20,000 troops to man them, were in great part thrown down by the English in the 19th century. In several parts of the town may be found houses of the Venetian
Republic of Venice
The Republic of Venice or Venetian Republic was a state originating from the city of Venice in Northeastern Italy. It existed for over a millennium, from the late 7th century until 1797. It was formally known as the Most Serene Republic of Venice and is often referred to as La Serenissima, in...
time, with some traces of past splendour, but they are few compared to the British Neoclassical
Neoclassical architecture
Neoclassical architecture was an architectural style produced by the neoclassical movement that began in the mid-18th century, manifested both in its details as a reaction against the Rococo style of naturalistic ornament, and in its architectural formulas as an outgrowth of some classicizing...
housing of the 19th and early 20th centuries. The Palace of St. Michael and St. George
Palace of St. Michael and St. George
Palace of St. Michael and St. George is a palace in Corfu City on the island of Corfu, Greece. The Greek name is "Palaia Anaktora" ....
, built in 1815 by Sir Thomas Maitland (1759–1824; Lord High Commissioner of the Ionian Islands
Ionian Islands
The Ionian Islands are a group of islands in Greece. They are traditionally called the Heptanese, i.e...
) is a large structure of white Maltese stone. Near Gasturi stands the Pompei
Pompei
Pompei is a city and comune in the province of Naples in Campania, southern Italy, famous for its ancient Roman ruins. As of 2010 its population was of 25,671.-History:...
an style Achilleion
Achilleion (Corfu)
Achilleion is a palace built in Corfu by Empress of Austria Elisabeth of Bavaria, also known as Sissi, after a suggestion by Austrian Consul Alexander von Watzberg. Elisabeth was a woman obsessed with beauty, and very powerful, but tragically vulnerable since the loss of her only son, Crown...
, the palace built for the Empress Elizabeth of Austria
Elisabeth of Bavaria
Elisabeth of Austria was the spouse of Franz Joseph I, and therefore both Empress of Austria and Queen of Hungary. She also held the titles of Queen of Bohemia and Croatia, among others...
, and purchased in 1907 by the German emperor, William II.

Based on the ICOMOS
International Council on Monuments and Sites
The International Council on Monuments and Sites is a professional association that works for the conservation and protection of cultural heritage places around the world...
evaluation of the old town of Corfu, it was inscribed on the World Heritage List. The ICOMOS experts have noted that "about 70% of the pre-20th century buildings date from the British period" and that "whole blocks were destroyed" in the Old Town by the World War II blitzes; these were "replaced by new constructions in the 1960s and 1970s". The urban fabric was classified as being predominantly of the Neoclassical period "without special architectural features for which it could be distinguished". 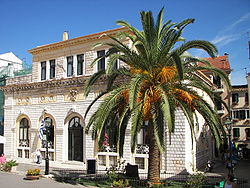 Corfu is twinned
Town twinning
Twin towns and sister cities are two of many terms used to describe the cooperative agreements between towns, cities, and even counties in geographically and politically distinct areas to promote cultural and commercial ties.- Terminology :...
with: Kruševac
Kruševac
Kruševac is a city and municipality, and the administrative center of the Rasina District, in central Serbia. According to the 2011 census, the municipality has a population of 127,429, while the town has 57,627....
, Serbia
Serbia
Serbia , officially the Republic of Serbia , is a landlocked country located at the crossroads of Central and Southeast Europe, covering the southern part of the Carpathian basin and the central part of the Balkans...
, since 19 October 1985) Paphos
Paphos
Paphos , sometimes referred to as Pafos, is a coastal city in the southwest of Cyprus and the capital of Paphos District. In antiquity, two locations were called Paphos: Old Paphos and New Paphos. The currently inhabited city is New Paphos. It lies on the Mediterranean coast, about west of the...
, Cyprus
Cyprus
Cyprus , officially the Republic of Cyprus , is a Eurasian island country, member of the European Union, in the Eastern Mediterranean, east of Greece, south of Turkey, west of Syria and north of Egypt. It is the third largest island in the Mediterranean Sea.The earliest known human activity on the...
, since 5 July 1992 Famagusta
Famagusta
Famagusta is a city on the east coast of Cyprus and is capital of the Famagusta District. It is located east of Nicosia, and possesses the deepest harbour of the island.-Name:...
, Cyprus, since 13 August 1994 Meissen
Meissen
Meissen is a town of approximately 30,000 about northwest of Dresden on both banks of the Elbe river in the Free State of Saxony, in eastern Germany. Meissen is the home of Meissen porcelain, the Albrechtsburg castle, the Gothic Meissen Cathedral and the Meissen Frauenkirche...
, Germany
Germany
Germany , officially the Federal Republic of Germany , is a federal parliamentary republic in Europe. The country consists of 16 states while the capital and largest city is Berlin. Germany covers an area of 357,021 km2 and has a largely temperate seasonal climate...
, since 26 September 1996 Troisdorf
Troisdorf
Troisdorf is a town in the Rhein-Sieg-Kreis , in North Rhine-Westphalia, Germany.-Geography:Troisdorf is located approx. 22 kilometers south of Cologne and 13 kilometers north east of Bonn.-Division of the town:...
, Germany, since 4 October 1996 Asha, Cyprus, since 3 May 1998 Brindisi, Italy, since 21 May 1998 Vathi, Samos Greece, since 29 July 1998 Carovigno
Carovigno
Carovigno is a town and comune in the province of Brindisi, Puglia, Italy. Its area, part of Upper Salento, is renowned for the production of high quality olive oil.-International relations:Carovigno is twinned with: Corfu, Greece- External links :*...
, Italy, since 7 May 2000 Verona
Verona
Verona ; German Bern, Dietrichsbern or Welschbern) is a city in the Veneto, northern Italy, with approx. 265,000 inhabitants and one of the seven chef-lieus of the region. It is the second largest city municipality in the region and the third of North-Eastern Italy. The metropolitan area of Verona...
, Italy, since August 2000 Koper/Capodistria, Slovenia
Slovenia
Slovenia , officially the Republic of Slovenia , is a country in Central and Southeastern Europe touching the Alps and bordering the Mediterranean. Slovenia borders Italy to the west, Croatia to the south and east, Hungary to the northeast, and Austria to the north, and also has a small portion of...
, since 7 December 2000) Sarandë
Sarandë
Sarandë or Saranda is the capital of the District of Sarandë, Albania, and is one of the most important tourist attractions of the Albanian Riviera. It is situated on an open sea gulf of the Ionian Sea in the Mediterranean 2 nautical miles from the Greek island of Corfu. The city of Saranda has a...
, Albania
Albania
Albania , officially known as the Republic of Albania , is a country in Southeastern Europe, in the Balkans region. It is bordered by Montenegro to the northwest, Kosovo to the northeast, the Republic of Macedonia to the east and Greece to the south and southeast. It has a coast on the Adriatic Sea...
, since 12 July 2001) Tremetousia
Tremetousia
Tremetousia is a village in the Larnaca District of Cyprus, located 7 km east of Athienou. The town is one of only four villages in the Larnaca District under the control of the occupying Turkish forces, the other three being Arsos, Melouseia and Pergamos....
, Cyprus, since 9 December 2001 Ioannina
Ioannina
Ioannina , often called Jannena within Greece, is the largest city of Epirus, north-western Greece, with a population of 70,203 . It lies at an elevation of approximately 500 meters above sea level, on the western shore of lake Pamvotis . It is located within the Ioannina municipality, and is the...
, Greece
Greece
Greece , officially the Hellenic Republic , and historically Hellas or the Republic of Greece in English, is a country in southeastern Europe....
, since 21 December 2002 Belgrade
Belgrade
Belgrade is the capital and largest city of Serbia. It is located at the confluence of the Sava and Danube rivers, where the Pannonian Plain meets the Balkans. According to official results of Census 2011, the city has a population of 1,639,121. It is one of the 15 largest cities in Europe...
, Serbia
Serbia
Serbia , officially the Republic of Serbia , is a landlocked country located at the crossroads of Central and Southeast Europe, covering the southern part of the Carpathian basin and the central part of the Balkans...
, since 25 February 2010 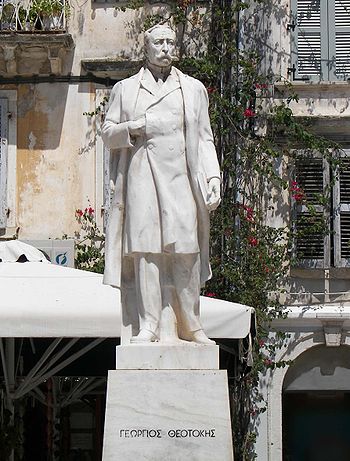 Corfu plays a central role in the science-fiction novel Year Zero, by Jeff Long. The epidemic that ravages through the world's population originates at a rich archaeological artifacts collector's mansion in or around Corfu, when a 2000 year old vial is opened, containing a lethal virus. This virus also receives the name of Corfu.