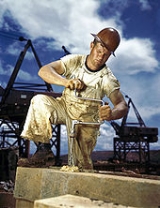 Encyclopedia
A construction worker or builder is a professional
Professional
A professional is a person who is paid to undertake a specialised set of tasks and to complete them for a fee. The traditional professions were doctors, lawyers, clergymen, and commissioned military officers. Today, the term is applied to estate agents, surveyors , environmental scientists,...
, tradesman
Tradesman
This article is about the skilled manual worker meaning of the term; for other uses see Tradesperson .A tradesman is a skilled manual worker in a particular trade or craft. Economically and socially, a tradesman's status is considered between a laborer and a professional, with a high degree of both...
, or labourer who directly participates in the physical construction
Construction
In the fields of architecture and civil engineering, construction is a process that consists of the building or assembling of infrastructure. Far from being a single activity, large scale construction is a feat of human multitasking...
of infrastructure
Infrastructure
Infrastructure is basic physical and organizational structures needed for the operation of a society or enterprise, or the services and facilities necessary for an economy to function...
.

The division of labour
Division of labour
Division of labour is the specialisation of cooperative labour in specific, circumscribed tasks and likeroles. Historically an increasingly complex division of labour is closely associated with the growth of total output and trade, the rise of capitalism, and of the complexity of industrialisation...
of construction encompasses a diverse range of specialized skills
Skill (labor)
Skill is a measure of a worker's expertise, specialization, wages, and supervisory capacity. Skilled workers are generally more trained, higher paid, and have more responsibilities than unskilled workers....
, as well as manual labour
Manual labour
Manual labour , manual or manual work is physical work done by people, most especially in contrast to that done by machines, and also to that done by working animals...
. 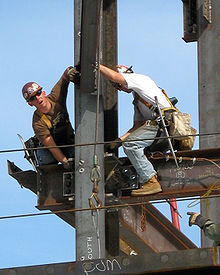 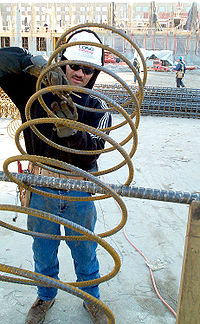 Among the many work-related occupational safety and health
Occupational safety and health
Occupational safety and health is a cross-disciplinary area concerned with protecting the safety, health and welfare of people engaged in work or employment. The goal of all occupational safety and health programs is to foster a safe work environment...
hazards that construction workers face are falls from heights, falls from vehicles, electrocution
Electrocution
Electrocution is a type of electric shock that, as determined by a stopped heart, can end life. Electrocution is frequently used to refer to any electric shock received but is technically incorrect; the choice of definition varies from dictionary to dictionary...
, and burial during earthworks
Earthworks (engineering)
Earthworks are engineering works created through the moving or processing of quantities of soil or unformed rock.- Civil engineering use :Typical earthworks include roads, railway beds, causeways, dams, levees, canals, and berms...
operations. Workers may also be exposed to asbestos
Asbestos
Asbestos is a set of six naturally occurring silicate minerals used commercially for their desirable physical properties. They all have in common their eponymous, asbestiform habit: long, thin fibrous crystals...
, dangerous solvent
Solvent
A solvent is a liquid, solid, or gas that dissolves another solid, liquid, or gaseous solute, resulting in a solution that is soluble in a certain volume of solvent at a specified temperature...
s, noise pollution
Noise pollution
Noise pollution is excessive, displeasing human, animal or machine-created environmental noise that disrupts the activity or balance of human or animal life...
, and particulates
Particulates
Particulates – also known as particulate matter , suspended particulate matter , fine particles, and soot – are tiny subdivisions of solid matter suspended in a gas or liquid. In contrast, aerosol refers to particles and/or liquid droplets and the gas together. Sources of particulate matter can be...
such as cement dust.

Hard hat
Hard hat
A hard hat is a type of helmet predominantly used in workplace environments, such as construction sites, to protect the head from injury by falling objects, impact with other objects, debris, bad weather and electric shock. Inside the helmet is a suspension that spreads the helmet's weight over the...
s and steel-toe boots are perhaps the most common personal protective equipment worn by construction workers. A risk assessment
Risk assessment
Risk assessment is a step in a risk management procedure. Risk assessment is the determination of quantitative or qualitative value of risk related to a concrete situation and a recognized threat...
may deem that other protective equipment is appropriate, such as glove
Glove
A glove is a garment covering the hand. Gloves have separate sheaths or openings for each finger and the thumb; if there is an opening but no covering sheath for each finger they are called "fingerless gloves". Fingerless gloves with one large opening rather than individual openings for each...
s, goggles
Goggles
Goggles or safety glasses are forms of protective eyewear that usually enclose or protect the area surrounding the eye in order to prevent particulates, water or chemicals from striking the eyes. They are used in chemistry laboratories and in woodworking. They are often used in snow sports as well,...
, or high-visibility clothing
High-visibility clothing
High-visibility clothing, a type of personal protective equipment , is any clothing worn that has highly reflective properties or a colour that is easily discernible from any background. Yellow waistcoats worn by emergency services are a common example....
.