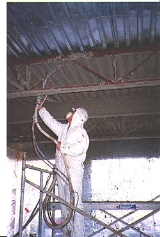 Overview
Plaster is a building material used for coating walls and ceilings. Plaster starts as a dry powder similar to mortar
Mortar (masonry)
Mortar is a workable paste used to bind construction blocks together and fill the gaps between them. The blocks may be stone, brick, cinder blocks, etc. Mortar becomes hard when it sets, resulting in a rigid aggregate structure. Modern mortars are typically made from a mixture of sand, a binder...
or cement
Cement
In the most general sense of the word, a cement is a binder, a substance that sets and hardens independently, and can bind other materials together. The word "cement" traces to the Romans, who used the term opus caementicium to describe masonry resembling modern concrete that was made from crushed...
and like those materials it is mixed with water to form a paste which liberates heat and then hardens. Unlike mortar and cement, plaster remains quite soft after setting, and can be easily manipulated with metal tools or even sandpaper
Sandpaper
Sandpaper, also known as glasspaper, is a heavy paper with abrasive material attached to its surface.Sandpaper is part of the "coated abrasives" family of abrasive products. It is used to remove small amounts of material from surfaces, either to make them smoother , to remove a layer of material...
. These characteristics make plaster suitable for a finishing, rather than a load-bearing material.

The term plaster can refer to gypsum
Gypsum
Gypsum is a very soft sulfate mineral composed of calcium sulfate dihydrate, with the chemical formula CaSO4·2H2O. It is found in alabaster, a decorative stone used in Ancient Egypt. It is the second softest mineral on the Mohs Hardness Scale...
plaster (also known as plaster of Paris), lime plaster
Lime plaster
Lime plaster is type of plaster composed of hydrated lime, sand and water. Lime plaster is similar to Lime mortar, the main difference is the based on use rather than composition. Traditional lime plaster contains also horse hair to reinforce plaster....
, or cement plaster.
Gypsum plaster, or Plaster of Paris, is employed by mixing water with calcium sulfate
Calcium sulfate
Calcium sulfate is a common laboratory and industrial chemical. In the form of γ-anhydrite , it is used as a desiccant. It is also used as a coagulant in products like tofu. In the natural state, unrefined calcium sulfate is a translucent, crystalline white rock...
hemihydrate
Hydrate
Hydrate is a term used in inorganic chemistry and organic chemistry to indicate that a substance contains water. The chemical state of the water varies widely between hydrates, some of which were so labeled before their chemical structure was understood....
, nominally CaSO4·1/2H2O.

What are the dangers of handling old plaster lime mortar used in historic buildings?
More
x