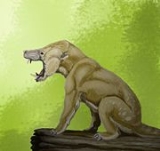 Encyclopedia
Condylarthra is an order of extinct placental mammals known primarily from the Paleocene
Paleocene
The Paleocene or Palaeocene, the "early recent", is a geologic epoch that lasted from about . It is the first epoch of the Palaeogene Period in the modern Cenozoic Era...
and Eocene
Eocene
The Eocene Epoch, lasting from about 56 to 34 million years ago , is a major division of the geologic timescale and the second epoch of the Paleogene Period in the Cenozoic Era. The Eocene spans the time from the end of the Palaeocene Epoch to the beginning of the Oligocene Epoch. The start of the...
epochs. Condylarths are among the most characteristic Paleocene mammals and they illustrate the evolution
Evolution
Evolution is any change across successive generations in the heritable characteristics of biological populations. Evolutionary processes give rise to diversity at every level of biological organisation, including species, individual organisms and molecules such as DNA and proteins.Life on Earth...
ary level of the Paleocene mammal fauna.

When compared to today's mammals, condylarths are relatively unspecialized placental mammals. However, in comparison to their insectivorous ancestors, members of the Condylarthra show the first signs of specializing to become omnivore
Omnivore
Omnivores are species that eat both plants and animals as their primary food source...
s or even herbivore
Herbivore
Herbivores are organisms that are anatomically and physiologically adapted to eat plant-based foods. Herbivory is a form of consumption in which an organism principally eats autotrophs such as plants, algae and photosynthesizing bacteria. More generally, organisms that feed on autotrophs in...
s.

Since larger land-bound herbivores were absent since the extinction
Extinction
In biology and ecology, extinction is the end of an organism or of a group of organisms , normally a species. The moment of extinction is generally considered to be the death of the last individual of the species, although the capacity to breed and recover may have been lost before this point...
of the dinosaur
Dinosaur
Dinosaurs are a diverse group of animals of the clade and superorder Dinosauria. They were the dominant terrestrial vertebrates for over 160 million years, from the late Triassic period until the end of the Cretaceous , when the Cretaceous–Paleogene extinction event led to the extinction of...
s, the shift in diet
Diet (nutrition)
In nutrition, diet is the sum of food consumed by a person or other organism. Dietary habits are the habitual decisions an individual or culture makes when choosing what foods to eat. With the word diet, it is often implied the use of specific intake of nutrition for health or weight-management...
from insectivorous to more herbivorous trophic categories triggered the tremendous evolutionary radiation
Evolutionary radiation
An evolutionary radiation is an increase in taxonomic diversity or morphological disparity, due to adaptive change or the opening of ecospace. Radiations may affect one clade or many, and be rapid or gradual; where they are rapid, and driven by a single lineage's adaptation to their environment,...
of the condylarths that we can observe throughout the Paleocene, resulting in the different groups of ungulate
Ungulate
Ungulates are several groups of mammals, most of which use the tips of their toes, usually hoofed, to sustain their whole body weight while moving. They make up several orders of mammals, of which six to eight survive...
s (or "hoof
Hoof
A hoof , plural hooves or hoofs , is the tip of a toe of an ungulate mammal, strengthened by a thick horny covering. The hoof consists of a hard or rubbery sole, and a hard wall formed by a thick nail rolled around the tip of the toe. The weight of the animal is normally borne by both the sole...
ed mammals") that form the dominant herbivores in most Cenozoic
Cenozoic
The Cenozoic era is the current and most recent of the three Phanerozoic geological eras and covers the period from 65.5 mya to the present. The era began in the wake of the Cretaceous–Tertiary extinction event at the end of the Cretaceous that saw the demise of the last non-avian dinosaurs and...
animal communities on land, except on the island
Island
An island or isle is any piece of sub-continental land that is surrounded by water. Very small islands such as emergent land features on atolls can be called islets, cays or keys. An island in a river or lake may be called an eyot , or holm...
continent of Australia
Australia
Australia , officially the Commonwealth of Australia, is a country in the Southern Hemisphere comprising the mainland of the Australian continent, the island of Tasmania, and numerous smaller islands in the Indian and Pacific Oceans. It is the world's sixth-largest country by total area...
.

Here, the term Ungulata refers to a subgroup of placental mammals that are descendants
Kinship
Kinship is a relationship between any entities that share a genealogical origin, through either biological, cultural, or historical descent. And descent groups, lineages, etc. are treated in their own subsections....
of a common ancestor
Ancestor
An ancestor is a parent or the parent of an ancestor ....
(i.e. homologous
Homology (biology)
Homology forms the basis of organization for comparative biology. In 1843, Richard Owen defined homology as "the same organ in different animals under every variety of form and function". Organs as different as a bat's wing, a seal's flipper, a cat's paw and a human hand have a common underlying...
to), the most primitive condylarth. Among recent mammals, Paenungulata
Paenungulata
Paenungulata is a taxon that groups some remarkable mammals, including three orders that are extant: Proboscidea , Sirenia , and Hyracoidea . At least two more orders are known only as fossils, namely Embrithopoda and Desmostylia...
(hyrax
Hyrax
A hyrax is any of four species of fairly small, thickset, herbivorous mammals in the order Hyracoidea. The rock hyrax Procavia capensis, the yellow-spotted rock hyrax Heterohyrax brucei, the western tree hyrax Dendrohyrax dorsalis, and the southern tree hyrax, Dendrohyrax arboreus live in Africa...
es, elephant
Elephant
Elephants are large land mammals in two extant genera of the family Elephantidae: Elephas and Loxodonta, with the third genus Mammuthus extinct...
s, and sea cows), Perissodactyla (horse
Horse
The horse is one of two extant subspecies of Equus ferus, or the wild horse. It is a single-hooved mammal belonging to the taxonomic family Equidae. The horse has evolved over the past 45 to 55 million years from a small multi-toed creature into the large, single-toed animal of today...
s, rhinoceros
Rhinoceros
Rhinoceros , also known as rhino, is a group of five extant species of odd-toed ungulates in the family Rhinocerotidae. Two of these species are native to Africa and three to southern Asia....
es, and tapir
Tapir
A Tapir is a large browsing mammal, similar in shape to a pig, with a short, prehensile snout. Tapirs inhabit jungle and forest regions of South America, Central America, and Southeast Asia. There are four species of Tapirs: the Brazilian Tapir, the Malayan Tapir, Baird's Tapir and the Mountain...
s), Artiodactyla (pig
Pig
A pig is any of the animals in the genus Sus, within the Suidae family of even-toed ungulates. Pigs include the domestic pig, its ancestor the wild boar, and several other wild relatives...
s, antelope
Antelope
Antelope is a term referring to many even-toed ungulate species indigenous to various regions in Africa and Eurasia. Antelopes comprise a miscellaneous group within the family Bovidae, encompassing those old-world species that are neither cattle, sheep, buffalo, bison, nor goats...
, camel
Camel
A camel is an even-toed ungulate within the genus Camelus, bearing distinctive fatty deposits known as humps on its back. There are two species of camels: the dromedary or Arabian camel has a single hump, and the bactrian has two humps. Dromedaries are native to the dry desert areas of West Asia,...
s, hippos
Hippopotamus
The hippopotamus , or hippo, from the ancient Greek for "river horse" , is a large, mostly herbivorous mammal in sub-Saharan Africa, and one of only two extant species in the family Hippopotamidae After the elephant and rhinoceros, the hippopotamus is the third largest land mammal and the heaviest...
, and their relatives), Cetacea
Cetacea
The order Cetacea includes the marine mammals commonly known as whales, dolphins, and porpoises. Cetus is Latin and is used in biological names to mean "whale"; its original meaning, "large sea animal", was more general. It comes from Ancient Greek , meaning "whale" or "any huge fish or sea...
(whale
Whale
Whale is the common name for various marine mammals of the order Cetacea. The term whale sometimes refers to all cetaceans, but more often it excludes dolphins and porpoises, which belong to suborder Odontoceti . This suborder also includes the sperm whale, killer whale, pilot whale, and beluga...
s), and Tubulidentata (aardvark
Aardvark
The aardvark is a medium-sized, burrowing, nocturnal mammal native to Africa...
s) are traditionally regarded as members of the Ungulata. Besides these, several extinct animals also belong to this group, especially the endemic
Endemic (ecology)
Endemism is the ecological state of being unique to a defined geographic location, such as an island, nation or other defined zone, or habitat type; organisms that are indigenous to a place are not endemic to it if they are also found elsewhere. For example, all species of lemur are endemic to the...
South America
South America
South America is a continent situated in the Western Hemisphere, mostly in the Southern Hemisphere, with a relatively small portion in the Northern Hemisphere. The continent is also considered a subcontinent of the Americas. It is bordered on the west by the Pacific Ocean and on the north and east...
n orders of ungulates (Meridiungulata
Meridiungulata
Meridiungulata is an extinct clade with the rank of cohort or super-order, containing the South-American ungulates: Pyrotheria , Astrapotheria, Notoungulata and Litopterna...
). Although many ungulates have hoofs, this feature does not define the Ungulata. Some condylarths indeed have small hoofs on their feet, but the most primitive forms are claw
Claw
A claw is a curved, pointed appendage, found at the end of a toe or finger in most mammals, birds, and some reptiles. However, the word "claw" is also often used in reference to an invertebrate. Somewhat similar fine hooked structures are found in arthropods such as beetles and spiders, at the end...
ed.

Recent molecular and DNA research has reorganised the picture of mammalian evolution. Paenungulates and tubulidentates are seen as Afrotheria
Afrotheria
Afrotheria is a clade of mammals, the living members of which belong to groups from Africa or of African origin: golden moles, sengis , tenrecs, aardvarks, hyraxes, elephants and sea cows. The common ancestry of these animals was not recognized until the late 1990s...
ns, and no longer seen as closely related to the Laurasiatheria
Laurasiatheria
Laurasiatheria is a large group of placental mammals believed to have originated on the northern supercontinent of Laurasia. It includes shrews, hedgehogs, pangolins, bats, whales, most hoofed mammals, and carnivorans, among others....
n perissodactyls, artiodactyls, and cetaceans, implying that hooves were acquired independently (i.e. were analogous
Analogy (biology)
An analogy is a trait or an organ that appears similar in two unrelated organisms. The cladistic term for the same phenomenon is homoplasy, from Greek for same form. Biological anologies are often the result of convergent evolution....
) by at least two different mammalian lineages, once in the Afrotheria and once in the Laurasiatheria. This raises the possibility that Condylarthra itself is polyphyletic: the several condylarth groups may not be related to each other at all. Indeed condylarths are increasingly regarded as a 'wastebasket' taxon, though true relationships remain in many cases unresolved.

In addition to meridiungulates and living ungulates, a condylarthran ancestry has been proposed for several other extinct groups of mammals, including Mesonychia and Dinocerata
Dinocerata
Dinocerata mammals are an extinct order of plant-eating, rhinoceros-like hoofed creatures famous for their paired horns and tusk-like canine teeth...
.