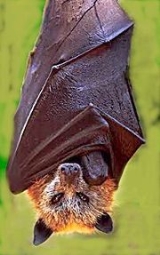 Encyclopedia
Laurasiatheria is a large group of placental mammals believed to have originated on the northern supercontinent of Laurasia
Laurasia
In paleogeography, Laurasia was the northernmost of two supercontinents that formed part of the Pangaea supercontinent from approximately...
. It includes shrew
Shrew
A shrew or shrew mouse is a small molelike mammal classified in the order Soricomorpha. True shrews are also not to be confused with West Indies shrews, treeshrews, otter shrews, or elephant shrews, which belong to different families or orders.Although its external appearance is generally that of...
s, hedgehog
Hedgehog
A hedgehog is any of the spiny mammals of the subfamily Erinaceinae and the order Erinaceomorpha. There are 17 species of hedgehog in five genera, found through parts of Europe, Asia, Africa, and New Zealand . There are no hedgehogs native to Australia, and no living species native to the Americas...
s, pangolin
Pangolin
A pangolin , also scaly anteater or Trenggiling, is a mammal of the order Pholidota. There is only one extant family and one genus of pangolins, comprising eight species. There are also a number of extinct taxa. Pangolins have large keratin scales covering their skin and are the only mammals with...
s, bat
Bat
Bats are mammals of the order Chiroptera "hand" and pteron "wing") whose forelimbs form webbed wings, making them the only mammals naturally capable of true and sustained flight. By contrast, other mammals said to fly, such as flying squirrels, gliding possums, and colugos, glide rather than fly,...
s, whales, most hoofed mammals
Ungulate
Ungulates are several groups of mammals, most of which use the tips of their toes, usually hoofed, to sustain their whole body weight while moving. They make up several orders of mammals, of which six to eight survive...
, and carnivora
Carnivora
The diverse order Carnivora |Latin]] carō "flesh", + vorāre "to devour") includes over 260 species of placental mammals. Its members are formally referred to as carnivorans, while the word "carnivore" can refer to any meat-eating animal...
ns, among others.

Laurasiatheria was discovered on the basis of the similar gene sequences shared by the mammals belonging to it. No anatomical
Anatomy
Anatomy is a branch of biology and medicine that is the consideration of the structure of living things. It is a general term that includes human anatomy, animal anatomy , and plant anatomy...
features have yet been found that unite the group. Laurasiatheria is a clade
Clade
A clade is a group consisting of a species and all its descendants. In the terms of biological systematics, a clade is a single "branch" on the "tree of life". The idea that such a "natural group" of organisms should be grouped together and given a taxonomic name is central to biological...
usually discussed without a Linnaean rank
Biological classification
Biological classification, or scientific classification in biology, is a method to group and categorize organisms by biological type, such as genus or species. Biological classification is part of scientific taxonomy....
, but has been assigned the rank of cohort or magnorder, and superorder. The Laurasiatheria clade is based on DNA sequence analyses and retrotransposon
Retrotransposon
Retrotransposons are genetic elements that can amplify themselves in a genome and are ubiquitous components of the DNA of many eukaryotic organisms. They are a subclass of transposon. They are particularly abundant in plants, where they are often a principal component of nuclear DNA...
presence/absence data
Retrotransposon Marker
Retrotransposon markers are retrotransposons that are used as cladistic markers.The analysis of SINEs – Short INterspersed Elements – LINEs – Long INterspersed Elements – or truncated LTRs – Long Terminal Repeats – as molecular cladistic markers represents a particularly interesting complement to...
. The name comes from the theory that these mammals evolved on the supercontinent
Supercontinent
In geology, a supercontinent is a landmass comprising more than one continental core, or craton. The assembly of cratons and accreted terranes that form Eurasia qualifies as a supercontinent today.-History:...
of Laurasia
Laurasia
In paleogeography, Laurasia was the northernmost of two supercontinents that formed part of the Pangaea supercontinent from approximately...
, after it split from Gondwana
Gondwana
In paleogeography, Gondwana , originally Gondwanaland, was the southernmost of two supercontinents that later became parts of the Pangaea supercontinent. It existed from approximately 510 to 180 million years ago . Gondwana is believed to have sutured between ca. 570 and 510 Mya,...
when Pangaea
Pangaea
Pangaea, Pangæa, or Pangea is hypothesized as a supercontinent that existed during the Paleozoic and Mesozoic eras about 250 million years ago, before the component continents were separated into their current configuration....
broke up. It is a sister group to Euarchontoglires
Euarchontoglires
Euarchontoglires is a clade of mammals, the living members of which are rodents, lagomorphs, treeshrews, colugos and primates .-Evolutionary relationships:...
(or Supraprimates) with which it forms the clade Boreoeutheria
Boreoeutheria
Boreoeutheria is a clade of placental mammals that is composed of the sister taxa Laurasiatheria and Euarchontoglires...
. Laurasiatheria includes the following extant taxa:


There is still uncertainty regarding the phylogenetic tree
Phylogenetic tree
A phylogenetic tree or evolutionary tree is a branching diagram or "tree" showing the inferred evolutionary relationships among various biological species or other entities based upon similarities and differences in their physical and/or genetic characteristics...
for extant Laurasiatherians, primarily due to disagreement about the placement of Chiroptera and Perissodactyla. Based on morphological grounds, Chiroptera had long been classified in the superorder Archonta
Archonta
The Archonta are a group of mammals considered a superorder in some classifications.The Archonta consist of the following orders:*Primates*Plesiadapiformes *Scandentia *Dermoptera *Chiroptera...
(e.g. along with treeshrew
Treeshrew
The treeshrews are small mammals native to the tropical forests of Southeast Asia. They make up the families Tupaiidae, the treeshrews, and Ptilocercidae, the pen-tailed treeshrews, and the entire order Scandentia. There are 20 species in 5 genera...
s and the gliding colugo
Colugo
Colugos are arboreal gliding mammals found in South-east Asia. There are just two extant species, which make up the entire family Cynocephalidae and order Dermoptera. They are the most capable of all gliding mammals, using flaps of extra skin between their legs to glide from higher to lower...
s) until genetic research ruled that out and instead showed their kinship with the other Laurasiatherians. The studies conflicted in terms of the exact placement of Chiroptera however, with it being linked most closely to groups such as Eulipotyphla, Ferae or with Perissodactyla and Ferae in the Pegasoferae
Pegasoferae
Pegasoferae is a proposed clade of mammals based on genomic research in molecular systematics by Nishihara, Hasegawa and Okada .To the surprise of the authors, their data led them to propose a clade that includes bats , carnivores such as cats and dogs , horses and other odd-toed ungulates and...
proposal. The most recent study (Zhou et al., 2011) found that "trees reconstructed [...] for the 1,608-gene data set fully support [...] a basal position for Eulipotyphla and a more apical position for Chiroptera" (see cladogram
Cladogram
A cladogram is a diagram used in cladistics which shows ancestral relations between organisms, to represent the evolutionary tree of life. Although traditionally such cladograms were generated largely on the basis of morphological characters, DNA and RNA sequencing data and computational...
below) and concluded that "Pegasoferae [...] does not appear to be a natural group." The exact position of Perissodactyla remains less certain however, with some studies linking it with Ferae into a proposed clade Zooamata
Zooamata
Zooamata is a proposed clade of mammals consisting of Ferae and Perissodactyla . Together with Cetartiodactyla and chiroptera it forms Scrotifera , and is part of Laurasiatheria...
while others unite it with Cetartiodactyla into Euungulata
Euungulata
Euungulata is a proposed clade of mammals within Laurasiatheria, consisting of the following orders and their common ancestors:* Perissodactyla* Cetacea* ArtiodactylaIt is based on evidence from molecular phylogenetics...
, a clade of 'true ungulate
Ungulate
Ungulates are several groups of mammals, most of which use the tips of their toes, usually hoofed, to sustain their whole body weight while moving. They make up several orders of mammals, of which six to eight survive...
s'; Zhou et al. find better (but not full) support for the latter.
Laurasiatheria is also posited to include several extinct orders and superorders: