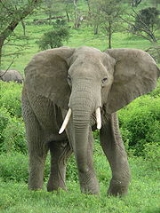 Encyclopedia
Paenungulata is a taxon
Taxon
|thumb|270px|[[African elephants]] form a widely-accepted taxon, the [[genus]] LoxodontaA taxon is a group of organisms, which a taxonomist adjudges to be a unit. Usually a taxon is given a name and a rank, although neither is a requirement...
that groups some remarkable mammal
Mammal
Mammals are members of a class of air-breathing vertebrate animals characterised by the possession of endothermy, hair, three middle ear bones, and mammary glands functional in mothers with young...
s, including three orders
Order (biology)
In scientific classification used in biology, the order is# a taxonomic rank used in the classification of organisms. Other well-known ranks are life, domain, kingdom, phylum, class, family, genus, and species, with order fitting in between class and family...
that are extant: Proboscidea
Proboscidea
Proboscidea is a taxonomic order containing one living family, Elephantidae, and several extinct families. This order was first described by J. Illiger in 1881 and encompasses the trunked mammals...
(including elephant
Elephant
Elephants are large land mammals in two extant genera of the family Elephantidae: Elephas and Loxodonta, with the third genus Mammuthus extinct...
s), Sirenia
Sirenia
Sirenia is an order of fully aquatic, herbivorous mammals that inhabit swamps, rivers, estuaries, marine wetlands, and coastal marine waters. Four species are living, in two families and genera. These are the dugong and manatees...
(sea cows, including dugong
Dugong
The dugong is a large marine mammal which, together with the manatees, is one of four living species of the order Sirenia. It is the only living representative of the once-diverse family Dugongidae; its closest modern relative, Steller's sea cow , was hunted to extinction in the 18th century...
s and manatee
Manatee
Manatees are large, fully aquatic, mostly herbivorous marine mammals sometimes known as sea cows...
s), and Hyracoidea (hyrax
Hyrax
A hyrax is any of four species of fairly small, thickset, herbivorous mammals in the order Hyracoidea. The rock hyrax Procavia capensis, the yellow-spotted rock hyrax Heterohyrax brucei, the western tree hyrax Dendrohyrax dorsalis, and the southern tree hyrax, Dendrohyrax arboreus live in Africa...
es, such as the African Rock Hyrax, Procavia habessinica). At least two more orders are known only as fossils, namely Embrithopoda
Embrithopoda
Embrithopoda is an extinct order of mammals which first appeared in the fossil record during the late Eocene and then died out during the Oligocene....
and Desmostylia
Desmostylia
Desmostylia is an extinct order of marine mammals which existed from the Arikareean age of the late Oligocene epoch to the Tortonian age of the late Miocene epoch . Their dental and skeletal form suggests desmostylians were amphibious herbivores dependent on littoral habitats...
. Both of these extinct
Extinction
In biology and ecology, extinction is the end of an organism or of a group of organisms , normally a species. The moment of extinction is generally considered to be the death of the last individual of the species, although the capacity to breed and recover may have been lost before this point...
orders were as unique in their ways as the surviving orders. Embrithopods were rhinoceros
Rhinoceros
Rhinoceros , also known as rhino, is a group of five extant species of odd-toed ungulates in the family Rhinocerotidae. Two of these species are native to Africa and three to southern Asia....
-like herbivorous mammals with plantigrade
Plantigrade
right|151px|thumb|Human skeleton, showing plantigrade habitIn terrestrial animals, plantigrade locomotion means walking with the podials and metatarsals flat on the ground. It is one of three forms of locomotion adopted by mammals...
feet, and desmostylians were hippopotamus
Hippopotamus
The hippopotamus , or hippo, from the ancient Greek for "river horse" , is a large, mostly herbivorous mammal in sub-Saharan Africa, and one of only two extant species in the family Hippopotamidae After the elephant and rhinoceros, the hippopotamus is the third largest land mammal and the heaviest...
-like amphibious animals. Their walking posture and diet have been the subject of speculation, but tooth wear indicates that desmostylians browsed on terrestrial plants and had a posture similar to other large hoofed mammals.

Of the five orders, hyraxes are the most basal, followed by embrithopods; the remaining orders sirenians, desmostylians and elephants are more closely interrelated. These latter three are grouped as the Tethytheria, because it is believed that their common ancestors lived on the shores of the prehistoric Tethys Sea.

Although morphological evidence continues to support the position of paenungulates with the ungulates, the molecular evidence suggests that Paenungulata is part of the cohort Afrotheria
Afrotheria
Afrotheria is a clade of mammals, the living members of which belong to groups from Africa or of African origin: golden moles, sengis , tenrecs, aardvarks, hyraxes, elephants and sea cows. The common ancestry of these animals was not recognized until the late 1990s...
, an ancient assemblage of mainly Africa
Africa
Africa is the world's second largest and second most populous continent, after Asia. At about 30.2 million km² including adjacent islands, it covers 6% of the Earth's total surface area and 20.4% of the total land area...
n mammals of great diversity. The other members of this cohort are the orders Afrosoricida
Afrosoricida
The order Afrosoricida contains the golden moles of southern Africa and the tenrecs of Madagascar and Africa, two families of small mammals that have traditionally been considered to be a part of the order Insectivora.Some biologists use Tenrecomorpha as the name for the tenrec-golden mole clade,...
(tenrecs and golden mole
Golden mole
Golden moles are small, insectivorous burrowing mammals native to southern Africa. They form the family Chrysochloridae, and are taxonomically distinct from the true moles which they resemble due to convergence...
s), Macroscelidea (elephant shrew
Elephant shrew
Elephant shrews or jumping shrews are small insectivorous mammals native to Africa, belonging to the family Macroscelididae, in the order Macroscelidea...
s) and Tubulidentata (aardvark
Aardvark
The aardvark is a medium-sized, burrowing, nocturnal mammal native to Africa...
s).

George Gaylord Simpson
George Gaylord Simpson
George Gaylord Simpson was an American paleontologist. Simpson was perhaps the most influential paleontologist of the twentieth century, and a major participant in the modern evolutionary synthesis, contributing Tempo and mode in evolution , The meaning of evolution and The major features of...
, using traditional taxonomic techniques
Taxonomy
Taxonomy is the science of identifying and naming species, and arranging them into a classification. The field of taxonomy, sometimes referred to as "biological taxonomy", revolves around the description and use of taxonomic units, known as taxa...
, in 1945 succeeded in grouping these spectacularly diverse mammals in the superorder he named Paenungulata ("almost ungulate
Ungulate
Ungulates are several groups of mammals, most of which use the tips of their toes, usually hoofed, to sustain their whole body weight while moving. They make up several orders of mammals, of which six to eight survive...
s"). But there were many loose threads in unravelling their genealogy. For example, hyraxes in his Paenungulata had some characteristics suggesting they might be connected to the odd-toed ungulates (Perissodactyla, such as horses and rhinos). Indeed, early taxonomists placed the Hyracoidea closest to the rhinoceroses, because of their dentition, and even some recent evidence suggested a possible affinity of Hyracoidea to Perissodactyla rather than to the rest of the Paenungulata. This would mean that paenungulates are not a clade
Clade
A clade is a group consisting of a species and all its descendants. In the terms of biological systematics, a clade is a single "branch" on the "tree of life". The idea that such a "natural group" of organisms should be grouped together and given a taxonomic name is central to biological...
.

Later, genetic techniques were developed for inspecting amino acid
Amino acid
Amino acids are molecules containing an amine group, a carboxylic acid group and a side-chain that varies between different amino acids. The key elements of an amino acid are carbon, hydrogen, oxygen, and nitrogen...
differences among haemoglobin sequences. The most parsimonious cladogram
Cladogram
A cladogram is a diagram used in cladistics which shows ancestral relations between organisms, to represent the evolutionary tree of life. Although traditionally such cladograms were generated largely on the basis of morphological characters, DNA and RNA sequencing data and computational...
s depicted Simpson's Paenungulata as an authentic clade
Clade
A clade is a group consisting of a species and all its descendants. In the terms of biological systematics, a clade is a single "branch" on the "tree of life". The idea that such a "natural group" of organisms should be grouped together and given a taxonomic name is central to biological...
and as one of the first groups to diversify from the basal placental mammals (Eutheria
Eutheria
Eutheria is a group of mammals consisting of placental mammals plus all extinct mammals that are more closely related to living placentals than to living marsupials . They are distinguished from noneutherians by various features of the feet, ankles, jaws and teeth...
). The amino acid sequences do not support a connection with perissodactyls (odd-toed ungulates).