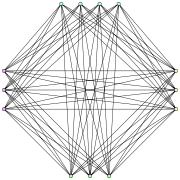 In graph theory
Graph theory
In mathematics and computer science, graph theory is the study of graphs, mathematical structures used to model pairwise relations between objects from a certain collection. A "graph" in this context refers to a collection of vertices or 'nodes' and a collection of edges that connect pairs of...
, a cograph, or complement-reducible graph, or P4-free graph, is a graph
Graph (mathematics)
In mathematics, a graph is an abstract representation of a set of objects where some pairs of the objects are connected by links. The interconnected objects are represented by mathematical abstractions called vertices, and the links that connect some pairs of vertices are called edges...
that can be generated from the single-vertex graph K1 by complementation
Complement graph
In graph theory, the complement or inverse of a graph G is a graph H on the same vertices such that two vertices of H are adjacent if and only if they are not adjacent in G. That is, to generate the complement of a graph, one fills in all the missing edges required to form a complete graph, and...
and disjoint union
Graph operations
Operations on graphs produce new graphs from old ones. They may be separated into the following major categories.-Elementary operations:These are sometimes called "editing operations" on graphs...
. That is, the family of cographs is the smallest class of graphs that includes K1 and is closed under complementation and disjoint union.

Cographs have been discovered independently by several authors since the 1970s; early references include , , , and . They have also been called D*-graphs , hereditary Dacey graphs , and 2-parity graphs .

See, e.g., for more detailed coverage of cographs, including the facts presented here.

Any cograph may be constructed using the following rules:

Several alternative characterizations of cographs can be given. Among them:


All complete graph
Complete graph
In the mathematical field of graph theory, a complete graph is a simple undirected graph in which every pair of distinct vertices is connected by a unique edge.-Properties:...
s, complete bipartite graph
Complete bipartite graph
In the mathematical field of graph theory, a complete bipartite graph or biclique is a special kind of bipartite graph where every vertex of the first set is connected to every vertex of the second set.- Definition :...
s, threshold graph
Threshold graph
In graph theory, a threshold graph is a graph that can be constructed from a one-vertex graph by repeated applications of the following two operations:#Addition of a single isolated vertex to the graph....
s, and Turán graph
Turán graph
The Turán graph T is a graph formed by partitioning a set of n vertices into r subsets, with sizes as equal as possible, and connecting two vertices by an edge whenever they belong to different subsets. The graph will have subsets of size \lceil n/r\rceil, and r- subsets of size \lfloor n/r\rfloor...
s are cographs. Every cograph is distance-hereditary, a comparability graph
Comparability graph
In graph theory, a comparability graph is an undirected graph that connects pairs of elements that are comparable to each other in a partial order...
, and perfect
Perfect graph
In graph theory, a perfect graph is a graph in which the chromatic number of every induced subgraph equals the size of the largest clique of that subgraph....
.

A cotree is a tree in which the internal nodes are labeled with the numbers 0 and 1. Every cotree T defines a cograph G having the leaves of T as vertices, and in which the subtree rooted at each node of T corresponds to the induced subgraph in G defined by the set of leaves descending from that node:
An equivalent way of describing the cograph formed from a cotree is that two vertices are connected by an edge if and only if the lowest common ancestor
Lowest common ancestor
The lowest common ancestor is a concept in graph theory and computer science. Let T be a rooted tree with n nodes. The lowest common ancestor is defined between two nodes v and w as the lowest node in T that has both v and w as descendants .The LCA of v and w in T is the shared ancestor of v...
of the corresponding leaves is labeled by 1. Conversely, every cograph can be represented in this way by a cotree. If we require the labels on any root-leaf path of this tree to alternate between 0 and 1, this representation is unique .

For instance, to find the maximum clique
Clique problem
In computer science, the clique problem refers to any of the problems related to finding particular complete subgraphs in a graph, i.e., sets of elements where each pair of elements is connected....
in a cograph, compute in bottom-up order the maximum clique in each subgraph represented by a subtree of the cotree. For a node labeled 0, the maximum clique is the maximum among the cliques computed for that node's children. For a node labeled 1, the maximum clique is the union of the cliques computed for that node's children, and has size equal to the sum of the children's clique sizes. Thus, by alternately maximizing and summing values stored at each node of the cotree, we may compute the maximum clique size, and by alternately maximizing and taking unions, we may construct the maximum clique itself. Similar bottom-up tree computations allow the maximum independent set
Maximal independent set
In graph theory, a maximal independent set or maximal stable set is an independent set that is not a subset of any other independent set. That is, it is a set S such that every edge of the graph has at least one endpoint not in S and every vertex not in S has at least one neighbor in S...
, vertex coloring number
Graph coloring
In graph theory, graph coloring is a special case of graph labeling; it is an assignment of labels traditionally called "colors" to elements of a graph subject to certain constraints. In its simplest form, it is a way of coloring the vertices of a graph such that no two adjacent vertices share the...
, maximum clique cover, and Hamiltonicity (that is the existence of a Hamiltonian cycle
Hamiltonian path problem
In the mathematical field of graph theory the Hamiltonian path problem and the Hamiltonian cycle problem are problems of determining whether a Hamiltonian path or a Hamiltonian cycle exists in a given graph . Both problems are NP-complete...
) to be computed in linear time from a cotree representation of a cograph. One can also use cotrees to determine in linear time whether two cographs are isomorphic
Graph isomorphism
In graph theory, an isomorphism of graphs G and H is a bijection between the vertex sets of G and H f \colon V \to V \,\!such that any two vertices u and v of G are adjacent in G if and only if ƒ and ƒ are adjacent in H...
.
The source of this article is wikipedia, the free encyclopedia.  The text of this article is licensed under the GFDL.