Encyclopedia
In graph theory
Graph theory
In mathematics and computer science, graph theory is the study of graphs, mathematical structures used to model pairwise relations between objects from a certain collection. A "graph" in this context refers to a collection of vertices or 'nodes' and a collection of edges that connect pairs of...
, a path in a graph
Graph (mathematics)
In mathematics, a graph is an abstract representation of a set of objects where some pairs of the objects are connected by links. The interconnected objects are represented by mathematical abstractions called vertices, and the links that connect some pairs of vertices are called edges...
is a sequence
Sequence
In mathematics, a sequence is an ordered list of objects . Like a set, it contains members , and the number of terms is called the length of the sequence. Unlike a set, order matters, and exactly the same elements can appear multiple times at different positions in the sequence...
of vertices
Vertex (graph theory)
In graph theory, a vertex or node is the fundamental unit out of which graphs are formed: an undirected graph consists of a set of vertices and a set of edges , while a directed graph consists of a set of vertices and a set of arcs...
such that from each of its vertices there is an edge to the next vertex in the sequence. A path may be infinite, but a finite path always has a first vertex, called its start vertex, and a last vertex, called its end vertex. Both of them are called terminal vertices of the path. The other vertices in the path are internal vertices. A cycle
Cycle (graph theory)
In graph theory, the term cycle may refer to a closed path. If repeated vertices are allowed, it is more often called a closed walk. If the path is a simple path, with no repeated vertices or edges other than the starting and ending vertices, it may also be called a simple cycle, circuit, circle,...
is a path such that the start vertex and end vertex are the same. The choice of the start vertex in a cycle is arbitrary. 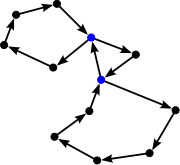 A path with no repeated vertices is called a simple path, and a cycle with no repeated vertices or edges aside from the necessary repetition of the start and end vertex is a simple cycle. In modern graph theory
Graph theory
In mathematics and computer science, graph theory is the study of graphs, mathematical structures used to model pairwise relations between objects from a certain collection. A "graph" in this context refers to a collection of vertices or 'nodes' and a collection of edges that connect pairs of...
, most often "simple" is implied; i.e., "cycle" means "simple cycle" and "path" means "simple path", but this convention is not always observed, especially in applied graph theory. Some authors (e.g. Bondy and Murty 1976) use the term "walk" for a path in which vertices or edges may be repeated, and reserve the term "path" for what is here called a simple path.

A simple cycle that includes every vertex, without repetition, of the graph is known as a Hamiltonian cycle.

The length of a path is the number of edges that the path uses, counting multiple edges multiple times. The length can be zero for the case of a single vertex.

A weighted graph associates a value (weight) with every edge in the graph. The weight of a path in a weighted graph is the sum of the weights of the traversed edges. Sometimes the words cost or length are used instead of weight.