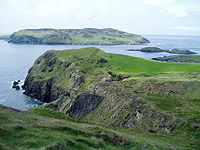 Calf of Man, sometimes known as the Calf of Mann , is a 618 acres (250.1 ha) island (almost 1 square mile), off the southwest coast of the Isle of Man
Isle of Man
The Isle of Man , otherwise known simply as Mann , is a self-governing British Crown Dependency, located in the Irish Sea between the islands of Great Britain and Ireland, within the British Isles. The head of state is Queen Elizabeth II, who holds the title of Lord of Mann. The Lord of Mann is...
. It is separated from the Isle of Man by a narrow stretch of water called the Calf Sound
Calf Sound
Calf Sound is a body of water which separates the Calf of Man island from the mainland of the Isle of Man. The sound - technically a strait - is about 700 yards in width, and contains the small islet of Kitterland .A visitor centre overlooking the Calf Sound holds multimedia exhibits giving...
. Like the nearby rocky islets of Chicken Rock
Chicken Rock
Chicken Rock is the southernmost island administered by the Isle of Man and belongs to the parish of Rushen. It lies to the southwest of the Calf of Man south-west of Spanish Head on the Manx mainland ....
and Kitterland
Kitterland
Kitterland is an islet in the Calf Sound between the Isle of Man and the Calf of Man in the Irish Sea.Kitterland is currently owned by the Manx National Trust and has a wealth of bird and marine wildlife. Kitterland is uninhabited and is in the parish of Rushen...
, it is part of the parish of Rushen
Rushen
Rushen , formerly Kirk Christ Rushen , is a parish in the sheading of the same name in the Isle of Man. The parish is a fishing and agricultural district at the south-westernmost point of the island. The parish is one of three in the sheading of Rushen...
. It has two seasonal inhabitants. The word 'calf' derives from the Old Norse
Old Norse
Old Norse is a North Germanic language that was spoken by inhabitants of Scandinavia and inhabitants of their overseas settlements during the Viking Age, until about 1300....
word kalfr which means a small island lying near a larger one. It is possible to reach the Calf of Man by boat from both Port Erin and Port St Mary. Cow Harbour and South Harbour are the main landing places. The highest part of the island is to the west where an unnamed peak reaches 415 feet (128 metres) above sea level
Sea level
Mean sea level is a measure of the average height of the ocean's surface ; used as a standard in reckoning land elevation...
.

The Calf of Man currently boasts the world's highest density of lighthouses: two lighthouses were built in 1818 by Robert Stevenson
Robert Stevenson (civil engineer)
Robert Stevenson FRSE MInstCE FSAS MWS FGS FRAS FSA was a Scottish civil engineer and famed designer and builder of lighthouses.One of his finest achievements was the construction of the Bell Rock Lighthouse.-Early life:...
to warn mariners of the hazards of the Chicken Rock
Chicken Rock
Chicken Rock is the southernmost island administered by the Isle of Man and belongs to the parish of Rushen. It lies to the southwest of the Calf of Man south-west of Spanish Head on the Manx mainland ....
s off the south end of the Calf. These were replaced in 1875 by a lighthouse built on the Chicken Rocks themselves. In 1968, a third lighthouse was built on the Calf after a severe fire destroyed the Chicken Rocks light. The Chicken Rocks lighthouse was later rebuilt. There are two minor, unfenced roads on the island and two very short streams.

Calf of Man is home to a breeding population of Manx Shearwater
Manx Shearwater
The Manx Shearwater is a medium-sized shearwater in the seabird family Procellariidae. The scientific name of this species records a name shift: Manx Shearwaters were called Manks Puffins in the 17th century. Puffin is an Anglo-Norman word for the cured carcasses of nestling shearwaters...
s, a seabird which derives its name from its presence in Manx waters.