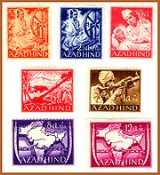 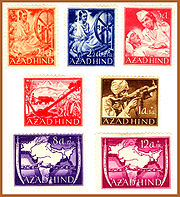 The Azad Hind Stamps are a set of Cinderella stamp
Cinderella stamp
In philately, a cinderella stamp has been defined as "Virtually anything resembling a postage stamp, but not issued for postal purposes by a government postal administration..." The term also excludes imprinted stamps on postal stationery.- Types :...
s in six different designs produced in 1943 in Nazi Germany
Nazi Germany
Nazi Germany , also known as the Third Reich , but officially called German Reich from 1933 to 1943 and Greater German Reich from 26 June 1943 onward, is the name commonly used to refer to the state of Germany from 1933 to 1945, when it was a totalitarian dictatorship ruled by...
for Subhas Chandra Bose's Azad Hind (Indian National Army
Indian National Army
The Indian National Army or Azad Hind Fauj was an armed force formed by Indian nationalists in 1942 in Southeast Asia during World War II. The aim of the army was to overthrow the British Raj in colonial India, with Japanese assistance...
). The Indian Postal Department includes these six unused Azad Hind Stamps in its commemorative book India's Freedom Struggle through India Postage Stamps.

A concept of Subhas Chandra Bose, the stamps were designed by Werner and Maria von Axster-Heudtlass who created many German issues between 1925 and 1949, and show themes depicted on ten denominations.

All stamps were printed by photogravure
Photogravure
Photogravure is an intaglio printmaking or photo-mechanical process whereby a copper plate is coated with a light-sensitive gelatin tissue which had been exposed to a film positive, and then etched, resulting in a high quality intaglio print that can reproduce the detail and continuous tones of a...
in sheets of 100 at the "Reichsdruckerei", the Government Printing Bureau in Berlin
Berlin
Berlin is the capital city of Germany and is one of the 16 states of Germany. With a population of 3.45 million people, Berlin is Germany's largest city. It is the second most populous city proper and the seventh most populous urban area in the European Union...
. A million copies of the lower denominations were produced, with a further half million of the higher values, except for the 1 + 2 Rupee stamp, of which only 13,500 were printed in three color varieties.

Each value was printed in a different color. The 1 + 2 Rupee stamp was designed as a multi-color design.

The German Michel catalog lists the seven semipostal
Semipostal
A semi-postal stamp or semipostal stamp, also known as a charity stamp, is a postage stamp issued to raise money for a particular purpose and sold at a premium over the postal value...
s first (Mi. I-VII); the surcharge was for the administration
Invasion and Occupation of the Andaman Islands during World War II
The Japanese occupation of the Andaman Islands occurred in 1942 during World War II. The Andaman and Nicobar Islands , are a group of islands situated in the Bay of Bengal at about 780 miles from Kolkata, 740 miles from Chennai and 120 miles from Cape Nargis in Burma...
of Andaman
Andaman Islands
The Andaman Islands are a group of Indian Ocean archipelagic islands in the Bay of Bengal between India to the west, and Burma , to the north and east...
and Nicobar Islands
Nicobar Islands
The Nicobar Islands are an archipelagic island chain in the eastern Indian Ocean...
then under Japan
Japan
Japan is an island nation in East Asia. Located in the Pacific Ocean, it lies to the east of the Sea of Japan, China, North Korea, South Korea and Russia, stretching from the Sea of Okhotsk in the north to the East China Sea and Taiwan in the south...
ese control. Next come the three regular postal issues with no surcharge (Mi. VIII-X). A set of 21 stamps currently exist, both perforated (10 mm × 12 mm) and unperforated.