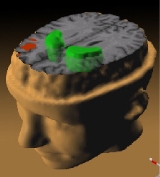 Overview
Schizophrenia is a mental disorder characterized by a disintegration of thought processes and of emotional responsiveness. It most commonly manifests itself as auditory hallucination
Auditory hallucination
An auditory hallucination, or paracusia, is a form of hallucination that involves perceiving sounds without auditory stimulus. A common form involves hearing one or more talking voices...
s, paranoid
Paranoia
Paranoia [] is a thought process believed to be heavily influenced by anxiety or fear, often to the point of irrationality and delusion. Paranoid thinking typically includes persecutory beliefs, or beliefs of conspiracy concerning a perceived threat towards oneself...
or bizarre delusion
Delusion
A delusion is a false belief held with absolute conviction despite superior evidence. Unlike hallucinations, delusions are always pathological...
s, or disorganized speech and thinking
Thought disorder
In psychiatry, thought disorder or formal thought disorder is a term used to describe incomprehensible language, either speech or writing, that is presumed to reflect thinking. There are different types...
, and it is accompanied by significant social or occupational dysfunction. The onset of symptoms typically occurs in young adulthood, with a global lifetime prevalence
Prevalence
In epidemiology, the prevalence of a health-related state in a statistical population is defined as the total number of cases of the risk factor in the population at a given time, or the total number of cases in the population, divided by the number of individuals in the population...
of about 0.3–0.7%. Diagnosis is based on observed behavior and the patient's reported experiences.
Genetics
Genetics
Genetics , a discipline of biology, is the science of genes, heredity, and variation in living organisms....
, early environment, neurobiology, and psychological
Psychology
Psychology is the study of the mind and behavior. Its immediate goal is to understand individuals and groups by both establishing general principles and researching specific cases. For many, the ultimate goal of psychology is to benefit society...
and social processes appear to be important contributory factors; some recreational and prescription drugs appear to cause or worsen symptoms. Current research is focused on the role of neurobiology, although no single isolated organic cause has been found.

What is the best treatment for schizophrenia? Is there a cure?

Dear Sirs, I have a 27 yr old son who is either schizophrenic or schizo-affective, depending on which doctor you speak to. He was diagnosed with me...
More

Is or has psychosurgery used for treatment of schizophrenia?

How was the condition found out?

What percentage of people are affected by it usually?

Are there any discovered supposed causes

Do you have a family member with a diagnosis of schizophrenia?
More
x