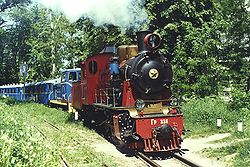 A children's railway is an extracurricular educational institution, where teenagers learn railway
Rail transport
Rail transport is a means of conveyance of passengers and goods by way of wheeled vehicles running on rail tracks. In contrast to road transport, where vehicles merely run on a prepared surface, rail vehicles are also directionally guided by the tracks they run on...
professions. This phenomenon originated in the USSR
Soviet Union
The Soviet Union , officially the Union of Soviet Socialist Republics , was a constitutionally socialist state that existed in Eurasia between 1922 and 1991....
and was greatly developed in Soviet times. The world's first children's railway was opened Moscow
Moscow
Moscow is the capital, the most populous city, and the most populous federal subject of Russia. The city is a major political, economic, cultural, scientific, religious, financial, educational, and transportation centre of Russia and the continent...
, in Gorky Park
Gorky Park (Moscow)
Gorky Central Park of Culture and Leisure is an amusement park in Moscow, named after Maxim Gorky.-History:...
in 1932. At the breakup of the USSR, 52 children's railways existed in the country.

Many children's railways are still functioning in post-Soviet states and Eastern European countries. Examples include a children's railway in Minsk, one in Yaroslavl
Yaroslavl
Yaroslavl is a city and the administrative center of Yaroslavl Oblast, Russia, located northeast of Moscow. The historical part of the city, a World Heritage Site, is located at the confluence of the Volga and the Kotorosl Rivers. It is one of the Golden Ring cities, a group of historic cities...
and many other cities.

There are children's railways situated in following cities: