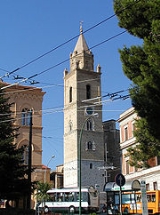 Encyclopedia
Chieti ˈkjeːti is a city and comune
Comune
In Italy, the comune is the basic administrative division, and may be properly approximated in casual speech by the English word township or municipality.-Importance and function:...
in Central Italy
Central Italy
Central Italy is one of the five official statistical regions of Italy used by the National Institute of Statistics , a first level NUTS region and a European Parliament constituency...
, 200 km northeast of Rome
Rome
Rome is the capital of Italy and the country's largest and most populated city and comune, with over 2.7 million residents in . The city is located in the central-western portion of the Italian Peninsula, on the Tiber River within the Lazio region of Italy.Rome's history spans two and a half...
. It is the capital of the Province of Chieti
Province of Chieti
The Province of Chieti is a province in the Abruzzo region of Italy. Its capital is the city of Chieti.It has an area of 2,588 km², and a total population of 381,993...
in the Abruzzo region
Abruzzo
Abruzzo is a region in Italy, its western border lying less than due east of Rome. Abruzzo borders the region of Marche to the north, Lazio to the west and south-west, Molise to the south-east, and the Adriatic Sea to the east...
. Chieti lies on a crest along the Pescara River a few kilometres away from the Adriatic Sea
Adriatic Sea
The Adriatic Sea is a body of water separating the Italian Peninsula from the Balkan peninsula, and the system of the Apennine Mountains from that of the Dinaric Alps and adjacent ranges...
, and with the Maiella and Gran Sasso
Gran Sasso
Gran Sasso d'Italia is a mountain located in the Abruzzo region of central Italy. The Gran Sasso forms the centerpiece of the Gran Sasso e Monti della Laga National Park which was established in 1993 and holds the highest mountains in continental Italy south of the Alps and is part of the...
mountains in the background.

As Theate Marrucinorum, Chieti was the chief town of the warlike Marrucini
Marrucini
The Marrucini were an ancient tribe which occupied a small strip of territory around the ancient Teate , on the east coast of Abruzzo, Italy, limited by the Aterno and Foro Rivers...
. According to Strabo
Strabo
Strabo, also written Strabon was a Greek historian, geographer and philosopher.-Life:Strabo was born to an affluent family from Amaseia in Pontus , a city which he said was situated the approximate equivalent of 75 km from the Black Sea...
, it was founded by the Arcadia
Arcadia
Arcadia is one of the regional units of Greece. It is part of the administrative region of Peloponnese. It is situated in the central and eastern part of the Peloponnese peninsula. It takes its name from the mythological character Arcas. In Greek mythology, it was the home of the god Pan...
ns as Tegeate.

After their defeat against the Romans
Ancient Rome
Ancient Rome was a thriving civilization that grew on the Italian Peninsula as early as the 8th century BC. Located along the Mediterranean Sea and centered on the city of Rome, it expanded to one of the largest empires in the ancient world....
, the Marrucini became their loyal allies and later their territory was placed under Roman municipal jurisdiction after the Social War. In imperial times Chieti reached up to 60,000 inhabitants but, after the fall of the Western Roman Empire
Western Roman Empire
The Western Roman Empire was the western half of the Roman Empire after its division by Diocletian in 285; the other half of the Roman Empire was the Eastern Roman Empire, commonly referred to today as the Byzantine Empire....
, it was destroyed by Visigoths and Heruli
Heruli
The Heruli were an East Germanic tribe who are famous for their naval exploits. Migrating from Northern Europe to the Black Sea in the third century They were part of the...
. Later it was seat of a gastald
Gastald
A gastald was a Lombard official in charge of some portion of the royal demesne with civil, martial, and judicial powers. By the Edictum Rothari of 643, the gastalds were given the civil authority in the cities and the reeves the like authority in the countryside...
ate under the Lombard
Lombards
The Lombards , also referred to as Longobards, were a Germanic tribe of Scandinavian origin, who from 568 to 774 ruled a Kingdom in Italy...
kings. After its destruction by Peppin, it became a fief of the Duchy of Benevento
Duchy of Benevento
The Duchy and later Principality of Benevento was the southernmost Lombard duchy in medieval Italy, centred on Benevento, a city central in the Mezzogiorno. Owing to the Ducatus Romanus of the popes, which cut it off from the rest of Lombard Italy, Benevento was from the first practically...
.

Chieti recovered some political and economic importance under the Norman rule of Southern Italy, a role it kept also under the Hohenstaufen, Angevine
Capetian House of Anjou
The Capetian House of Anjou, also known as the House of Anjou-Sicily and House of Anjou-Naples, was a royal house and cadet branch of the direct House of Capet. Founded by Charles I of Sicily, a son of Louis VIII of France, the Capetian king first ruled the Kingdom of Sicily during the 13th century...
and Aragonese
House of Aragon
The House of Aragon is the name given several royal houses that ruled the County, the Kingdom or the Crown of Aragon.Some historiansGuillermo Fatás y Guillermo Redondo, Alberto Montaner Frutos, Faustino Menéndez Pidal de Navascués...
rules. After a cultural and architectonical flourishment during the 17th century, under the aegis of the Counter-Reformation
Counter-Reformation
The Counter-Reformation was the period of Catholic revival beginning with the Council of Trent and ending at the close of the Thirty Years' War, 1648 as a response to the Protestant Reformation.The Counter-Reformation was a comprehensive effort, composed of four major elements:#Ecclesiastical or...
, Chieti was again shattered by plague in 1656. In the 18th century it received several new academies and schools which further increased the city's artistical heritage. In 1806 Chieti was turned into a fortress by the French
France
The French Republic , The French Republic , The French Republic , (commonly known as France , is a unitary semi-presidential republic in Western Europe with several overseas territories and islands located on other continents and in the Indian, Pacific, and Atlantic oceans. Metropolitan France...
. It became part of the newly-created Kingdom of Italy in 1860.

During World War II
World War II
World War II, or the Second World War , was a global conflict lasting from 1939 to 1945, involving most of the world's nations—including all of the great powers—eventually forming two opposing military alliances: the Allies and the Axis...
, Chieti, as it was not bombed because it was declared an open city
Open city
In war, in the event of the imminent capture of a city, the government/military structure of the nation that controls the city will sometimes declare it an open city, thus announcing that they have abandoned all defensive efforts....
(like Rome
Rome
Rome is the capital of Italy and the country's largest and most populated city and comune, with over 2.7 million residents in . The city is located in the central-western portion of the Italian Peninsula, on the Tiber River within the Lazio region of Italy.Rome's history spans two and a half...
), welcomed many refugees from the near towns and villages. Allied forces liberated the city on June 9, 1944, one day after the Germans
German Army
The German Army is the land component of the armed forces of the Federal Republic of Germany. Following the disbanding of the Wehrmacht after World War II, it was re-established in 1955 as the Bundesheer, part of the newly formed West German Bundeswehr along with the Navy and the Air Force...
left the city. 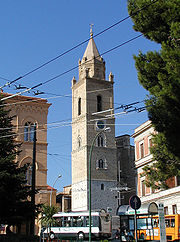 Under the church of SS. Pietro e Paolo and the adjoining houses are extensive substructures (in opus reticulatum
Opus reticulatum
Opus reticulatum is a form of brickwork used in ancient Roman architecture. It consists of diamond-shaped bricks of tuff placed around a core of opus caementicium...
and brickwork) of the 1st century CE, belonging to a building erected by M. Vectius Marcellus (probably mentioned by Pliny
Pliny the Elder
Gaius Plinius Secundus , better known as Pliny the Elder, was a Roman author, naturalist, and natural philosopher, as well as naval and army commander of the early Roman Empire, and personal friend of the emperor Vespasian...
, H.N., II., 199) and Helvidia Priscilla. There are also remains of large reservoirs and of an ancient theatre. New excavations are currently under way on the site of the former Campo Sportivo.

The University of Chieti
University of Chieti
The G. d'Annunzio University is a university located in Chieti and Pescara, Italy. It was founded in 1960 and is organized in 11 Faculties. Student enrollment at the University is currently in excess of 23,000.-History:...
(Università G. d'Annunzio - Chieti e Pescara) is based in Chieti and Pescara
Pescara
Pescara is the capital city of the Province of Pescara, in the Abruzzo region of Italy. As of January 1, 2007 it was the most populated city within Abruzzo at 123,059 residents, 400,000 with the surrounding metropolitan area...
and hosts about 35,000 students, covering areas of Architecture, Arts and Philosophy, Economics, Foreign Languages and Literatures, Management, Medicine, Pharmacy, Psychology, Sciences, Social Sciences and Sports Medicine.