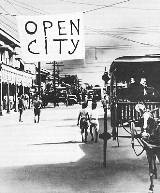 In war
War
War is a state of organized, armed, and often prolonged conflict carried on between states, nations, or other parties typified by extreme aggression, social disruption, and usually high mortality. War should be understood as an actual, intentional and widespread armed conflict between political...
, in the event of the imminent capture of a city
City
A city is a relatively large and permanent settlement. Although there is no agreement on how a city is distinguished from a town within general English language meanings, many cities have a particular administrative, legal, or historical status based on local law.For example, in the U.S...
, the government
Government
Government refers to the legislators, administrators, and arbitrators in the administrative bureaucracy who control a state at a given time, and to the system of government by which they are organized...
/military
Military
A military is an organization authorized by its greater society to use lethal force, usually including use of weapons, in defending its country by combating actual or perceived threats. The military may have additional functions of use to its greater society, such as advancing a political agenda e.g...
structure of the nation
Nation
A nation may refer to a community of people who share a common language, culture, ethnicity, descent, and/or history. In this definition, a nation has no physical borders. However, it can also refer to people who share a common territory and government irrespective of their ethnic make-up...
that controls the city will sometimes declare it an open city, thus announcing that they have abandoned all defensive efforts.

The attacking armies
Army
An army An army An army (from Latin arma "arms, weapons" via Old French armée, "armed" (feminine), in the broadest sense, is the land-based military of a nation or state. It may also include other branches of the military such as the air force via means of aviation corps...
of the opposing military will then be expected not to bomb
Aerial bombing of cities
A species of strategic bombing, the aerial bombing of cities began in 1915 during World War I, grew to a vast scale in World War II, and continues to the present day. The development of aerial bombardment marked an increased capacity of armed forces to deliver explosive weapons in populated areas...
or otherwise attack the city, but simply to march in. The concept aims at protecting the historic landmarks and civilian
Civilian
A civilian under international humanitarian law is a person who is not a member of his or her country's armed forces or other militia. Civilians are distinct from combatants. They are afforded a degree of legal protection from the effects of war and military occupation...
s who dwell in the city from an unnecessary battle.

Attacking forces do not always respect the declaration of an "open city." Defensive forces will use it as a political tactic as well.