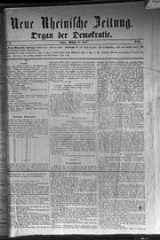 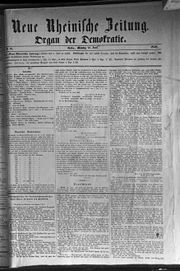 The Neue Rheinische Zeitung - Organ der Demokratie ("New Rhenish Newspaper - Organ of Democracy") was a German
Germany
Germany , officially the Federal Republic of Germany , is a federal parliamentary republic in Europe. The country consists of 16 states while the capital and largest city is Berlin. Germany covers an area of 357,021 km2 and has a largely temperate seasonal climate...
daily newspaper
Newspaper
A newspaper is a scheduled publication containing news of current events, informative articles, diverse features and advertising. It usually is printed on relatively inexpensive, low-grade paper such as newsprint. By 2007, there were 6580 daily newspapers in the world selling 395 million copies a...
, published by Karl Marx
Karl Marx
Karl Heinrich Marx was a German philosopher, economist, sociologist, historian, journalist, and revolutionary socialist. His ideas played a significant role in the development of social science and the socialist political movement...
in Cologne
Cologne
Cologne is Germany's fourth-largest city , and is the largest city both in the Germany Federal State of North Rhine-Westphalia and within the Rhine-Ruhr Metropolitan Area, one of the major European metropolitan areas with more than ten million inhabitants.Cologne is located on both sides of the...
between June 1, 1848 and May 19, 1849. Its name refers to a paper earlier edited by Marx, the Rheinische Zeitung
Rheinische Zeitung
The Rheinische Zeitung was a 19th-century German newspaper, edited most famously by Karl Marx.The paper was founded on January 1, 1842 with a reformist pro-democracy editorial slant, providing an outlet for the Rhine region's middle-class and intellectuals, who were increasingly opposed to...
. Joseph Weydemeyer
Joseph Weydemeyer
Joseph Arnold Weydemeyer was a military officer in the Kingdom of Prussia and the United States, as well as a journalist, politician and Marxist revolutionary....
, also a member of the Communist League
Communist League
The Communist League was the first Marxist international organization. It was founded originally as the League of the Just by German workers in Paris in 1834. This was initially a utopian socialist and Christian communist group devoted to the ideas of Gracchus Babeuf...
, was one of its editors.

The NRZ was a target of government suppression
Censorship
thumb|[[Book burning]] following the [[1973 Chilean coup d'état|1973 coup]] that installed the [[Military government of Chile |Pinochet regime]] in Chile...
, which eventually led to its ceasing publication. On 2 March 1849, Prussian soldiers came to Marx's home to arrest one of the writers. Marx refused to turn over the writer, and the soldiers eventually left. On 9 May 1849, Marx was ordered to leave the country within 24 hours, as his documents for legal residency had expired. http://revcom.us/a/v19/930-39/936/manifest.htm

Due to the threat of arrest or exile of its writers, and in the face of continued government suppression, the NRZ published its last issue on 18 May 1849. This was called the "red issue" as it was printed entirely in red ink. Marx's closing statement mocked the governments against which he had railed:
The Neue Rheinische Zeitung was revived in 2005 as an online newspaper.