Encyclopedia
The Battle of Novara or Battle of Bicocca (Bicocca is a borough of Novara
Novara
Novara is the capital city of the province of Novara in the Piedmont region in northwest Italy, to the west of Milan. With c. 105,000 inhabitants, it is the second most populous city in Piedmont after Turin. It is an important crossroads for commercial traffic along the routes from Milan to Turin...
) was one of the battles fought between the Austrian Empire
Austrian Empire
The Austrian Empire was a modern era successor empire, which was centered on what is today's Austria and which officially lasted from 1804 to 1867. It was followed by the Empire of Austria-Hungary, whose proclamation was a diplomatic move that elevated Hungary's status within the Austrian Empire...
and the Kingdom of Sardinia
Kingdom of Sardinia
The Kingdom of Sardinia consisted of the island of Sardinia first as a part of the Crown of Aragon and subsequently the Spanish Empire , and second as a part of the composite state of the House of Savoy . Its capital was originally Cagliari, in the south of the island, and later Turin, on the...
during the First Italian War of Independence
First Italian War of Independence
The First Italian War of Independence was fought in 1848 between the Kingdom of Sardinia and the Austrian Empire. The war saw main battles at Custoza and Novara in which the Austrians under Radetzky managed to defeat the Piedmontese....
, within the era of Italian unification
Italian unification
Italian unification was the political and social movement that agglomerated different states of the Italian peninsula into the single state of Italy in the 19th century...
. Lasting the whole day of 22 March 1849 and ending at dawn on 23 March, it resulted in a severe defeat and retreat of the Piedmontese (Sardinian) army.

An uneasy armistice made in 1848 between Austria and Sardinia lasted less than seven months, before Charles Albert, King of Sardinia, denounced the truce on 12 March 1849. The Austrian army took the military initiative in Lombardy
Lombardy
Lombardy is one of the 20 regions of Italy. The capital is Milan. One-sixth of Italy's population lives in Lombardy and about one fifth of Italy's GDP is produced in this region, making it the most populous and richest region in the country and one of the richest in the whole of Europe...
. Under the command of Field Marshal Joseph Radetzky von Radetz
Joseph Radetzky von Radetz
Johann Josef Wenzel Graf Radetzky von Radetz was a Czech nobleman and Austrian general, immortalised by Johann Strauss I's Radetzky March...
, it seized the fortress town of Mortara.

The seizure of Mortara led to a battle between Austrian and Piedmontese troops at Novara
Novara
Novara is the capital city of the province of Novara in the Piedmont region in northwest Italy, to the west of Milan. With c. 105,000 inhabitants, it is the second most populous city in Piedmont after Turin. It is an important crossroads for commercial traffic along the routes from Milan to Turin...
, 28 miles (45 km) west of Milan
Milan
Milan is the second-largest city in Italy and the capital city of the region of Lombardy and of the province of Milan. The city proper has a population of about 1.3 million, while its urban area, roughly coinciding with its administrative province and the bordering Province of Monza and Brianza ,...
. 70,000 Austrian troops, more disciplined than the 85,000 Piedmontese, thoroughly routed their opponent as they had at the Battle of Custoza
Battle of Custoza (1848)
The Battle of Custoza was fought on July 24 and 25 1848 during the first Italian War of Independence between the armies of the Austrian Empire, led by Field Marshal Radetzky, and of the Kingdom of Sardinia, led by King Charles Albert of Piedmont....
the previous year. Piedmont also suffered from a lack of support from the smaller Italian states. General Girolamo Ramorino
Girolamo Ramorino
General Girolamo Ramorino was born in Genoa, in northern Italy.-Career:In the Napoleonic Wars, he fought under Napoleon in Russia.He later took part in the 1821 Piedmont uprising in Italy....
was accused of disobeying orders before the Battle of Novara, and, that same year, he was executed
Execution by firing squad
Execution by firing squad, sometimes called fusillading , is a method of capital punishment, particularly common in the military and in times of war.Execution by shooting is a fairly old practice...
.

The Piedmontese were driven back to Borgomanero at the foot of the Alps
Alps
The Alps is one of the great mountain range systems of Europe, stretching from Austria and Slovenia in the east through Italy, Switzerland, Liechtenstein and Germany to France in the west....
, and the Austrian forces occupied Novara, Vercelli
Vercelli
Vercelli is a city and comune of about 47,000 inhabitants in the Province of Vercelli, Piedmont, northern Italy. One of the oldest urban sites in northern Italy, it was founded, according to most historians, around the year 600 BC.The city is situated on the river Sesia in the plain of the river...
and Trino
Trino
Trino is a comune in the Province of Vercelli in the Italian region Piedmont, located about 50 km northeast of Turin and about 15 km southwest of Vercelli, at the foot of the Montferrat hills....
, with the road to the Piedmontese capital, Turin
Turin
Turin is a city and major business and cultural centre in northern Italy, capital of the Piedmont region, located mainly on the left bank of the Po River and surrounded by the Alpine arch. The population of the city proper is 909,193 while the population of the urban area is estimated by Eurostat...
, lying open to them.

Austrian general Baron Julius von Haynau subdued Brescia
Ten Days of Brescia
The Ten Days of Brescia was a revolt which broke out in the northern Italian city of that name, which lasted from March 23 to April 1, 1849.In the early 19th century Brescia was part of the Austrian puppet state called Kingdom of Lombardy-Venetia...
, 54 miles NE of Milan, and Charles Albert abdicated in favor of his son Victor Emmanuel
Victor Emmanuel II of Italy
Victor Emanuel II was king of Sardinia from 1849 and, on 17 March 1861, he assumed the title King of Italy to become the first king of a united Italy since the 6th century, a title he held until his death in 1878...
, who would later become the first king of a unified Italy. Friedrich Engels
Friedrich Engels
Friedrich Engels was a German industrialist, social scientist, author, political theorist, philosopher, and father of Marxist theory, alongside Karl Marx. In 1845 he published The Condition of the Working Class in England, based on personal observations and research...
wrote That, after this defeat, a revolution and proclamation of a republic in Turin is expected, arises from the fact that the attempt is being made to prevent it by the abdication of Charles Albert in favour of his eldest son." A Piedmontese Republic was not created, though a Roman Republic
Roman Republic (19th century)
The Roman Republic was a state declared on February 9, 1849, when the government of Papal States was temporarily substituted by a republican government due to Pope Pius IX's flight to Gaeta. The republic was led by Carlo Armellini, Giuseppe Mazzini and Aurelio Saffi...
had already been proclaimed in February, and there existed a Venetian Republic as well. Charles Albert exiled himself to Oporto, Portugal
Portugal
Portugal , officially the Portuguese Republic is a country situated in southwestern Europe on the Iberian Peninsula. Portugal is the westernmost country of Europe, and is bordered by the Atlantic Ocean to the West and South and by Spain to the North and East. The Atlantic archipelagos of the...
, and died shortly thereafter. 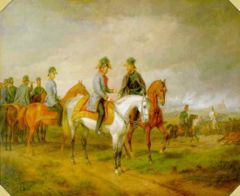 A peace treaty was signed on 9 August. Piedmont was forced to pay an indemnity
Indemnity
An indemnity is a sum paid by A to B by way of compensation for a particular loss suffered by B. The indemnitor may or may not be responsible for the loss suffered by the indemnitee...
of 65 million francs to Austria. A reenactment
Historical reenactment
Historical reenactment is an educational activity in which participants attempt torecreate some aspects of a historical event or period. This may be as narrow as a specific moment from a battle, such as the reenactment of Pickett's Charge at the Great Reunion of 1913, or as broad as an entire...
of the battle occurs every year. The Austrian frigate Novara, which went on a round-the-world scientific expedition between 1857 and 1859, was named after this Austrian victory.