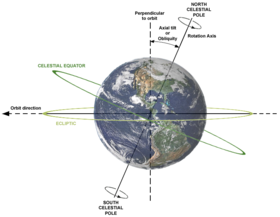 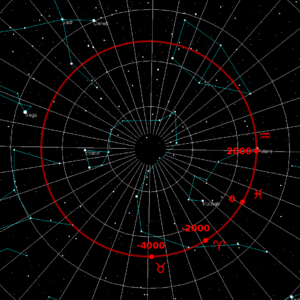 The north and south celestial poles are the two imaginary points in the sky where the Earth's
Earth
Earth is the third planet from the Sun, and the densest and fifth-largest of the eight planets in the Solar System. It is also the largest of the Solar System's four terrestrial planets...
axis of rotation, indefinitely extended, intersects the imaginary rotating sphere of stars called the celestial sphere
Celestial sphere
In astronomy and navigation, the celestial sphere is an imaginary sphere of arbitrarily large radius, concentric with the Earth and rotating upon the same axis. All objects in the sky can be thought of as projected upon the celestial sphere. Projected upward from Earth's equator and poles are the...
. The north and south celestial poles appear directly overhead to an observer at the Earth's North Pole
North Pole
The North Pole, also known as the Geographic North Pole or Terrestrial North Pole, is, subject to the caveats explained below, defined as the point in the northern hemisphere where the Earth's axis of rotation meets its surface...
and South Pole
South Pole
The South Pole, also known as the Geographic South Pole or Terrestrial South Pole, is one of the two points where the Earth's axis of rotation intersects its surface. It is the southernmost point on the surface of the Earth and lies on the opposite side of the Earth from the North Pole...
respectively.

At night the stars appear to drift overhead from east to west, completing a full circuit around the sky in 24 (sidereal
Sidereal time
Sidereal time is a time-keeping system astronomers use to keep track of the direction to point their telescopes to view a given star in the night sky...
) hours. (Of course, exactly the same motion occurs during the day, except that the stars are not visible because of the sun's glare.) This apparent motion is due to the spinning of the Earth on its axis. As the Earth spins, the celestial poles remain nearly fixed in the sky, and all other points seem to rotate around them.

The celestial poles do not remain permanently fixed against the background of the stars. Because of a phenomenon known as the precession of the equinoxes
Precession of the equinoxes
In astronomy, axial precession is a gravity-induced, slow and continuous change in the orientation of an astronomical body's rotational axis. In particular, it refers to the gradual shift in the orientation of Earth's axis of rotation, which, like a wobbling top, traces out a pair of cones joined...
, the poles trace out circles on the celestial sphere, with a period of about 25,700 years. The Earth's axis is also subject to other complex motions which cause the celestial poles to shift slightly over cycles of varying lengths; see nutation
Nutation
Nutation is a rocking, swaying, or nodding motion in the axis of rotation of a largely axially symmetric object, such as a gyroscope, planet, or bullet in flight, or as an intended behavior of a mechanism...
, polar motion
Polar motion
Polar motion of the earth is the movement of Earth's rotational axis across its surface. This is measured with respect to a reference frame in which the solid Earth is fixed...
and axial tilt
Axial tilt
In astronomy, axial tilt is the angle between an object's rotational axis, and a line perpendicular to its orbital plane...
. Finally, over very long periods the positions of the stars themselves change, because of the stars' proper motion
Proper motion
The proper motion of a star is its angular change in position over time as seen from the center of mass of the solar system. It is measured in seconds of arc per year, arcsec/yr, where 3600 arcseconds equal one degree. This contrasts with radial velocity, which is the time rate of change in...
s.

An analogous concept applies to other planets: a planet's celestial poles are the points in the sky where the projection of the planet's axis of rotation intersects the celestial sphere. These points vary because different planets' axes are oriented differently (the apparent positions of the stars also change slightly because of parallax
Parallax
Parallax is a displacement or difference in the apparent position of an object viewed along two different lines of sight, and is measured by the angle or semi-angle of inclination between those two lines. The term is derived from the Greek παράλλαξις , meaning "alteration"...
effects).

See also Pole star
Pole star
The term "Pole Star" usually refers to Polaris, which is the current northern pole star, also known as the North Star.In general, however, a pole star is a visible star, especially a prominent one, that is approximately aligned with the Earth's axis of rotation; that is, a star whose apparent...
.

The north celestial pole currently is within a degree of the bright star Polaris
Polaris
Polaris |Alpha]] Ursae Minoris, commonly North Star or Pole Star, also Lodestar) is the brightest star in the constellation Ursa Minor. It is very close to the north celestial pole, making it the current northern pole star....
(named from the Latin
Latin
Latin is an Italic language originally spoken in Latium and Ancient Rome. It, along with most European languages, is a descendant of the ancient Proto-Indo-European language. Although it is considered a dead language, a number of scholars and members of the Christian clergy speak it fluently, and...
stella polaris, meaning "pole star"). This makes Polaris useful for navigation in the northern hemisphere: not only is it always above the north point of the horizon, but its altitude angle
Altitude
Altitude or height is defined based on the context in which it is used . As a general definition, altitude is a distance measurement, usually in the vertical or "up" direction, between a reference datum and a point or object. The reference datum also often varies according to the context...
is always (nearly) equal to the observer's geographic latitude
Latitude
In geography, the latitude of a location on the Earth is the angular distance of that location south or north of the Equator. The latitude is an angle, and is usually measured in degrees . The equator has a latitude of 0°, the North pole has a latitude of 90° north , and the South pole has a...
. Polaris can, of course, only be seen from locations in the northern hemisphere.

Polaris is near the celestial pole for only a small fraction of the 25,700-year precession cycle, and the fact that it is currently so is purely a coincidence. It will remain a good approximation for about 1,000 years, by which time the pole will have moved to be closer to Alrai (Gamma Cephei
Gamma Cephei
Gamma Cephei , traditionally named Errai, Er Rai, and or Alrai, is a binary star system approximately 45 light-years away in the constellation of Cepheus. Gamma Cephei contains an apparent magnitude of 3.22. The visible part of the system is a stellar class K1III-IV orange subgiant star on its...
). In about 5,500 years, the pole will have moved near the position of the star Alderamin (Alpha Cephei), and in 12,000 years, Vega
Vega
Vega is the brightest star in the constellation Lyra, the fifth brightest star in the night sky and the second brightest star in the northern celestial hemisphere, after Arcturus...
(Alpha Lyrae) will become our north star, but it will be about six degrees from the true north celestial pole.

To find Polaris, face north and locate the Big Dipper
Big Dipper
The Plough, also known as the Big Dipper or the Saptarishi , is an asterism of seven stars that has been recognized as a distinct grouping in many cultures from time immemorial...
(Plough) and Little Dipper asterisms. Looking at the "cup" part of the Big Dipper, imagine that the two stars at the outside edge of the cup form a line pointing upward out of the cup. This line points directly at the star at the tip of the Little Dipper's handle. That star is Polaris, the North Star.

See also: Pole star
Pole star
The term "Pole Star" usually refers to Polaris, which is the current northern pole star, also known as the North Star.In general, however, a pole star is a visible star, especially a prominent one, that is approximately aligned with the Earth's axis of rotation; that is, a star whose apparent...
. 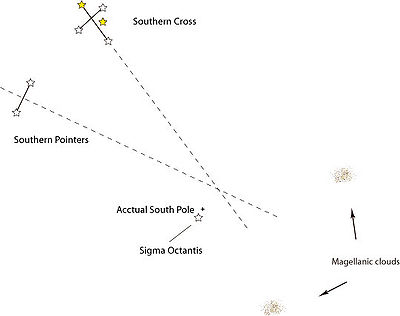 The south celestial pole is visible only from the southern hemisphere. It lies in the dim constellation
Constellation
In modern astronomy, a constellation is an internationally defined area of the celestial sphere. These areas are grouped around asterisms, patterns formed by prominent stars within apparent proximity to one another on Earth's night sky....
Octans
Octans
Octans is a faint constellation the southern sky. Its name is Latin for the eighth part of a circle, but it is named after the octant, a navigational instrument. The constellation was devised by Nicolas Louis de Lacaille in the eighteenth century....
, the Octant. Sigma Octantis
Sigma Octantis
Sigma Octantis is a magnitude 5.6 star in the constellation Octans most notable for being the current South Star. Sigma Octantis is approximately 270 light years from Earth, and is classified as a giant, with a spectral type of F0 III...
is identified as the south pole star, over a degree away from the pole, but with a magnitude of 5.5 it is barely visible on a clear night.


Method one: The Southern Cross

The third method is best for a moonless and cloudless night as it uses two faint 'clouds' in the southern sky. These are marked in astronomy books as Large
Large Magellanic Cloud
The Large Magellanic Cloud is a nearby irregular galaxy, and is a satellite of the Milky Way. At a distance of slightly less than 50 kiloparsecs , the LMC is the third closest galaxy to the Milky Way, with the Sagittarius Dwarf Spheroidal and Canis Major Dwarf Galaxy lying closer to the center...
and Small Magellanic Cloud
Small Magellanic Cloud
The Small Magellanic Cloud is a dwarf galaxy. It has a diameter of about 7,000 light-years and contains several hundred million stars. It has a total mass of approximately 7 billion times the mass of our Sun....
s. These 'clouds' are actually galaxies close to our own Milky Way
Milky Way
The Milky Way is the galaxy that contains the Solar System. This name derives from its appearance as a dim un-resolved "milky" glowing band arching across the night sky...
. Make an equilateral triangle, the third point of which is the south celestial pole.