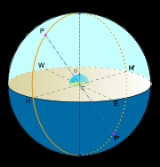 Encyclopedia
This article is about the astronomical concept. For other uses of the word, see Meridian. 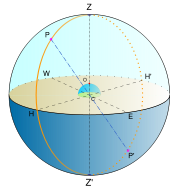 In the sky, a meridian is an imaginary great circle
Great circle
A great circle, also known as a Riemannian circle, of a sphere is the intersection of the sphere and a plane which passes through the center point of the sphere, as opposed to a general circle of a sphere where the plane is not required to pass through the center...
on the celestial sphere
Celestial sphere
In astronomy and navigation, the celestial sphere is an imaginary sphere of arbitrarily large radius, concentric with the Earth and rotating upon the same axis. All objects in the sky can be thought of as projected upon the celestial sphere. Projected upward from Earth's equator and poles are the...
. It passes through the north point on the horizon, through the celestial pole
Celestial pole
The north and south celestial poles are the two imaginary points in the sky where the Earth's axis of rotation, indefinitely extended, intersects the imaginary rotating sphere of stars called the celestial sphere...
, up to the zenith
Zenith
The zenith is an imaginary point directly "above" a particular location, on the imaginary celestial sphere. "Above" means in the vertical direction opposite to the apparent gravitational force at that location. The opposite direction, i.e...
, through the south point on the horizon, and through the nadir
Nadir
The nadir is the direction pointing directly below a particular location; that is, it is one of two vertical directions at a specified location, orthogonal to a horizontal flat surface there. Since the concept of being below is itself somewhat vague, scientists define the nadir in more rigorous...
, and is perpendicular to the local horizon
Horizon
The horizon is the apparent line that separates earth from sky, the line that divides all visible directions into two categories: those that intersect the Earth's surface, and those that do not. At many locations, the true horizon is obscured by trees, buildings, mountains, etc., and the resulting...
. The term "meridian" comes from the Latin meridies, which means both "midday" and "south".

Because it is fixed to the local horizon, stars will appear to drift past the local meridian as the earth spins. You can use an object's right ascension
Right ascension
Right ascension is the astronomical term for one of the two coordinates of a point on the celestial sphere when using the equatorial coordinate system. The other coordinate is the declination.-Explanation:...
and the local sidereal time
Sidereal time
Sidereal time is a time-keeping system astronomers use to keep track of the direction to point their telescopes to view a given star in the night sky...
to determine when it will cross your local meridian, or culminate
Culmination
In astronomy, the culmination of a planet, star, constellation, etc. is the altitude reached when the object transits over an observer's meridian....
(see hour angle
Hour angle
In astronomy and celestial navigation, the hour angle is one of the coordinates used in the equatorial coordinate system to give the position of a point on the celestial sphere....
).