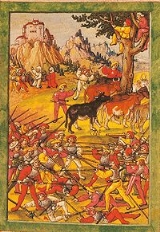 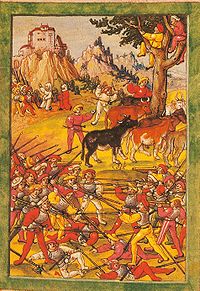 Cattle raiding is the act of stealing
Theft
In common usage, theft is the illegal taking of another person's property without that person's permission or consent. The word is also used as an informal shorthand term for some crimes against property, such as burglary, embezzlement, larceny, looting, robbery, shoplifting and fraud...
cattle
Cattle
Cattle are the most common type of large domesticated ungulates. They are a prominent modern member of the subfamily Bovinae, are the most widespread species of the genus Bos, and are most commonly classified collectively as Bos primigenius...
.

In Australia
Australia
Australia , officially the Commonwealth of Australia, is a country in the Southern Hemisphere comprising the mainland of the Australian continent, the island of Tasmania, and numerous smaller islands in the Indian and Pacific Oceans. It is the world's sixth-largest country by total area...
, such stealing is often referred to as duffing, and the person as a duffer. In North America, especially in cowboy
Cowboy
A cowboy is an animal herder who tends cattle on ranches in North America, traditionally on horseback, and often performs a multitude of other ranch-related tasks. The historic American cowboy of the late 19th century arose from the vaquero traditions of northern Mexico and became a figure of...
culture, cattle theft is dubbed rustling and an individual who engages in it is a rustler.

Historically, the act of cattle rustling is quite ancient, with the first suspected raids conducted over seven thousand years ago.

Cattle raids play an important part in Indo-European mythology; see for example Táin Bó Cúailnge
Táin Bó Cúailnge
is a legendary tale from early Irish literature, often considered an epic, although it is written primarily in prose rather than verse. It tells of a war against Ulster by the Connacht queen Medb and her husband Ailill, who intend to steal the stud bull Donn Cuailnge, opposed only by the teenage...
(Irish), the Rigvedic Panis
Panis
The Panis are a class of demons in the Rigveda, from , a term for "bargainer, miser," especially applied to one who is sparing of sacrificial oblations. The Panis appear in RV 10.108 as watchers over stolen cows. They are located behind the stream Rasā, and sought out by Sarama, the female dog...
(India), and the Homeric Hymn to Hermes
Hermes
Hermes is the great messenger of the gods in Greek mythology and a guide to the Underworld. Hermes was born on Mount Kyllini in Arcadia. An Olympian god, he is also the patron of boundaries and of the travelers who cross them, of shepherds and cowherds, of the cunning of thieves, of orators and...
, who steals the cattle of Apollo
Apollo
Apollo is one of the most important and complex of the Olympian deities in Greek and Roman mythology...
(Greece). These myths are often paired with myths of the abduction of women (compare Helen, Sita
SITA
SITA is a multinational information technology company specialising in providing IT and telecommunication services to the air transport industry...
, Saranyu
Saranyu
Saranya or Saraniya is the wife of Surya, and a goddess of the dawn and the clouds in Hindu mythology, and is sometimes associated with Demeter, Greek goddess of agriculture. According to Max Müller and A...
, The Rape of the Sabine Women
The Rape of the Sabine Women
The Rape of the Sabine Women is an episode in the legendary history of Rome in which the first generation of Roman men acquired wives for themselves from the neighboring Sabine families. The English word "rape" is a conventional translation of Latin raptio, which in this context means "abduction"...
). Abduction of women and theft of livestock were practiced in many of the world's preurbanised
Civilization
Civilization is a sometimes controversial term that has been used in several related ways. Primarily, the term has been used to refer to the material and instrumental side of human cultures that are complex in terms of technology, science, and division of labor. Such civilizations are generally...
cultures, the former likely reaching back to the Paleolithic
Paleolithic
The Paleolithic Age, Era or Period, is a prehistoric period of human history distinguished by the development of the most primitive stone tools discovered , and covers roughly 99% of human technological prehistory...
, and the latter to the earliest domestication of animals in the Neolithic
Neolithic
The Neolithic Age, Era, or Period, or New Stone Age, was a period in the development of human technology, beginning about 9500 BC in some parts of the Middle East, and later in other parts of the world. It is traditionally considered as the last part of the Stone Age...
.

In the American Old West
American Old West
The American Old West, or the Wild West, comprises the history, geography, people, lore, and cultural expression of life in the Western United States, most often referring to the latter half of the 19th century, between the American Civil War and the end of the century...
, rustling was considered a serious offense, and it did frequently result in lynching
Lynching
Lynching is an extrajudicial execution carried out by a mob, often by hanging, but also by burning at the stake or shooting, in order to punish an alleged transgressor, or to intimidate, control, or otherwise manipulate a population of people. It is related to other means of social control that...
by vigilantes.

Mexican
Mexican people
Mexican people refers to all persons from Mexico, a multiethnic country in North America, and/or who identify with the Mexican cultural and/or national identity....
rustlers were a major issue during the American Civil War
American Civil War
The American Civil War was a civil war fought in the United States of America. In response to the election of Abraham Lincoln as President of the United States, 11 southern slave states declared their secession from the United States and formed the Confederate States of America ; the other 25...
, with the Mexican government being accused of supporting the habit, as it was for the American
United States
The United States of America is a federal constitutional republic comprising fifty states and a federal district...
rustlers stealing Mexican cattle from across the border. Failure to brand
Livestock branding
Livestock branding is a technique for marking livestock so as to identify the owner. Originally, livestock branding only referred to a hot brand for large stock, though the term is now also used to refer to other alternative techniques such as freeze branding...
new calves facilitated theft.

Conflict over alleged rustling was a major issue in the Johnson County War
Johnson County War
The Johnson County War, also known as the War on Powder River, was a range war which took place in April 1892 in Johnson County, Natrona County and Converse County in the U.S. state of Wyoming...
in the U.S. state
U.S. state
A U.S. state is any one of the 50 federated states of the United States of America that share sovereignty with the federal government. Because of this shared sovereignty, an American is a citizen both of the federal entity and of his or her state of domicile. Four states use the official title of...
of Wyoming
Wyoming
Wyoming is a state in the mountain region of the Western United States. The western two thirds of the state is covered mostly with the mountain ranges and rangelands in the foothills of the Eastern Rocky Mountains, while the eastern third of the state is high elevation prairie known as the High...
.

The transition from open range to fenced grazing gradually reduced the practice of rustling in North America
North America
North America is a continent wholly within the Northern Hemisphere and almost wholly within the Western Hemisphere. It is also considered a northern subcontinent of the Americas...
. In the 20th century, so called 'suburban rustling' became more common, with rustlers anesthetizing cattle and taking them directly to auction. It often takes place at night, posing problems for law enforcement because on very large ranches it can take several days for loss of cattle to be noticed and reported. Convictions are rare to nonexistent. 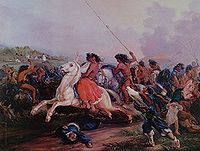 Cattle raiding became a major issue at the end of the 19th century in Argentina, where cattle stolen during malones
Malón
Malón or maloca was a military raiding tactic of the Mapuche peoples from the 17th to the 19th centuries.The "maloca" among the Mapuche is described as a means of obtaining justice, by Juan Ignacio Molina:...
were taken through Rastrillada de los chilenos across the Andes
Andes
The Andes is the world's longest continental mountain range. It is a continual range of highlands along the western coast of South America. This range is about long, about to wide , and of an average height of about .Along its length, the Andes is split into several ranges, which are separated...
to Chile
Chile
Chile ,officially the Republic of Chile , is a country in South America occupying a long, narrow coastal strip between the Andes mountains to the east and the Pacific Ocean to the west. It borders Peru to the north, Bolivia to the northeast, Argentina to the east, and the Drake Passage in the far...
, where they were exchanged for alcoholic beverage
Alcoholic beverage
An alcoholic beverage is a drink containing ethanol, commonly known as alcohol. Alcoholic beverages are divided into three general classes: beers, wines, and spirits. They are legally consumed in most countries, and over 100 countries have laws regulating their production, sale, and consumption...
s and weapons. Several indigenous groups, and outlaws such as the Boroanos
Boroanos
The Boroanos, Borogas o Boroganos where a group of Mapuches native from Boroa in Araucanía that got involved in several conflicts in the northern Patagonian pampas supporting figures such as José Miguel Carrera, the Pincheira brothers and Manuel Rosas...
and Ranquel
Ranquel
The Ranquel are an indigenous tribe from the northern part of La Pampa Province, Argentina, in South America. They are part of the Mapuche, with Puelche origins, Pehuenche and also Patagones from the Günün-a-Küna group.-Name:...
es tribes and the Pincheira brothers
Pincheira brothers
The Pincheira brothers was an infamous royalist outlaw group in Chile and Argentina active from 1818 to 1832. The gang fought initially in the Chilean War of Independence as royalist guerrillas during the Guerra a muerte phase...
, ravaged the southern frontier of Argentina in search of cattle. To prevent the cattle raiding, the Argentine government built a system of trenches called Zanja de Alsina
Zanja de Alsina
Zanja de Alsina were a system of trenches and wooden watchtowers built in the centre and south of the Buenos Aires Province to defend the territories of the federal government against Mapuches malones. The three-meter wide trench was reinforced with 80 small strongholds and garrisons, called...
in the 1870s. Most cattle raids ended after the military campaigns of the Conquest of the Desert
Conquest of the Desert
The Conquest of the Desert was a military campaign directed mainly by General Julio Argentino Roca in the 1870s, which established Argentine dominance over Patagonia, which was inhabited by indigenous peoples...
, and the following partition of Patagonia by Chile and Argentina established by the 1881 Border Treaty.