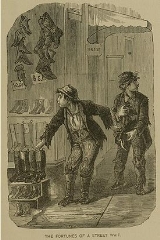 Theft is the name of a statutory offense in California
California
California is a state located on the West Coast of the United States. It is by far the most populous U.S. state, and the third-largest by land area...
, Canada
Canada
Canada is a North American country consisting of ten provinces and three territories. Located in the northern part of the continent, it extends from the Atlantic Ocean in the east to the Pacific Ocean in the west, and northward into the Arctic Ocean...
, England and Wales
England and Wales
England and Wales is a jurisdiction within the United Kingdom. It consists of England and Wales, two of the four countries of the United Kingdom...
, Northern Ireland
Northern Ireland
Northern Ireland is one of the four countries of the United Kingdom. Situated in the north-east of the island of Ireland, it shares a border with the Republic of Ireland to the south and west...
, the Republic of Ireland
Republic of Ireland
Ireland , described as the Republic of Ireland , is a sovereign state in Europe occupying approximately five-sixths of the island of the same name. Its capital is Dublin. Ireland, which had a population of 4.58 million in 2011, is a constitutional republic governed as a parliamentary democracy,...
, and Victoria
Victoria (Australia)
Victoria is the second most populous state in Australia. Geographically the smallest mainland state, Victoria is bordered by New South Wales, South Australia, and Tasmania on Boundary Islet to the north, west and south respectively....
.
The actus reus
Actus reus
Actus reus, sometimes called the external element or the objective element of a crime, is the Latin term for the "guilty act" which, when proved beyond a reasonable doubt in combination with the mens rea, "guilty mind", produces criminal liability in the common law-based criminal law jurisdictions...
of theft is usually defined as an unauthorized taking, keeping or using of another's property which must be accompanied by a mens rea
Mens rea
Mens rea is Latin for "guilty mind". In criminal law, it is viewed as one of the necessary elements of a crime. The standard common law test of criminal liability is usually expressed in the Latin phrase, actus non facit reum nisi mens sit rea, which means "the act does not make a person guilty...
of dishonesty
Dishonesty
Dishonesty is a word which, in common usage, may be defined as the act or to act without honesty. It is used to describe a lack of probity, cheating, lying or being deliberately deceptive or a lack in integrity, knavishness, perfidiosity, corruption or treacherousness...
and/or the intent to permanently deprive the owner or the person with rightful possession of that property or its use.

For example, if X goes to a restaurant and, by mistake, takes Y's scarf instead of her own, she has physically deprived Y of the use of the property (which is the actus reus) but the mistake prevents X from forming the mens rea (i.e., because she believes that she is the owner, she is not dishonest and does not intend to deprive the "owner" of it) so no crime has been committed at this point.

Who should file a case in behalf of the company?

Are corporate criminals are sufficiently punished in india?
More

How can i check if a British ID card is ligitiment. Can you tell me if any card ID number is like this or a fake 123456789
More
x