Encyclopedia
Carbometalation is an organometallic reaction involving the nucleophilic addition
Nucleophilic addition
In organic chemistry, a nucleophilic addition reaction is an addition reaction where in a chemical compound a π bond is removed by the creation of two new covalent bonds by the addition of a nucleophile....
to alkene
Alkene
In organic chemistry, an alkene, olefin, or olefine is an unsaturated chemical compound containing at least one carbon-to-carbon double bond...
s and alkyne
Alkyne
Alkynes are hydrocarbons that have a triple bond between two carbon atoms, with the formula CnH2n-2. Alkynes are traditionally known as acetylenes, although the name acetylene also refers specifically to C2H2, known formally as ethyne using IUPAC nomenclature...
s of a diverse range of organometallic reagents such as organolithium compounds, organocopper compound
Organocopper compound
Organocopper compounds in organometallic chemistry contain carbon to copper chemical bonds. Organocopper chemistry is the science of organocopper compounds describing their physical properties, synthesis and reactions...
s and Grignard reagents according to the following general alkyne scheme:

The addition can yield the cis or trans isomer and with unsymmetrical alkynes the organometallic compound can add in two different way thus control of regioselectivity
Regioselectivity
In chemistry, regioselectivity is the preference of one direction of chemical bond making or breaking over all other possible directions. It can often apply to which of many possible positions a reagent will affect, such as which proton a strong base will abstract from an organic molecule, or where...
is important. 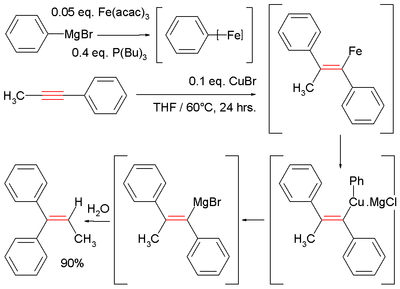 Another demonstration of this reaction type is an alternative route to tamoxifen
Tamoxifen
Tamoxifen is an antagonist of the estrogen receptor in breast tissue via its active metabolite, hydroxytamoxifen. In other tissues such as the endometrium, it behaves as an agonist, hence tamoxifen may be characterized as a mixed agonist/antagonist...
starting from diphenylacetylene
Diphenylacetylene
Diphenylacetylene is the chemical compound C6H5C≡CC6H5. The molecule consists of phenyl groups attached to both ends of an alkyne. It is a colorless crystalline material that is widely used as a building block in organic and as a ligand in organometallic chemistry.-Preparation:Several...
and ethyllithium: 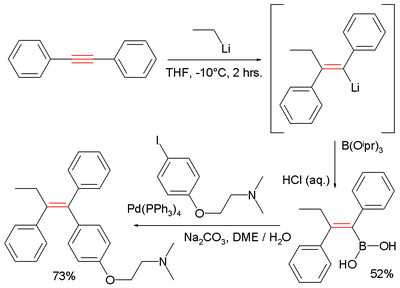 The capturing electrophile here is triisopropyl borate
Borate
Borates are chemical compounds which contain oxoanions of boron in oxidation state +3. The simplest borate ion, BO33−, has a trigonal planar structure. Other borates are made up of trigonal BO3 or tetrahedral BO4 structural units, sharing oxygen atoms...
forming the boronic acid
Boronic acid
A boronic acid is an alkyl or aryl substituted boric acid containing a carbon–boron bond belonging to the larger class of organoboranes. Boronic acids act as Lewis acids. Their unique feature is that they are capable of forming reversible covalent complexes with sugars, amino acids, hydroxamic...
R-B(OH)2. The second step completing tamoxifen is a Suzuki reaction
Suzuki reaction
The Suzuki reaction is the organic reaction of an aryl- or vinyl-boronic acid with an aryl- or vinyl-halide catalyzed by a palladium complex. It is widely used to synthesize poly-olefins, styrenes, and substituted biphenyls, and has been extended to incorporate alkyl bromides...
.

This reaction type can be extended to compounds of silicon bonded to a suitable metal in so-called silylmetalation as an extension to hydrosilylation
Hydrosilylation
Hydrosilylation, also called catalytic hydrosilation, describes the addition of Si-H bonds across unsaturated bonds. Ordinarily the reaction is conducted catalytically and usually the substrates are unsaturated organic compounds. Alkenes and alkynes give alkyl and vinyl silanes; aldehydes and...
. In one study a zinc
Zinc
Zinc , or spelter , is a metallic chemical element; it has the symbol Zn and atomic number 30. It is the first element in group 12 of the periodic table. Zinc is, in some respects, chemically similar to magnesium, because its ion is of similar size and its only common oxidation state is +2...
ate complex
Ate complex
An ate complex in chemistry is a salt formed by reaction of a Lewis acid with a base whereby the central atom increases its valence . Often in chemical nomenclature the phrase ate is suffixed to the element in question. For example, the ate complex of a boron compound is called a borate...
is formed from dimethylphenylsilyllithium, 2,2'-biphenol, zinc chloride
Zinc chloride
Zinc chloride is the name of chemical compound with the formula ZnCl2 and its hydrates. Zinc chlorides, of which nine crystalline forms are known, are colorless or white, and are highly soluble in water. ZnCl2 itself is hygroscopic and even deliquescent. Samples should therefore be protected from...
and the Grignard reagent of tert-butylchloride which is capable of silylmetalation to styrene with 100% regioselectivity
Regioselectivity
In chemistry, regioselectivity is the preference of one direction of chemical bond making or breaking over all other possible directions. It can often apply to which of many possible positions a reagent will affect, such as which proton a strong base will abstract from an organic molecule, or where...
: 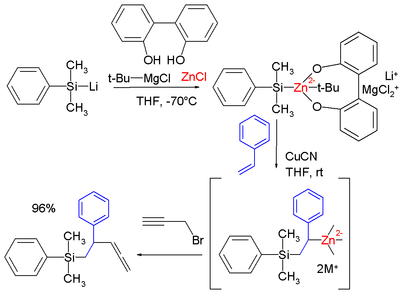 The intermediate complex can be captured with many electrophile
Electrophile
In general electrophiles are positively charged species that are attracted to an electron rich centre. In chemistry, an electrophile is a reagent attracted to electrons that participates in a chemical reaction by accepting an electron pair in order to bond to a nucleophile...
s such as propargyl bromide
Propargyl chloride
Propargyl chloride, or 3-chloro-1-propyne, is a highly toxic and flammable clear brown liquid with chemical formula CHCCH2Cl. It is miscible with benzene or ethanol and insoluble in water. Its refractive index is 1.4350...
(pictured, forming the allene
Allene
An allene is a compound in which one carbon atom has double bonds with each of its two adjacent carbon centres. Allenes are classified as polyenes with cumulated dienes. The parent compound of allene is propadiene. Compounds with an allene-type structure but with more than three carbon atoms are...
), benzoyl chloride
Benzoyl chloride
Benzoyl chloride, also known as benzenecarbonyl chloride, is an organochlorine compound with the formula C6H5COCl. It is a colourless, fuming liquid with an irritating odour...
and allyl bromide
Allyl bromide
Allyl bromide is an organic halide. Its refractive index is 1.4697 . Allyl bromide is an alkylating agent used in synthesis of polymers, pharmaceuticals, allyls and other organic compounds. Physically, allyl bromide is a clear liquid with an intense, acrid, and persistent smell...
.
The source of this article is wikipedia, the free encyclopedia.  The text of this article is licensed under the GFDL.