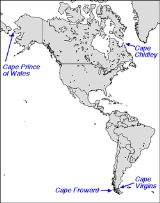 Encyclopedia
Cape Chidley is a headland
Headlands and bays
Headlands and bays are two related features of the coastal environment.- Geology and geography :Headlands and bays are often found on the same coastline. A bay is surrounded by land on three sides, whereas a headland is surrounded by water on three sides. Headlands are characterized by high,...
located on the eastern shore of Killiniq Island
Killiniq Island
Killiniq Island is a small, remote island in northeastern Canada. Located at the extreme northern tip of Labrador between Ungava Bay and the Labrador Sea, it is notable in that it contains the only land border between Nunavut territory and the province of Newfoundland and Labrador...
, Canada
Canada
Canada is a North American country consisting of ten provinces and three territories. Located in the northern part of the continent, it extends from the Atlantic Ocean in the east to the Pacific Ocean in the west, and northward into the Arctic Ocean...
at the northeastern tip of the Labrador Peninsula
Labrador Peninsula
The Labrador Peninsula is a large peninsula in eastern Canada. It is bounded by the Hudson Bay to the west, the Hudson Strait to the north, the Labrador Sea to the east, and the Gulf of Saint Lawrence to the south-east...
.

Originally, Cape Chidley was meant to be the site for a long range radar station called "N-30." It was to fall within plans for the Pinetree Line
Pinetree Line
The Pinetree Line was a series of radar stations located across the northern United States and southern Canada at about the 50th parallel north, along with a number of other stations located on the Atlantic and Pacific coasts. Run by NORAD , over half were manned by United States Air Force...
, a series of radar stations across the 50th parallel. Supplies were moved to the site by ship during 1951-52, but late 1952-early 1953 the site was moved to Resolution Island.

Sometimes spelled Cape Chudleigh, Cape Chidley is sometimes misrepresented as being located on the interprovincial border between Quebec
Quebec
Quebec or is a province in east-central Canada. It is the only Canadian province with a predominantly French-speaking population and the only one whose sole official language is French at the provincial level....
and Newfoundland and Labrador. Newfoundland
Dominion of Newfoundland
The Dominion of Newfoundland was a British Dominion from 1907 to 1949 . The Dominion of Newfoundland was situated in northeastern North America along the Atlantic coast and comprised the island of Newfoundland and Labrador on the continental mainland...
, having been a separate country at the time that Canada's Arctic islands were assigned in this manner, shared a boundary on Killiniq Island as the territory of Labrador included the entire Atlantic watershed of the Labrador Peninsula and its islands. 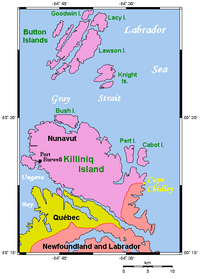 The closest community to Cape Chidley is Port Burwell, Nunavut. Killiniq Island itself is separated from mainland North America by the narrow McLelan Strait.

The Torngat Mountains
Torngat Mountains
The Torngat Mountains are a mountain range on the Labrador Peninsula at the northern tip of Newfoundland and Labrador and eastern Quebec. They are part of the Arctic Cordillera. This is the peninsula that separates Ungava Bay from the Atlantic Ocean....
run along the coast of Labrador and terminate at Killiniq Island. The top of the knoll forming the headland at Cape Chidley has an elevation of 350 m (1,148.3 ft) making the cape considerably higher than either of its two flanking headlands.