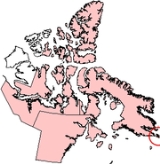 It was during site investigations between 1987 and 1990 that contamination at the site was first discovered. The contamination originates largely from spills from the radar equipment, which used polychlorinated biphenyl
Polychlorinated biphenyl
Polychlorinated biphenyls are a class of organic compounds with 2 to 10 chlorine atoms attached to biphenyl, which is a molecule composed of two benzene rings. The chemical formula for PCBs is C12H10-xClx...
s (PCBs) as insulators. Other pollutants include unused transformer fluids, hydrocarbon
Hydrocarbon
In organic chemistry, a hydrocarbon is an organic compound consisting entirely of hydrogen and carbon. Hydrocarbons from which one hydrogen atom has been removed are functional groups, called hydrocarbyls....
s, asbestos
Asbestos
Asbestos is a set of six naturally occurring silicate minerals used commercially for their desirable physical properties. They all have in common their eponymous, asbestiform habit: long, thin fibrous crystals...
and heavy metals
Heavy metals
A heavy metal is a member of a loosely-defined subset of elements that exhibit metallic properties. It mainly includes the transition metals, some metalloids, lanthanides, and actinides. Many different definitions have been proposed—some based on density, some on atomic number or atomic weight,...
in the buildings and sprinkled throughout the site. Resolution Island has been identified as having the highest level of PCB contamination of all former military sites that fall under Indian and Northern Affairs Canada
Indian and Northern Affairs Canada
The Department of Aboriginal Affairs and Northern Development is the department of the government of Canada with responsibility for policies relating to Aboriginal peoples...
’s (INAC) responsibility in the North.