The majority of soldiers of the Canadian Corps were British-born until near the end of the war, when the number of those of Canadian birth who had enlisted rose to 51 percent. They were mostly volunteers, as conscription was not implemented until the end of the war (see Conscription Crisis of 1917
Conscription Crisis of 1917
The Conscription Crisis of 1917 was a political and military crisis in Canada during World War I.-Background:...
). Ultimately, only 24,132 conscripts made it to France before 11 November 1918. In the later stages of the war the Canadian Corps was regarded by friend and foe alike as one of the most effective Allied military formations on the Western Front
Western Front (World War I)
Following the outbreak of World War I in 1914, the German Army opened the Western Front by first invading Luxembourg and Belgium, then gaining military control of important industrial regions in France. The tide of the advance was dramatically turned with the Battle of the Marne...
along with the Australians and New Zealanders. 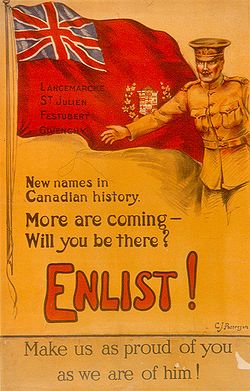 Although the corps was within and under the command of the British Expeditionary Force, there was considerable political pressure in Canada, especially following the Battle of the Somme, in 1916, to have the corps fight as a single unit rather than have the divisions spread out through the whole army. The corps was commanded by Lieutenant General
Lieutenant General
Lieutenant General is a military rank used in many countries. The rank traces its origins to the Middle Ages where the title of Lieutenant General was held by the second in command on the battlefield, who was normally subordinate to a Captain General....
Sir E.A.H. Alderson, until 1916. Political considerations caused command to be passed to Lieutenant-General Sir Julian Byng. When Byng was promoted to a higher command during the summer of 1917, he was succeeded by General Sir Arthur Currie
Arthur Currie
Sir Arthur William Currie GCMG, KCB , was a Canadian general during World War I. He had the unique distinction of starting his military career on the very bottom rung as a pre-war militia gunner before rising through the ranks to become the first Canadian commander of the four divisions of the...
, the commander of the 1st Division, giving the corps its first Canadian commander. Currie was able to reconcile the desire for national independence with the need for Allied integration. He resisted pressure to replace all British officers in high-ranking positions, retaining those who were successful until they could be replaced by trained and experienced Canadians.

The Canadian Corps captured Vimy Ridge in April, 1917
Battle of Vimy Ridge
The Battle of Vimy Ridge was a military engagement fought primarily as part of the Battle of Arras, in the Nord-Pas-de-Calais region of France, during the First World War. The main combatants were the Canadian Corps, of four divisions, against three divisions of the German Sixth Army...
, in a daring attack that was a turning point in the war, and as Currie called it, "the grandest day the Corps ever had. During the German Spring Offensive
Spring Offensive
The 1918 Spring Offensive or Kaiserschlacht , also known as the Ludendorff Offensive, was a series of German attacks along the Western Front during World War I, beginning on 21 March 1918, which marked the deepest advances by either side since 1914...
of the spring and summer of 1918, the Canadian Corps supported British and French soldiers while they held the Germans back. Between August 8 and 11, 1918, the corps spearheaded the offensive during the Battle of Amiens. Here a significant defeat was inflicted on the Germans, causing the German commander-in-chief, General Erich Ludendorff
Erich Ludendorff
Erich Friedrich Wilhelm Ludendorff was a German general, victor of Liège and of the Battle of Tannenberg...
, to call August 8 "the black day of the German army." This battle marked the start of the period of the war referred to as "Canada's Hundred Days
Canada's Hundred Days
Canada’s Hundred Days was a series of attacks made along the Western Front by the Canadian Corps during the Hundred Days Offensive of World War I...
". After Amiens, the Canadian Corps continued to lead the vanguard of an Allied push that ultimately ended on 11 November 1918 at Mons where the British Empire had first met in conflict with Imperial German forces in 1914.

At the end of war the Canadian 1st and 2nd Divisions took part in the occupation of Germany and the corps was eventually demobilized in 1919. Upon their return home the veterans were greeted by large and welcoming crowds all across the country. Total fatal battle casualties during the war was 56,638, 13.5% of the 418,052 sent overseas and 9.26% of the 611,711 who enlisted.


Canadian Divisions under the Canadian Corps

Following its formation in late 1915, the Canadian Corps readied to fight major battles as a unified entity, beginning in 1916. Additional actions were fought by one or more units of the corps (see separate listings for the divisions, above). Major battles fought by the corps were the following:

The military effectiveness of the corps has been extensively analyzed. The corps evolved steadily following the 1915 summer campaign. As Godefroy (2006) notes, the Canadian Expeditionary Force
Canadian Expeditionary Force
The Canadian Expeditionary Force was the designation of the field force created by Canada for service overseas in the First World War. Units of the C.E.F. were divided into field formation in France, where they were organized first into separate divisions and later joined together into a single...
"worked ceaselessly to convert all of its available political and physical resources into fighting power." One striking feature of the corps' evolution was its ability to exploit all opportunities for learning. This was a corps-wide activity, involving all levels from the commander
Commanding officer
The commanding officer is the officer in command of a military unit. Typically, the commanding officer has ultimate authority over the unit, and is usually given wide latitude to run the unit as he sees fit, within the bounds of military law...
to the private soldier
Private (rank)
A Private is a soldier of the lowest military rank .In modern military parlance, 'Private' is shortened to 'Pte' in the United Kingdom and other Commonwealth countries and to 'Pvt.' in the United States.Notably both Sir Fitzroy MacLean and Enoch Powell are examples of, rare, rapid career...
. This ability to learn from allied successes and mistakes made the corps increasingly successful. Doctrine
Military doctrine
Military doctrine is the concise expression of how military forces contribute to campaigns, major operations, battles, and engagements.It is a guide to action, not hard and fast rules. Doctrine provides a common frame of reference across the military...
was tested in limited engagements and, if proven effectual, developed for larger scale battles. Following each engagement, lessons were recorded, analyzed and disseminated to all units. Doctrine and tactics that were ineffective or cost too many lives were discarded and new methods developed. This learning process, combined with technical innovation and competent senior leadership in theatre
Theater (warfare)
In warfare, a theater, is defined as an area or place within which important military events occur or are progressing. The entirety of the air, land, and sea area that is or that may potentially become involved in war operations....
created one of the most effective allied fighting forces on the Western Front.