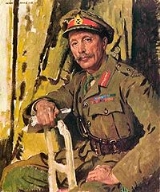 Encyclopedia
Major General
Major General
Major general or major-general is a military rank used in many countries. It is derived from the older rank of sergeant major general. A major general is a high-ranking officer, normally subordinate to the rank of lieutenant general and senior to the ranks of brigadier and brigadier general...
Sir David Watson, (7 February 1869 – 19 February 1922) was a Canadian
Canada
Canada is a North American country consisting of ten provinces and three territories. Located in the northern part of the continent, it extends from the Atlantic Ocean in the east to the Pacific Ocean in the west, and northward into the Arctic Ocean...
journalist, newspaper owner, and general.

Born in Quebec City
Quebec City
Quebec , also Québec, Quebec City or Québec City is the capital of the Canadian province of Quebec and is located within the Capitale-Nationale region. It is the second most populous city in Quebec after Montreal, which is about to the southwest...
, Quebec
Quebec
Quebec or is a province in east-central Canada. It is the only Canadian province with a predominantly French-speaking population and the only one whose sole official language is French at the provincial level....
, the son of William Watson and Jane Grant, Watson was a journalist with the Quebec Morning Chronicle (later called just Quebec Chronicle). He later became general manager of the paper and general manager of its publisher.

He started his military career as a private in the 8th Regiment, Royal Rifles. He was promoted to lieutenant and then to captain in 1903, major in 1910, and lieutenant-colonel in 1912. In 1914, he enlisted in the Canadian Expeditionary Force
Canadian Expeditionary Force
The Canadian Expeditionary Force was the designation of the field force created by Canada for service overseas in the First World War. Units of the C.E.F. were divided into field formation in France, where they were organized first into separate divisions and later joined together into a single...
and was soon given command of the 2nd Battalion, CEF
2nd (Eastern Ontario Regiment) Battalion, CEF
The 2nd Battalion of the Canadian Expeditionary Force was created in response to the First World War. The battalion comprised local militia in many regions of Ontario . Men came from as far away as Sault Ste. Marie to join in Canada’s military endeavor...
. He was promoted to Brigadier General in 1915 and took command of the 5th Brigade, 2nd Canadian Division
2nd Canadian Division
The 2nd Canadian Division was an infantry formation that saw service in the First World War. A 2nd Canadian Infantry Division was raised for the Second World War.-History:...
. He was promoted to Major-General and took command of the 4th Canadian Division
4th Canadian Division
The Canadian Corps - 4th Canadian Division – World War I:The 4th Canadian Division was formed in the Britain in April 1916 from several existing units and others scheduled to arrive shortly thereafter. Under the command of Major-General David Watson, the Division embarked for France in August of...
upon its creation in 1916. He led his various commands in most of the major Canadian battles of World War I including Second Ypres
Second Battle of Ypres
The Second Battle of Ypres was the first time Germany used poison gas on a large scale on the Western Front in the First World War and the first time a former colonial force pushed back a major European power on European soil, which occurred in the battle of St...
, the Somme, Vimy Ridge
Battle of Vimy Ridge
The Battle of Vimy Ridge was a military engagement fought primarily as part of the Battle of Arras, in the Nord-Pas-de-Calais region of France, during the First World War. The main combatants were the Canadian Corps, of four divisions, against three divisions of the German Sixth Army...
, Passchendaele, Amiens, Second Arras, and Cambrai
Battle of Cambrai (1918)
The Battle of Cambrai was a battle between troops of the British First, Third and Fourth Armies and German Empire forces during the Hundred Days Offensive of the First World War. The battle took place in and around the French city of Cambrai, between 8 and 10 October 1918...
.

In late 1917, he and fellow general Victor Odlum
Victor Odlum
Victor Wentworth Odlum, C.B., C.M.G., D.S.O. was a Canadian journalist, soldier, and diplomat. He was a prominent member of the business and political elite of Vancouver, British Columbia from the 1920s until his death in 1971...
saved their commanding officer, General Arthur Currie
Arthur Currie
Sir Arthur William Currie GCMG, KCB , was a Canadian general during World War I. He had the unique distinction of starting his military career on the very bottom rung as a pre-war militia gunner before rising through the ranks to become the first Canadian commander of the four divisions of the...
, from a career-ending charge of embezzlement by lending Currie enough money so that he could repay a large sum he had borrowed from regimental funds before the war.

After the war, he resumed his job at the Quebec Chronicle and became the majority owner. He was also chairman of the Quebec Harbour Commission. He died in 1922.