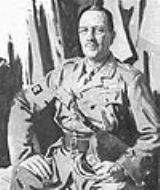 Encyclopedia
Sir Henry Edward Burstall, (26 August 1870 – 8 February 1945) was a Canadian
Canada
Canada is a North American country consisting of ten provinces and three territories. Located in the northern part of the continent, it extends from the Atlantic Ocean in the east to the Pacific Ocean in the west, and northward into the Arctic Ocean...
general.

During World War I
World War I
World War I , which was predominantly called the World War or the Great War from its occurrence until 1939, and the First World War or World War I thereafter, was a major war centred in Europe that began on 28 July 1914 and lasted until 11 November 1918...
, he was a brevet colonel and Brigadier-General in command of Artillery, 1st Canadian Division
1st Canadian Division
Formed in August 1914, the 1st Canadian Division was a formation of the Canadian Expeditionary Force. The division was initially made up from provisional battalions that were named after their province of origin but these titles were dropped before the division arrived in Britain on October 14,...
from 1914 to 1915. He was promoted to Major-General and was General Officer Commanding
General Officer Commanding
General Officer Commanding is the usual title given in the armies of Commonwealth nations to a general officer who holds a command appointment. Thus, a general might be the GOC II Corps or GOC 7th Armoured Division...
(GOC) of the Royal Canadian Artillery from 1915 to 1916. From 1916 to 1918, he was GOC 2nd Canadian Division
2nd Canadian Division
The 2nd Canadian Division was an infantry formation that saw service in the First World War. A 2nd Canadian Infantry Division was raised for the Second World War.-History:...
. After the war, he was Quartermaster-General at Department of National Defence from 1919 to 1920. From 1920 to 1925. he was the Inspector-General. He retired in 1925 settling in England. He died in 1945 in Headbourne Worthy
Headbourne Worthy
Headbourne Worthy is a village and former manor within the City of Winchester district of Hampshire, England.-External links:***...
, Hampshire
Hampshire
Hampshire is a county on the southern coast of England in the United Kingdom. The county town of Hampshire is Winchester, a historic cathedral city that was once the capital of England. Hampshire is notable for housing the original birthplaces of the Royal Navy, British Army, and Royal Air Force...
, England
England
England is a country that is part of the United Kingdom. It shares land borders with Scotland to the north and Wales to the west; the Irish Sea is to the north west, the Celtic Sea to the south west, with the North Sea to the east and the English Channel to the south separating it from continental...
.

He was created a Companion of the Order of the Bath
Order of the Bath
The Most Honourable Order of the Bath is a British order of chivalry founded by George I on 18 May 1725. The name derives from the elaborate mediæval ceremony for creating a knight, which involved bathing as one of its elements. The knights so created were known as Knights of the Bath...
in 1915, a Companion of the Order of St Michael and St George
Order of St Michael and St George
The Most Distinguished Order of Saint Michael and Saint George is an order of chivalry founded on 28 April 1818 by George, Prince Regent, later George IV of the United Kingdom, while he was acting as Prince Regent for his father, George III....
in 1917, Knight Commander of the Order of the Bath in 1918, and Knight Commander of the Order of St Michael and St George in 1919. The town of Burstall, Saskatchewan
Burstall, Saskatchewan
Burstall is a small town in southwestern Saskatchewan, Canadawith a population of approximately 500. During summer the local Lions Club organizes an activity known as Summer Slam. The main economies in the area are natural gas as well as wheat and cattle farming. The area was originally settled by...
, incorporated as a village in 1921, is named in his honour.
Mount Burstall (2760m), which part of the Spray Range, Kananaskis Park, Alberta
Alberta
Alberta is a province of Canada. It had an estimated population of 3.7 million in 2010 making it the most populous of Canada's three prairie provinces...
was named in 1918 in his honour. Latitude 50; 46; 20 Longitude 115; 19; 30.