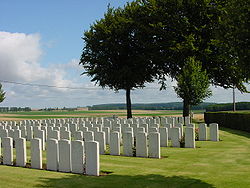 .
Situated in a park, on land donated by the Comte de Franqueville, the Mayor of Bourlon at the War's end, the Canadian Bourlon Wood Memorial site is located at the end of the 'Avenue du Monument' in the southwestern corner of the village of Bourlon. The park is a beautiful series of terraces lined with ancient lime tree
Tilia
Tilia is a genus of about 30 species of trees native throughout most of the temperate Northern Hemisphere. The greatest species diversity is found in Asia, and the genus also occurs in Europe and eastern North America, but not western North America...
s that were nursed back to health after having been shattered by shellfire
Artillery
Originally applied to any group of infantry primarily armed with projectile weapons, artillery has over time become limited in meaning to refer only to those engines of war that operate by projection of munitions far beyond the range of effect of personal weapons...
during the battle for Bourlon Wood. The grey granite
Granite
Granite is a common and widely occurring type of intrusive, felsic, igneous rock. Granite usually has a medium- to coarse-grained texture. Occasionally some individual crystals are larger than the groundmass, in which case the texture is known as porphyritic. A granitic rock with a porphyritic...
block monument is set at the top of the hill in a glade of lawn upon a low circular flagstone
Flagstone
Flagstone, is a generic flat stone, usually used for paving slabs or walkways, patios, fences and roofing. It may be used for memorials, headstones, facades and other constructions. The name derives from Middle English flagge meaning turf, perhaps from Old Norse flaga meaning slab.Flagstone is a...
terrace.