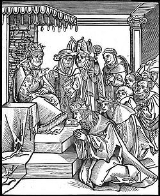 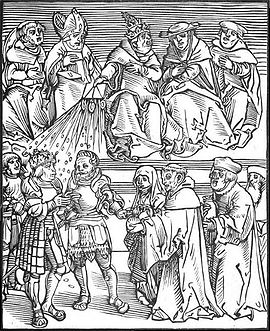 Caesaropapism is the idea of combining the power of secular
Secularity
Secularity is the state of being separate from religion.For instance, eating and bathing may be regarded as examples of secular activities, because there may not be anything inherently religious about them...
government with, or making it superior to, the spiritual authority of the Church; especially concerning the connection of the Church with government. The term caesaropapism (Cäseropapismus) was coined by Max Weber
Max Weber
Karl Emil Maximilian "Max" Weber was a German sociologist and political economist who profoundly influenced social theory, social research, and the discipline of sociology itself...
, who defined it as follows: “a secular, caesaropapist ruler... exercises supreme authority in ecclesiastic matters by virtue of his autonomous legitimacy”. According to Weber's political sociology, caesaropapism entails “the complete subordination of priests to secular power.”

In its extreme form, caesaropapism is a political theory in which the head of state, notably the Emperor ('Caesar', by extension an 'equal' King), is also the supreme head of the church ('papa', pope or analogous religious leader). In this form, it inverts theocracy
Theocracy
Theocracy is a form of organization in which the official policy is to be governed by immediate divine guidance or by officials who are regarded as divinely guided, or simply pursuant to the doctrine of a particular religious sect or religion....
(or hierocracy in Weber) in which institutions of the Church control the state.


Caesaropapism in the Eastern Church

Caesaropapism existed in the Eastern Orthodox Church in Turkey
Turkey
Turkey , known officially as the Republic of Turkey , is a Eurasian country located in Western Asia and in East Thrace in Southeastern Europe...
until 1923 and in Cyprus
Cyprus
Cyprus , officially the Republic of Cyprus , is a Eurasian island country, member of the European Union, in the Eastern Mediterranean, east of Greece, south of Turkey, west of Syria and north of Egypt. It is the third largest island in the Mediterranean Sea.The earliest known human activity on the...
until 1977, when Archbishop Makarios III died. However, in no way is caesaropapism a part of Orthodox
Eastern Orthodox Church
The Orthodox Church, officially called the Orthodox Catholic Church and commonly referred to as the Eastern Orthodox Church, is the second largest Christian denomination in the world, with an estimated 300 million adherents mainly in the countries of Belarus, Bulgaria, Cyprus, Georgia, Greece,...
dogma
Dogma
Dogma is the established belief or doctrine held by a religion, or a particular group or organization. It is authoritative and not to be disputed, doubted, or diverged from, by the practitioners or believers...
. The historical reality, as opposed to doctrinal endorsement or dogmatic definition, of caesaropapism stems from, according to Metropolitan Kallistos Ware
Timothy Ware
Kallistos Ware is an English bishop within the Greek Orthodox Ecumenical Patriarchate and one of the best known contemporary Eastern Orthodox theologians. From 1982 to his retirement in 2001 he held the position of Bishop of Diokleia...
, the confusion of the Byzantine Empire with the Kingdom of God
Kingdom of God
The Kingdom of God or Kingdom of Heaven is a foundational concept in the Abrahamic religions: Judaism, Christianity and Islam.The term "Kingdom of God" is found in all four canonical gospels and in the Pauline epistles...
and the zeal of the Byzantines "to establish here on earth a living icon of God's government in heaven."


Caesaropapism in the Western Church 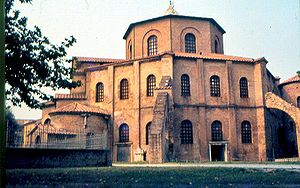 The Byzantine Papacy was a period of Byzantine
Byzantine Empire
The Byzantine Empire was the Eastern Roman Empire during the periods of Late Antiquity and the Middle Ages, centred on the capital of Constantinople. Known simply as the Roman Empire or Romania to its inhabitants and neighbours, the Empire was the direct continuation of the Ancient Roman State...
domination of the papacy
Pope
The Pope is the Bishop of Rome, a position that makes him the leader of the worldwide Catholic Church . In the Catholic Church, the Pope is regarded as the successor of Saint Peter, the Apostle...
from 537 to 752, when popes required the approval of the Byzantine Emperor for episcopal consecration, and many popes were chosen from the apocrisiarii
Apocrisiarius
An apocrisiarius, the Latinized form of apokrisiarios , sometimes Anglicized as apocrisiary, was a high diplomatic representative during Late Antiquity and the early medieval period. The corresponding Latin term was responsalis...
(liaisons from the pope to the emperor) or the inhabitants of Byzantine Greece, Byzantine Syria, or Byzantine Sicily. Justinian I
Justinian I
Justinian I ; , ; 483– 13 or 14 November 565), commonly known as Justinian the Great, was Byzantine Emperor from 527 to 565. During his reign, Justinian sought to revive the Empire's greatness and reconquer the lost western half of the classical Roman Empire.One of the most important figures of...
conquered the Italian peninsula in the Gothic War (535–554) and appointed the next three popes
Papal selection before 1059
There was no fixed process for papal selection before 1059. Popes, the bishops of Rome and the leaders of the Catholic Church, were often appointed by their predecessors or secular rulers...
, a practice that would be continued by his successors and later be delegated to the Exarchate of Ravenna
Exarchate of Ravenna
The Exarchate of Ravenna or of Italy was a centre of Byzantine power in Italy, from the end of the 6th century to 751, when the last exarch was put to death by the Lombards.-Introduction:...
. 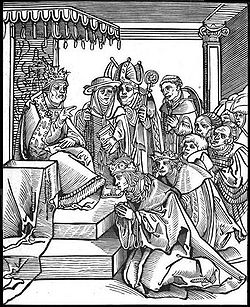 The term is just as applicable to similar reports between secular and religious power when the titles of one or both office holders are different, and even at a smaller scale than the universal Church, and is even used when the control is less than total. Thus the French kings are a good example of a non-imperial Catholic monarchy that was rather successful in getting a great say in the French Catholic Church (such as commendatory
In Commendam
In canon law, commendam was a form of transferring an ecclesiastical benefice in trust to the custody of a patron...
prelatures) and getting access to significant income from the Church's property; during and around the 'Babylonian Exile' of the papacy in Avignon
Avignon
Avignon is a French commune in southeastern France in the départment of the Vaucluse bordered by the left bank of the Rhône river. Of the 94,787 inhabitants of the city on 1 January 2010, 12 000 live in the ancient town centre surrounded by its medieval ramparts.Often referred to as the...
they even had a heavy hand in the papacy as such; and aspects of Gallicanism
Gallicanism
Gallicanism is the belief that popular civil authority—often represented by the monarchs' authority or the State's authority—over the Catholic Church is comparable to that of the Pope's...
reflect the desire to give even the liturgy (even when Latin was the only language for liturgical ritual in the Latin Rite) a distinctive French flavour.

After the introduction of Protestantism
Protestantism
Protestantism is one of the three major groupings within Christianity. It is a movement that began in Germany in the early 16th century as a reaction against medieval Roman Catholic doctrines and practices, especially in regards to salvation, justification, and ecclesiology.The doctrines of the...
, the immense fermentation caused by the introduction of socially subversive principles into the life of a people would exhaust its revolutionary beginnings, and result in a new form of social and religious order - the residue of the great Protestant upheaval in Europe was territorial or State Religion, based on the religious supremacy of the temporal ruler, in contradistinction to the old order in which the temporal ruler took an oath of obedience to the Catholic Church. Martin Luther
Martin Luther
Martin Luther was a German priest, professor of theology and iconic figure of the Protestant Reformation. He strongly disputed the claim that freedom from God's punishment for sin could be purchased with money. He confronted indulgence salesman Johann Tetzel with his Ninety-Five Theses in 1517...
's first reformatory attempts were radically democratic. He sought to benefit the people at large by curtailing the powers of both Church and State. The German princes, to him, were "usually the biggest fools or the worst scoundrels on earth". In 1523 he wrote: "The people will not, cannot, shall not endure your tyranny and oppression any longer. The world is not now what it was formerly, when you could chase and drive the people like game". This manifesto, addressed to the poorer masses, was taken up by Franz von Sickingen
Franz von Sickingen
Franz von Sickingen was a German knight, one of the most notable figures of the first period of the Reformation.-Biography:He was born at Ebernburg near Bad Kreuznach...
, a Knight of the Empire, who entered the field in execution of its threats. His object was twofold: to strengthen the political power of the knights — the inferior nobility — against the princes, and to open the road to the new Gospel by overthrowing the bishops, but his enterprise had the opposite result: the knights were beaten, lost what influence they had possessed, and the princes were proportionately strengthened. The rising of the peasants likewise turned to the advantage of the princes: the fearful slaughter of Frankenhausen (1525) left the princes without an enemy and the new Gospel without its natural defenders. The victorious princes used their augmented power entirely for their own advantage in opposition to the authority of the emperor and the freedom of the nation.